Truman Capote is one among the best novelists that the literary world has ever had. He wanted to be writer ever since he was a child and often carried a dictionary and notebook and penned stories. He was an average student and did well in subjects which sparked his interest. The author completed basic education and did not pursue higher studies as he did not believe that a professor could influence an individual’s creativity. The broad minded person that he was, this writer did not believe in hiding his homosexuality by fearing the society. Rather, he openly manifested his homosexual relationships. He was a keen observer and his writings had a vivid and eloquent touch. This author was innovative and in his works, he introduced some new techniques of writing which were not used by any writer before. His creativity was not limited to short stories and novels, he also wrote screenplay and dialogue for films which were equally appreciated. One of his most famous works ‘In Cold Blood’ which is based on a true murder incident. Capote did extensive research before penning this novel and his hard work paid off when it turned out to be a bestseller. The non-fiction book is popular among reader till today American Celebrities
Journalists
Non-Fiction Writers
American Men
Libra Writers
Childhood & Early Life:
He was born to Archulus Persons and Lillie Mae Faulk on 30th September 1984, in New Orleans, Los Angeles. When he was four-years old, his parents separated and the young lad lived with his maternal relatives in Alabama. Later, his mother married Joe Capote and Truman went to live with his mother and step-father.
He received education from institutions such as the ‘Trinity School’, ‘St. Joseph Military Academy’ in New York. After his family shifted to Greenwich, in 1939, he joined the ‘Greenwich High School’. There this budding author began to write for the school’s literary journal as well as the school newspaper.
In 1942, the family moved back to New York City and he then, entered the ‘Franklin School’ (now the ‘Dwight School) and completed his graduation a year later. 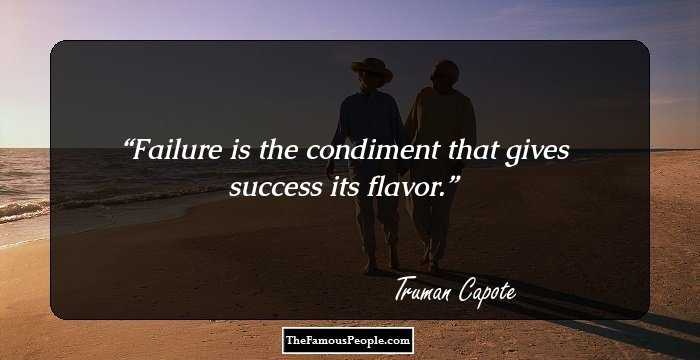 Continue Reading Below
Career:
In 1943, he was employed at ‘The New Yorker’ as a copyboy for two years. In an untoward incident the young author annoyed poet Robert Frost and was sacked from the job. Soon after, he went back to Alabama where he penned his first novel ‘Summer Crossing’.
His short story ‘Miriam’ was published in the magazine ‘Mademoiselle’ and won the ‘O. Henry Award’ the next year. During the same time, he also wrote ‘My Side of the Matter’.
In 1946, he was inducted into the artists’ colony ‘Yaddo’ which is located in the Saratoga Springs region of New York. During his stay at the colony this talented writer penned a novel and also wrote a short story ‘The Headless Hawk’ which appeared in the ‘Mademoiselle’ magazine.
His story ‘Shut a Final Door’ was published in the monthly magazine ‘The Atlantic’ in the year 1947. The same year, he wrote the novel ‘Other Voices, Other Rooms’, which was his first novel to be published.
In early 1949, he published his collection of short stories ‘A Tree of Night and Other Stories’, and the following year another short story ‘House of Flowers’ and the travelogue ‘Local Color’ were printed. ‘House of Flowers was made into a play after a few years.
The author’s work ‘The Grass Harp’ reached the readers in the year 1951 and later this was made into a play by the same name.
In 1953, he wrote the screenplay of the film ‘Beat the Devil’ along with its director John Huston. The same year, he wrote the dialogues of the film ‘Terminal Station’.
He wrote a non-fictional work entitled ‘The Muses Are Hard’ and a short story ‘A Christmas Memoir’ in the year 1956, and the following year, he wrote a piece about actor Marlon Brando titled ‘The Duke and His Domain’.
In 1958, he published his short novel ‘Breakfast at Tiffany’s: A Short Novel and Three Stories’. This was later, adapted into a film and also a Broadway musical.
Continue Reading Below
The following year, he penned his autobiographical essay ‘Brooklyn Heights: A Personal Memoir’ and also worked for the book ‘Observations’.
During 1960-61, he wrote the screenplay of the film ‘The Innocents’ which was inspired by Henry James’ work ‘The Turning of the Screw’.
In 1966, Capote’s novel ‘In Cold Blood: A True Account of a Multiple Murder and Its Consequences’ was published and this was termed as a non-fictional novel by the author. This novel won him the ‘Edgar Award’ the following year in the ‘Best Fact Crime book’ category, and this work was also adapted into many films. This was also made into a tele-series in 1966.
His short story ‘The Thanksgiving Visitor’ was published in the ‘McCall’s’ magazine in the year 1967.
In 1973, he wrote an anthology named ‘The Dogs Bark: Public People and Private Places’. Two years later, two episodes from his uncompleted novel ‘Answered Prayers’ titled ‘Mojave’ and ‘La Cote Basque, 1965’ were published in the ‘Esquire’ magazine.
His collection which comprised of some fictional and non-fictional writings named ‘Music for Chameleons’ was published in 1980.
In 1983, few months before his death his autobiographical work ‘One Christmas’ was released. 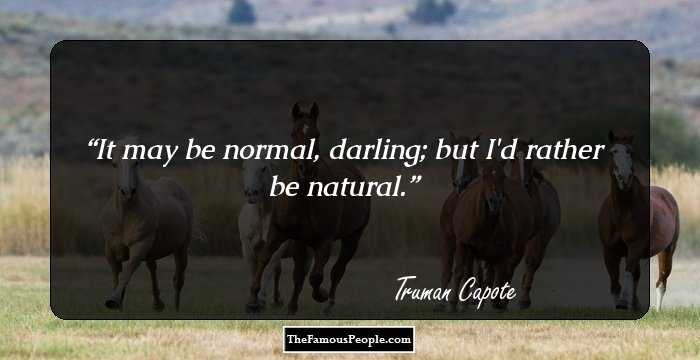 Major Works:
One of his most renowned works is his novel ‘In Cold Blood’ which was a non-fictional story according to the writer and was based on a true gory incident which claimed four lives of the same family under mysterious circumstances. His work was appreciated by both critics and readers alike became a bestseller. The author used many new techniques to give it a dramatic touch.
Awards & Achievements:
He earned the ‘O. Henry Award’ for his works ‘Miriam’, ‘Shut a Final Door’ and ‘The House of Flowers’.
He won the ‘Edgar Award’ for his work in the film ‘The Innocents’ and his novel ‘In Cold Blood’. 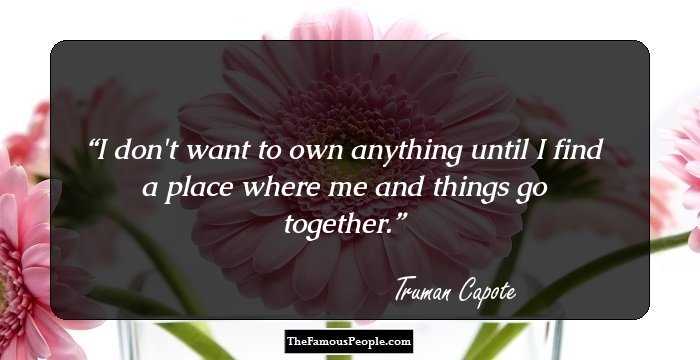 Quotes: Me, Together, I
Personal Life & Legacy:
He was a homosexual and did not hide this fact even though back in the day society had very rigid opinions on this matter. He was strongly attracted to professor Newton Arvin and even dedicated his book ‘Other Voices, Other Rooms’ to him. He shared a close relationship with writer Jack Dunphy, and the two were together till Capote died.
During his later years, he did not produce much literary work and was engaged with the media through radio and television. He was into drugs and alcohol and on 25th August 1984, he died of cancer at Los Angeles.
His first penned novel ‘Summer Crossing’ found after his death was published posthumously.
Trivia:
Capote had been a close friend of the author of ‘To Kill a Mocking Bird’ Harper Lee
Recommended Lists:
Writers #47
Media Personalities #37

Quotes By Truman Capote | Quote Of The Day | Top 100 Quotes

See the events in life of Truman Capote in Chronological Order