(Famous for Her Books 'The Bell Jar' and 'Ariel')

Sylvia Plath has been hailed as one of the most renowned and influential poets of the twentieth century.Born in the United States of America in the early 1930s, she has been credited with advancing the genre of confessional poetry. She was also equally famous for her short stories and novel. She started writing early in her life and had her first poem published at the age of eight, her first national publication at the age of eighteen, and was selected a guest editor of ‘Mademoiselle’ at twenty. However, she failed to accept rejections in a healthy way and at the age of twenty-three unsuccessfully tried to commit suicide. Nonetheless, she successfully completed her studies and went to England, where he met and married Ted Hughes. They first lived in the US, but later returned to England, where she continued to write. She had her first book of poems published at the age of twenty-eight. This was in fact, one of the only two books that were published in her life time; all others were published after her suicide at the age of thirty. epitaphs: Even amidst fierce flames the golden lotus can be planted

American Celebrities
Novelists
Non-Fiction Writers
Short Story Writers
American Women
Childhood & Early Life
Sylvia Plath was born on October 27, 1932, in Boston, Massachusetts. Her father, Otto Emil Plath, was a professor of biologyat the Boston University. Originally from Germany, he worked extensively on bees and became famous for his 1934 book, ‘Bumblebees and Their Ways.’
Her mother, Aurelia Frances Plath (née Schober),was a student of Otto Plath at the Boston University. It is believed that she rewrote her husband’s technical text, making ‘Bumblebees and Their Ways’ suitable for general readers.Sylvia was the eldest of her parents’ two children.
In 1936, the family left Boston for Winthrop. Here on November 5, 1940, just a few weeks after Sylvia’s eighth birthday, Otto Plath died from complications arising out of diabetes. Sylvia found the death a kind of betrayal by her father.
Shocked by her father’s death, she stopped believing in God. In order to cope with her grief, she found solace in writing. In 1941, shortly after her father’s death, she had her first poem published in the children’s section of ‘Boston Herald.’
In 1942, the family shifted to Wellesley, Massachusetts. Here Aurelia began teaching at Boston University while Sylvia was admitted to Bradford Senior High School (now Wellesley High School) in the fifth grade.
When she turned eleven she began writing journals, a habit she maintained throughout her life. Side by side, she continued writing poems, many of which were published in local papers and magazines.
Her first article to be published in a national paper was ‘Youth’s Appeal for World Peace’; it came out in the 16 March 1950 edition of ‘Christian Science Monitor.’From that time, her work began to appear regularly in various national papers.
After graduating from school in 1950, she entered Smith College (Northampton) on scholarship where she majored in English. She was an exceptionally bright student and soon became the editor of ‘The Smith Review.’ 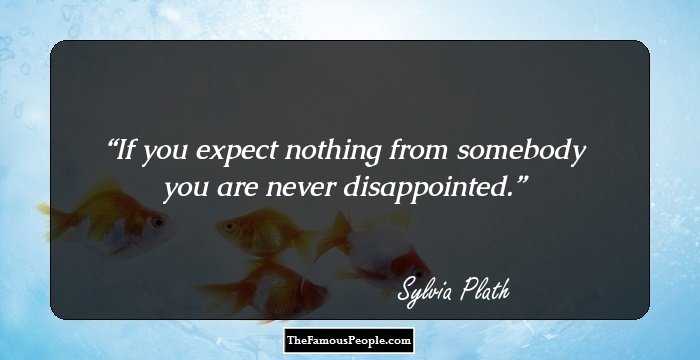 Quotes: You, Never
Continue Reading Below
College Years
In 1952, Sylvia Plath won Mademoiselle’s college fiction contest for her story, ‘Sunday at the Mintons.’ Later in 1953, she was selected a guest editor of the magazine and spent the month of June working in New York.
During this period, she missed a chance of meeting the Welsh poet Dylan Thomas who she greatly admired. Sometime now she also learned that she had been refused admission to a writers’ seminar at Harvard summer school. These incidents depressed her so much that she started behaving abnormally.
Subsequently, she returned to Wellesley and slowly her depression became so acute that she could not concentrate on her studies. Her mother took her to a psychiatrist who prescribed electric shocks, but the situation did not improve.
In spite of the fact that Mademoiselle's August issue featured several of her articles, including her poem ‘Mad Girl's Love Song’, she began to feel that she had failed.On August 24, 1953, she made her first suicide attempt.
She waited till everybody went out of the house, then she broke the lock of the medicine box and took out the sleeping pills and left a note saying she had gone out for a long walk. She then entered a crawl space and consumed forty sleeping pills.
Fortunately, she was discovered alive in time.She spent the next six months in psychiatric care, which was sponsored by the American novelist and poet Olive Higgins Prouty. By April 1954, she had recovered enough to resume writing. Sometime now she also went back to college.
Sylvia Plath submitted her thesis, ‘The Magic Mirror: A Study of the Double in Two of Dostoyevsky's Novels’ in January 1955 and graduated from Smith with highest honors in June 1955. Thereafter, she went to England to study at Newnham College under Cambridge University on a Fulbright scholarship.
While there, Plath continued writing poems, publishing them in the student newspaper ‘Varsity.’ In 1956, she married Ted Hughes, then a budding English poet; but kept it a secret until the end of her course. 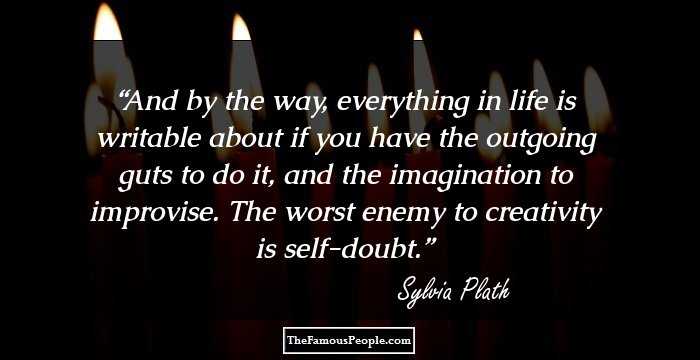 Quotes: You, Life
Continue Reading Below
Career
In June 1957, Plath returned to the USA, along with Hughes. In July, she began to work on a novel that she had started in Cambridge, but was soon frustrated at the slow pace of its progress. In September, she joined Smith College as a faculty member.
Unfortunately, the job left her with little time and energy for writing. This too added to her frustration and she lost the desire to write. In contrast, Ted became more successful in writing and publishing. Slowly, she began to wonder why she failed to achieve her goal but did not give up making efforts.
In the middle of 1958, the couple moved to Boston. Here she began working as a part time receptionist at the same psychiatric ward of Massachusetts General Hospital where she had been treated after her suicide attempt.
Around this time, her poems ‘Mussel Hunter at Rock Harbor’ and ‘Nocturne’ were accepted by the prestigious and well-paying magazine,‘The New Yorker.’ While this elated her, she found it difficult to write and this pushed her to depression once more.
From early 1959, Plath decided to write in a more inward style, trying to portray her own thoughts. Sometime now, she also enrolled at the writing class conducted by Robert Lowell. Eventually she began to have her works printed in ‘Harper's, ‘The Spectator’ and the ‘Times Literary Supplement.’
In June 1959, Sylvia Plath and her husbandleft for a trip across America and Canada, visiting several places, ultimately settling at the Yaddo artist colony in Saratoga Springs, New York State, in September.But Plath was pregnant with their first child at that time and so they left for England in December.
In February 1960, Plath signed a contract withthe British publisher Heinemann for the publication of her first book of poems: ‘The Colossus and Other Poems.’ It was published in October and received good, but limited review.Soon after that, Plath began writing her semi-autobiographical novel, ‘The Bell Jar.’
In February 1961, Plath's second pregnancy ended in miscarriage. She was highly disappointed and this was reflected in many of her poems, including ‘Parliament Hill Fields.’ In August 1961, she finished writing ‘The Bell Jar.’
In January 1962, she gave birth to her second child, and in July she found that Hughes was having an affair with another woman. This upset her deeply and in a fit of desperation, she burnt the only manuscript of her second novel, a sequel to ‘The Bell Jar.’
Continue Reading Below
She separated from Hughes in September 1962. From the beginning of October, she began writing once more, trying to negate the pain of her separation with writing. From October 11 to November 4, she produced twenty-five poems, which were later hailed as the best in her career.
Sometime now, Hughes came back to pack up his things and before he left, he told her how he hated living with her. Though hurt, she kept on writing vigorously and from November, she began to arrange them in manuscript form. It would later be published as ‘Ariel’; but she would not live to see that.
In January 1963, her only novel ‘The Bell Jar’ was published under the pseudonym of 'Victoria Lucas.' Soon after that, she began working on another novel, ‘Double Exposure’; but her last work never saw the light of the day and its manuscript went missing sometime in 1970.
Major Works
Sylvia Plath is best remembered for ‘Ariel’, a book of poems published posthumously in 1965. The poems, written during the last phase of her life, shook her readers and earned her the fame she had been yearning for all her life. Today many critics describe it as the beginning of a new movement. 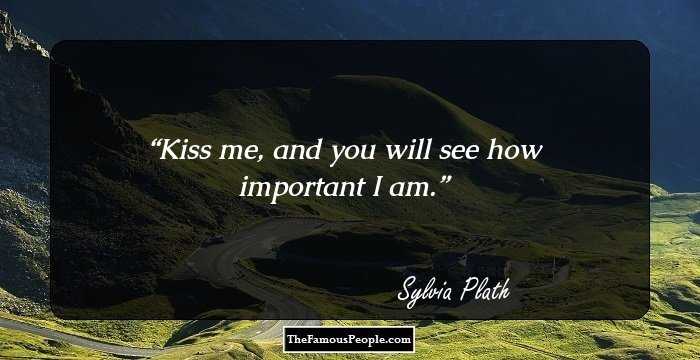 Quotes: You, Me, Will, I
Awards & Achievements
In1982, Sylvia Plath was posthumously awardedthe Pulitzer Prize forher book ‘The Collected Poems.’The poems were collected by Ted Hughes and published in 1981.
Personal Life & Legacy
On June 16, 1956, Sylvia Plath married Ted Hughes. The couple had two children;Frieda and Nicholas. While Friedagrew up to be a poet and a painter,Nicholas became an expert in stream salmonid ecology.
In September 1962 Hughes left her for another woman and Plath became very depressed. By January 1963, the weather became horribly cold, and confined at home with no telephone, her depression increased to an alarming level. Although she had been consulting psychiatrists, the situation did not improve.
In the early morning of February 11, 1963, Plath put some bread and milk in the children's room and then sealed their door off with tape. She then locked herself in the kitchen and placed her head in the oven with the gas turned on, thus committing suicide. Her body was discovered later that day.
In 2012, The United States Postal Service introduced a postage stamp featuring Sylvia Plath.
Trivia
Her death gave rise to a new term in psychiatry called ‘The Sylvia Plath effect’; it was coined in 2001 by psychologist James C. Kaufman and refers to the phenomenon which makes poets more susceptible to mental illness than other creative writers.
Recommended Lists:
Non-Fiction Writers #4
Writers #19

Quotes By Sylvia Plath | Quote Of The Day | Top 100 Quotes

See the events in life of Sylvia Plath in Chronological Order