James Baldwin was an American writer and social critic, best known for his debut novel, ‘Go Tell It on the Mountain’. A highly insightful writer, he explored themes like race, sexuality, spirituality, and humanity in his works. Born in Harlem, New York, U.S. as the eldest son of his mother, he never knew the identity of his biological father. His mother married again and even though his step-father adopted him, he never treated the young boy with love and care. Abused by his step-father and growing up in poverty, he spent much of his early years caring for his numerous younger siblings. His future looked bleak when he happened to meet the renowned artist Beauford Delaney who became his mentor and encouraged him to express himself creatively. Baldwin who already had an interest in writing started taking his passion seriously and soon wrote several short stories, essays, and book reviews. He had realized during his teenage that he was gay, and being a homosexual in mid-20th century America was very difficult and he was often subjected to discrimination and abuse. Disillusioned with his homeland, he moved to France and established himself as not just an influential African-American writer but also as an influential exile writer American Celebrities
Essayists
Activists
Black Writers
Black Essayists
Childhood & Early Life
James Baldwin was born on August 2, 1924, Harlem, New York, U.S. to Emma Berdis Jones. His mother divorced her abusive husband shortly after James was born. A few years later she married a preacher David Baldwin who adopted James. Emma and David had several more children and the family lived in poverty.
James Baldwin had strained relations with his step-father who treated him very harshly.
James loved reading and writing from a young age. He went to Frederick Douglass Junior High before moving on to DeWitt Clinton High School. As a black boy, he was often subjected to racial remarks.
He graduated from high school in 1942. Quotes: Love, Think
Continue Reading Below
You May Like

The Hottest Male Celebrities With The Best Abs
Career
After his graduations, James Baldwin started doing odd jobs in order to help support his large family which consisted of several younger siblings. Even as he struggled to make ends meet, he wrote short stories, essays, and book reviews whenever he could find leisure time.
In 1953, he published his debut novel, ‘Go Tell It on the Mountain’. It was semi-autobiographical and examined the role of the Christian Church in the lives of African-Americans. He made numerous references to the Bible in this book.
In his 1956 novel ‘Giovanni's Room’, he explored the concepts of homosexuality and bisexuality, drawing from his own experiences as a gay man living in the mid-20th century America.
James Baldwin was also a playwright and wrote the play, ‘Blues for Mister Charlie’, a tragedy in three acts. Loosely based on a real-life incident, the Emmett Till murder, the play was first produced in 1964.
His novel ‘Tell Me How Long the Train's Been Gone’, first published in 1968 revolves around the lives of a black man and his white partner, and explores the issues of racism, bisexuality, white privilege, and Fundamentalist Christianity, like many of his other literary works.
In 1972, he published a non-fiction book, ‘No Name in the Street’. He described several historical events and figures from his own perspective in the book. Some of the figures he covered were Martin Luther King, Bobby Seale, Malcolm X, and Huey Newton.
Baldwin was famous for writing book-length essays and his ‘The Devil Finds Work’ (1976) was one of them. In this work, he discussed several movies and gave a critique of the racial politics of American cinema. The movies discussed include ‘Guess Who's Coming to Dinner’, ‘In the Heat of the Night’ and ‘The Defiant Ones’.
He was a prolific writer and continued publishing till the end of his life. However, his later works could not achieve the widespread popularity and success of his earlier works. 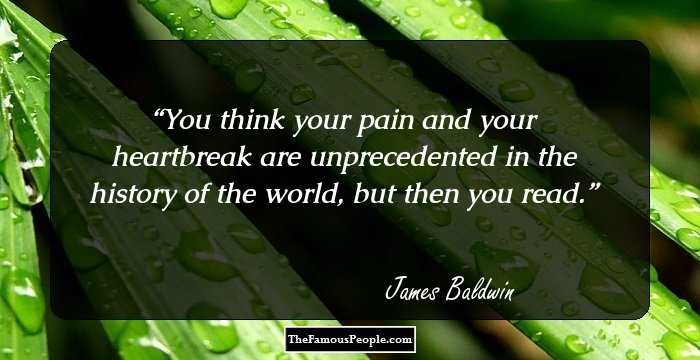 Quotes: You, Think, History
Continue Reading Below
Major Work
His debut novel, ‘Go Tell It on the Mountain’, is probably his best known work. Time Magazine included the novel in its TIME 100 Best English-language Novels from 1923 to 2005.
Awards & Achievements
He was honored with the George Polk Award.
James Baldwin was the recipient of the Eugene F. Saxon Memorial Award which he secured with the help of the writer Richard Wright.
In 2002, scholar Molefi Kete Asante included James Baldwin on his list of 100 Greatest African Americans. 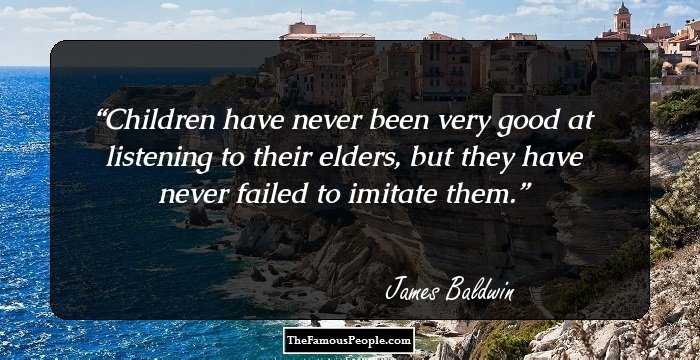 Quotes: Never, Children
Personal Life & Legacy
James Baldwin realized that he was gay when he was in his teens. Being black and gay, he was often targeted and abused. Disillusioned with the state of the society in the US he moved to France where he spent the most of his later life.
He was a popular person and had many close friends including actor Marlon Brando, civil rights activist Nina Simone, author and singer Maya Angelou, and Nobel Prize-winning novelist Toni Morrison.
He suffered from esophageal cancer and died on December 1, 1987.
Trivia
He was active in the Civil Rights Movement in the US and made a prominent appearance at the Civil Rights March on Washington, D.C. on August 28, 1963. However, the civil rights movement was hostile to homosexuals and he was one of the few gay men in the movement.
Recommended Lists:
Essayists #2
Writers #25
Activists #32
You May Like

Quotes By James Baldwin | Quote Of The Day | Top 100 Quotes

See the events in life of James Baldwin in Chronological Order