A man who experienced a spiritual conversion aboard a ship, John Newton co-authored one of the greatest hymns of faith, ‘Amazing Grace', which had an impeccable influence on English hymnology. He was a skillful preacher and dedicated theologian and played a crucial and significant role in the evangelical movement. He supported his dear friend, William Wilberforce, who campaigned against slavery and thus served as an abolitionist. Even though he himself was involved in slave trade for a certain period in his lifetime and captained many slave ships, he later became an abolitionist of slavery. He began his career in the sea at a very young age and was abused and tortured as a slave for some time in his life, after which he was rescued. He was also the author of the hymn, 'Glorious Things of Thee are Spoken'. His legacy continues to live as he is portrayed in many works of art, like films, novels and plays. Francis Drake
24th July In History
DID WE MISS SOMEONE?
CLICK HERE AND TELL US
WE'LL MAKE SURE
THEY'RE HERE A.S.A.P
Quick Facts

British People
Philanthropists
Priests
Sailors
British Men
Childhood & Early Life
John Newton was born in Wapping, London to John Newton Sr, a shipmaster and Elizabeth, an instrument maker. He lost his mother to tuberculosis at the age of six.
He later relocated to Aveley, where he lived with his father and his new wife. He was then sent to a boarding school. By the time he turned eleven, he went to the sea with his father.
Before his father retired in 1742, he had already been on six voyages with him. Even though his father wanted him to work in sugar plantation, he opted to sail with a merchant ship. 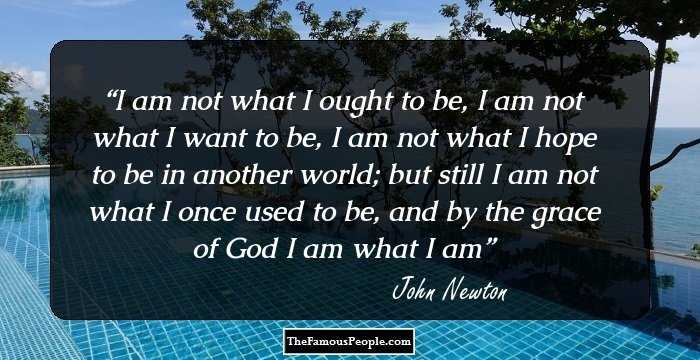 Quotes: God, Hope, I
Continue Reading Below
You May Like

The Hottest Male Celebrities With The Best Abs
Career
In 1743, he was captured, while he was visiting a set of his friends, and was forced to become a part of the naval services by the Royal Navy. He was appointed as a midshipman aboard ‘HMS Harwich’.
During his service with the Royal Navy, he unsuccessfully tried to escape and was punished in front of a crew of 350 members for the same. He was stripped to waist and was demoted as a seaman.
Humiliated by the punishment, he wished to kill the captain for the disgrace he faced. He even had suicidal thoughts and longed to jump into the sea and end his life. However, before either of the extremes was acted upon, he recovered from the humiliation.
When ‘HMS Harwich’ was en-routed to India, he was shifted to the slave ship, ‘Pegasus’, which was going to South Africa. The ship carried goods and slaves to be sold in England and other countries.
Since he created a lot of problems for the crew aboard ‘Pegasus’, he was left in South Africa with a slave dealer named, Amos Clowe, who gave him to his wife, Princess Peye, an African duchess.
He was tortured and abused along with other slaves of Princess Peye. Upon the request of his father, a sea captain rescued him in 1748. He boarded the 'Greyhound', a merchant ship that carried beeswax and dyer's wood to return to England. It was during this journey that he experienced a spiritual conversion to evangelical Christianity.
During his journey aboard the 'Greyhound', he spent his time reading religious literature including the Bible. When he reached Britain, he fully accepted the doctrines of evangelical Christianity.
In 1750, after returning to England, he took on the position of a captain for the slave-trading ships, 'Duke of Argyle' and 'African'. After four years, he discontinued his nautical and active slave-trading activities.
In 1755, he was appointed as the tax collector of the Port of Liverpool, a position that he earned through the recommendation of Manesty. By this time he was well known as an evangelical lay minister.
Continue Reading Below
In 1757, he applied to the Church of England to be ordained a priest. This was not accepted initially - a fact which caused constant frustration to him.
After seven years, in 1764, he became acquainted with Lord Dartmouth, who recommended him to the Bishop of Chester, after which he was made a priest in Olney, Buckinghamshire, in June that year.
In 1779, he became the Rector of St Mary Woolnoth, Lombard Street, London. That year, he also came out with his autobiography, 'The Force Of Truth'.
In 1788, he published the pamphlet, ‘Thoughts Upon the Slave Trade', in which he elaborated on the severe and harsh conditions in which slaves were taken in ships.
He supported William Wilberforce, who led a campaign to abolish slavery. This was enacted in the Parliament as the Slave Trade Act 1807, which he lived to see.
In 1779, along with William Cowper, he worked on writing a series of hymns. These efforts were made into a book named, 'Olney Hymns', which was published the same year. 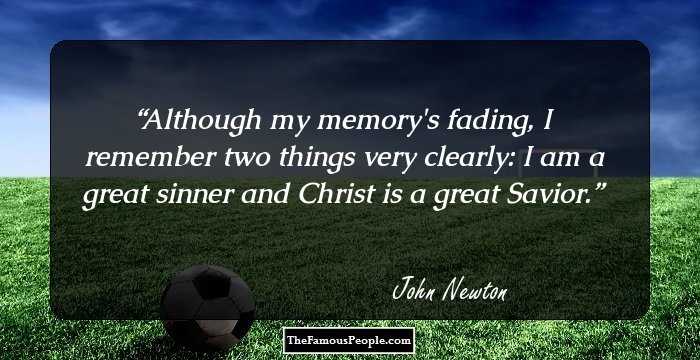 Quotes: I
Awards & Achievements
In 1792, he received the degree of Doctor of Divinity, conferred by the College of New Jersey.
Personal Life & Legacy
In 1750, he married his long-time love and childhood sweetheart, Mary Catlett. The wedding ceremony was organised at the St. Margaret's Church, Rochester.
Continue Reading Below
He adopted two of his orphaned nieces. They were, Elizabeth and Eliza Catlett.
He authored an anonymous autobiography titled, 'An Authentic Narrative of Some Remarkable And Interesting Particulars in the Life of ------ Communicated, in a Series of Letters, to the Reverend T. Haweiss'.
After the death of his wife, he published the book, ‘Letters to a Wife’, which was published in 1793.
He suffered from poor health and eye problems towards the last days of his life, and breathed his last in 1807 in London. He was laid to rest along with his wife at the St. Mary Woolnoth.
In 1982, he was inducted into the Gospel Music Hall of Fame.
In 1975, his character was portrayed by actor John Castle in 'The Fight Against Slavery', a British television miniseries.
In the 2006 film, ‘Amazing Grace' his character was portrayed by actor Albert Finney.
In 2007, Murray Watts directed the play, 'African Snow'. The play is shown as if it took place in Newton’s mind. 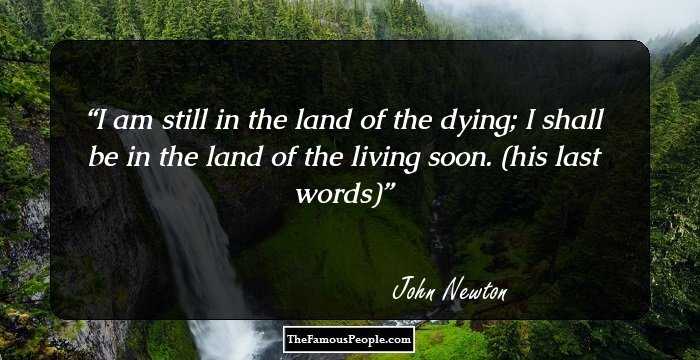 Quotes: Living, I
Trivia
He authored numerous famous hymns, including ‘Amazing Grace’ and ‘Glorious Things of Thee are Spoken’.
You May Like

Quotes By John Newton | Quote Of The Day | Top 100 Quotes

See the events in life of John Newton in Chronological Order