Blaise Pascal was a French mathematician and physicist who laid the foundation for the modern theory of probabilities. A multi-faceted personality, he was also a Christian philosopher, inventor, and writer. Born as the son of a talented mathematician, he received his primary education from his father, who through his unorthodox curriculum, wanted to ensure that his bright young son grew up in an intellectually stimulating environment. The boy started displaying signs of brilliance at an early age and was regarded as a child prodigy. He was just 16 when he wrote a significant treatise on the subject of projective geometry and started working on other serious mathematical concepts as well. While still in his teens he began building calculating machines which later became known as Pascal’s calculators. The calculators, which he had developed with the aim of helping his father in calculating taxes, became Pascal’s first claim to fame. Over the next several years he researched and wrote extensively on mathematical theories and also experimented in physical sciences. Throughout his life he made numerous great contributions to the philosophy of mathematics and the physical sciences. As a Christian philosopher, his most influential theological work is considered to be the ‘Pensées’ which unfortunately he could not complete before illness claimed him at the relatively young age of 39. Jacques Lacan
DID WE MISS SOMEONE?
CLICK HERE AND TELL US
WE'LL MAKE SURE
THEY'RE HERE A.S.A.P
Quick Facts

French People
Physicists
Philosophers
Mathematicians
French Men
Childhood & Early Life
Blaise Pascal was born in Clermont-Ferrand, in France's Auvergne region on 19 June 1623 to Antoinette Begon and Étienne Pascal. He had two sisters. His father was a tax collector and a talented mathematician.
His mother died when he was just three years old. His father never remarried and appointed a maid to take care of the children. Étienne was completely devoted to his children and educated them himself and encouraged their intellectual pursuits.
Blaise proved to be a child prodigy who developed a deep interest in mathematics and science as a young boy. Impressed by the boy’s fascination with mathematical concepts, his father took him to meetings at the mathematics academy in Paris.
At the age of 16, Blaise Pascal presented some of his early theorems including his "mystical hexagon” to the audience which included great mathematical thinkers of the time like Marin Mersenne, Pierre Gassendi and Clyde Mydorge.
In 1642, he started working on a mechanical calculator that could perform additions and subtractions after watching his father perform exhausting calculations and recalculations of taxes owed and paid. The device was called Pascal's calculator or the Pascaline. 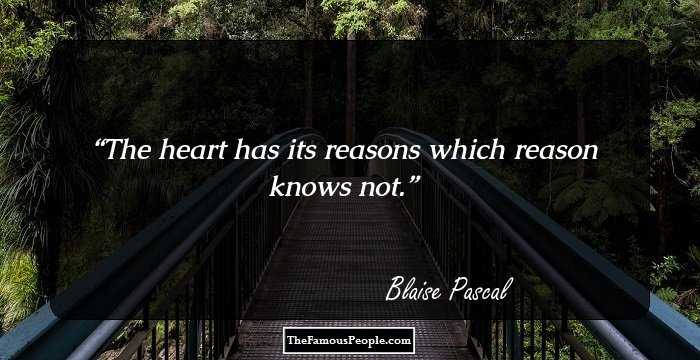 Quotes: Heart
Continue Reading Below
Later Years
He continued working on improving the Pascalines as there was a discrepancy between the calculator's design and the structure of the French currency of the time. He had made many improvements to the original design by 1645 yet the Pascalines were not commercially successful due to their high cost.
During the 1640s, he learned of Evangelista Torricelli's experimentation with barometers. Following in his footsteps, Pascal experimented with how atmospheric pressure could be estimated in terms of weight. Through his own experimentation, he validated Torricelli's theory concerning the cause of barometrical variations and paved the way for further studies in hydrodynamics and hydrostatics.
During the same time period, he invented the syringe and created the hydraulic press, an instrument based upon the principle that became known as Pascal’s law which stated that pressure applied to a confined liquid is transmitted undiminished through the liquid in all directions regardless of the area to which the pressure is applied.
He made significant contributions to mathematics and published his ‘Traité du triangle arithmétique’ ("Treatise on the Arithmetical Triangle") in 1653. The treatise described a convenient tabular presentation for binomial coefficients, now called Pascal's triangle.
in 1654, he corresponded with the eminent mathematician Pierre de Fermat on the subject of gambling problems. Their collaboration led to the development of the mathematical theory of probabilities, and the notion of expected value was born out of their interaction. The important groundwork laid by these two great mathematicians proved to be instrumental in Leibniz' formulation of the calculus.
Pascal had an intense religious experience in 1654 after which he mostly gave up work in mathematics. Following this, he focused on writing on religious matters and published an 18-letter series between 1656 and 1657 under the pseudonym Louis de Montalte. In these letters he attacked casuistry, a popular ethical method used by Catholic thinkers in the early modern period, and this greatly angered King Louis XIV who ordered that the work be shredded and burnt in 1660.
Blaise Pascal was of delicate health and suffered from several ailments during the later years of his life. He was working on an apology on Christianity which he could not complete before his untimely death at the age of 39. The fragments of his work were later collected and published posthumously as ‘The Pensées’ which is today considered a masterpiece. 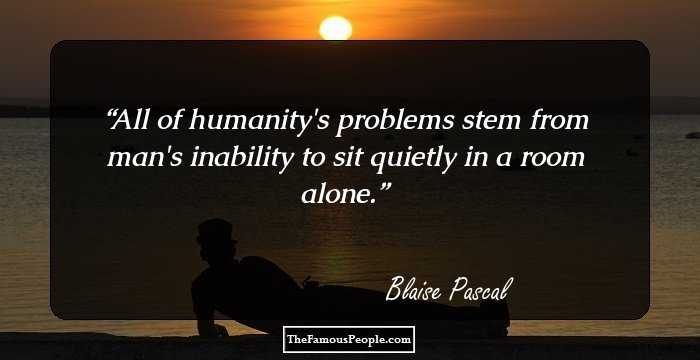 Quotes: Alone
Major Works
In mathematics, his most significant contribution was the development of probability theory. Developed in collaboration with Pierre de Fermat, the theory was initially applied to gambling before finding application in several other fields as well. Today, it is extremely important in the area of actuarial science among others.
He established what later became known as Pascal’s law or the principle of transmission of fluid-pressure. The law states that that pressure exerted anywhere in a confined incompressible fluid is transmitted equally in all directions throughout the fluid such that the pressure variations (initial differences) remain the same.
He invented mechanical calculator known as Pascal’s calculators or Pascalines. It was primarily an adding machine which could add and subtract two numbers directly although it the device was capable to do multiply and divide by repetition."
Personal Life & Legacy
Having lost his mother at a young age, Blaise Pascal developed very close bonds with his father and two sisters. He lost his beloved father in 1651 and sister Jacqueline in 1661.
He was of delicate health and suffered from numerous health problems during his later years. He was almost always in pain throughout his adult life, and his health took a turn for the worse in 1662. He died on 19 August 1662, aged just 39. The cause of his death was probably tuberculosis, stomach cancer, or a combination of the two.
In the 1970s, the Pascal (Pa) unit, a SI unit of pressure, was named after Blaise Pascal in the honor of his contributions to science. The programming language, Pascal, is also named after him. 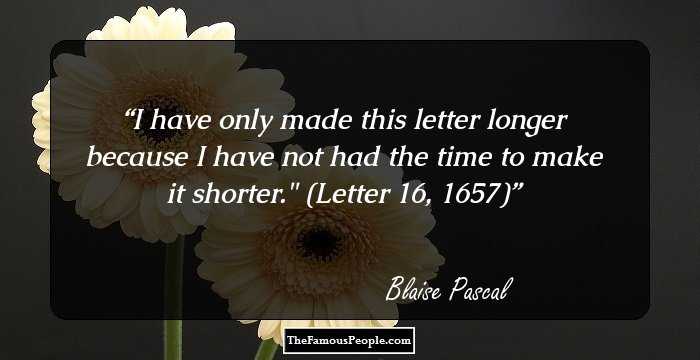 Quotes By Blaise Pascal | Quote Of The Day | Top 100 Quotes

See the events in life of Blaise Pascal in Chronological Order