Anna Julia Cooper was an American educator, writer, and scholar remembered for her pioneering crusade for the upliftment of African-American women. Born as a slave, she was a bright and gifted child. After completing her early schooling, she became a teacher but was later forced to leave her job after marriage. It was quite an unfortunate situation because her husband died two years later after which she returned to pursue further studies. She had a long and distinguished career as a teacher and also received recognition as an author. Her first book, ‘A Voice from the South: By a Woman from the South’, received wide critical acclaim and raised awareness against slavery and racism targeted at black women. Later, she completed her doctoral studies and became only the fourth African-American woman to earn the Ph.D. degree in any field. She continued to be a strong advocate for women's education and for racial and gender equality for the rest of her life. She lived an eventful life that led her from the darkness of slavery to the dawn of the civil rights movement. As a teacher and thinker she encouraged advancement of women through education and social progress, influencing the lives of countless people in the process. American Celebrities
Black Activists
Black Miscellaneous
Non-Fiction Writers
Civil Rights Activists
Childhood & Early Life
She was born on August 10, 1858 in Raleigh, North Carolina, USA to Hannah Stanley Haywood, a slave in the home of George Washington Haywood, a landowner. George is believed to be the father of all the seven daughters of Stanley, including Anna.
In 1868, at the age of ten, she earned a scholarship to a new school, the St. Augustine’s Normal School and Collegiate Institute, founded to educate and train teachers for newly liberated slaves. 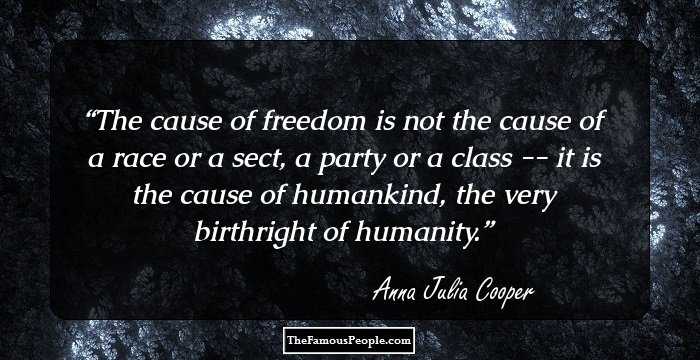 Black Non-Fiction Writers
Women's Rights Activists
Black Civil Rights Activists
American Female
Later Years
In 1881, she left St. Augustine's and began her undergraduate studies at Oberlin College on a tuition scholarship, having already achieved distinction in both liberal arts and mathematics. In 1884, she completed her BA and became one of the first African American women to do so.
After graduation, she taught for a short period at Wilberforce University in Ohio, and then for one year at her alma mater, St. Augustine. Then she attended the Oberlin College and earned a Master of Science degree in mathematics in 1887.
In 1887, she received an offer to become a faculty member at what was then called the Washington Colored High School (later known as the M Street School). During this period in Washington, she began writing and publishing the work that would earn her scholarly distinction and renown.
In 1892, she published her best known book ‘A Voice from the South: By A Woman from the South’ which is considered to be one of the first articulations of Black feminism. It was her only published work, although she delivered many speeches calling for civil rights and woman's rights.
In 1902, she was appointed the principal of the school. She felt strongly that all students, regardless of race or gender should be provided proper college education and not just vocational training. But she was asked to discontinue her non-vocational approach to which she refused, and was thus forced to resign as principal.
Then she took a job teaching language at the Lincoln Institute in Jefferson, Missouri, where she stayed for four years. During that time, she also fought her dismissal from M Street, and finally, in 1910, she was recalled to the M Street School.
In 1914, she began doctoral work at Columbia University, but later transferred her credits and continued her studies at the University of Paris in France.
In 1925, she completed her dissertation, ‘The Attitude of France toward Slavery in the Revolution’, and became the fourth African-American woman to earn a PhD.
When she retired from M Street School in 1930 at the age of 72, she became president of Frelinghuysen University, an institution offering education for older, employed African-Americans.
She was not only an author and educator, but also a social commentator. She participated in several conferences including the World's Congress of Representative Women at the Chicago World's Fair in 1893, the Woman Suffrage Congress in 1893, and the Pan-African Conference in London in 1900, and delivered notable speeches on racial and gender equality and education.
She became the first and only woman to be elected to the American Negro Academy. She was also one of the founders of the Colored Women’s YWCA and the Colored YMCA.
Recommended Lists:

Oberlin College
Columbia University
Leo Writers
Female Writers
Major Works
In 1892, her best known work, ‘A Voice from the South: by a Black Woman of the South’, was published. A collection of essays emphasizing the nature and role of African American women, the book is widely considered to be the first black feminist tract.
Recommended Lists:

Female Activists
American Writers
American Activists
American Female Writers
Personal Life & Legacy
In 1877, while teaching at the school, she married an older teacher, George C. Cooper, and left her job because of the social obligations of the time. Unfortunately her husband died after two years. Later she returned to teaching and spent the rest of her life as a widow.
She died of a heart attack on February 27, 1964, in Washington, D.C., at the age of 105. She was buried next to her husband at the City Cemetery in Raleigh.
Recommended Lists: