Advanced Search
Ralph Nader is an American consumer attorney, author and political activist. He has run for the post of the President several times. He came into limelight in the year 1965, when his book on the safety record of the first generation Chevrolet Corvair and other American vehicle companies, was published. This book, ‘Unsafe at any Speed’ is rated to be among the top 100 pieces of journalism of the last century. He is the founder of ‘Public Citizen’, ‘Clean Water Action Project’ and other consumer advocacy groups which continue to be the rivals of uncontrolled corporate power. Nader entered the Presidential race five times in the 1990s and 2000s. He had a significant run as part of the Green Party in 1996 and 2000. He was an independent candidate for the seat in 2004 and 2008. Ralph Nader is well-known for his active participation in areas like environmentalism, democratic government and humanitarianism. His contribution in the field of consumer protection is highly acknowledged. In fact, Ralph Nader is sometimes called ‘ The father of consumer protection’ because of his contribution to the law and public policies in sectors like automobiles, meat packing, mining and insurance. American People
Educators
Political Activists
American Men
Harvard University
Childhood & Early Life
Ralph Nader was born on February 27, 1934, in Winstead, Connecticut. His father Nathra Nader owned a bakery and restaurant. His mother was Rose Nader. They were an immigrant family from Lebanon.
The youngest of five children, Nader’s interest in politics grew after his visits to the town hall meetings.
In 1951, Nader graduated from the Gilbert School and enrolled at Princeton University.
In 1955, he received his Bachelor of Arts degree from Woodrow Wilson School of Public and International Affairs.
In 1958, he graduated with a Bachelor of Laws degree from Harvard Law School. It was here that Nader became interested in the subject of auto safety and published a thesis on it. 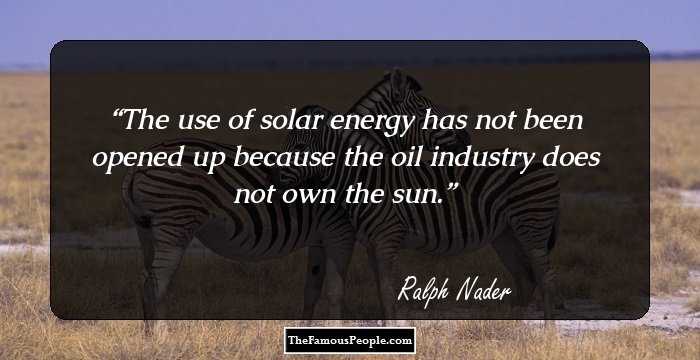 Continue Reading Below
Career
Nader followed his law degree with six months worth active service in the US army.
In 1959, he returned back from army service and started practicing as a lawyer in Hartford, Connecticut. From 191-1963, he worked as an assistant professor at the University of Hartford.
In 1964, Nader was appointed a consultant at the Labor department as an aide to Daniel Patrick Moynihan.
In May 1965, he left the department and completely devoted himself to finishing his book ‘Unsafe at any Speed’ which particularly exposed over 100 lawsuits that were filed against the Chevrolet division of ‘General Motors’.
Naturally, Nader became a target for automobile companies and his private life began to be investigated by spies working for GM. He was forced to sue the company for intrusion of privacy. These events helped in passing of the National Traffic and Motor Vehicle Safety Act in 1966.
A number of young activists were inspired by Nader’s works and they started helping him by collecting data on baby food, radiation dangers, pension reforms and other social issues. They called themselves ‘Nader’s Raiders’.
In 1969, Nader founded Center for the Study of Responsive Law that researches and publishes reports on several consumer issues.
During the 1980s and 1990s, Nader worked on the savings-and-loan bailout problems, along with other environmental threats like ozone layer depletion. He was active in limiting the civil lawsuit damages incurred by consumers.
Ralph Nader entered the presidential race as a write-in candidate in the year 1992. In 1996, he was nominated by the Green Party. He garnered 685,297 votes or 0.71% of the popular vote that year.
Continue Reading Below
He again accepted the presidential nomination of the Green Party, in June 2000. Nader and Winona LaDike received 2,883,105 votes or 2.74 percent of the popular vote, thus qualifying the Green Party for ballot status in many states.
He was criticized by the Democrat party for acting as a ‘spoiler’ by taking away votes from the Democrat runner Al Gore who lost the state of Florida by 537 votes.
He was consistent with the ‘Green Party’s stand on issues like opposing the war in Iraq, when he appeared in the 2004 presidential campaign as an independent candidate. He received 463,655 votes, or 0.38 percent of the popular votes.
He received 738,475 votes, or 0.56 percent of the popular vote on his 2008 campaign, again as an independent candidate. 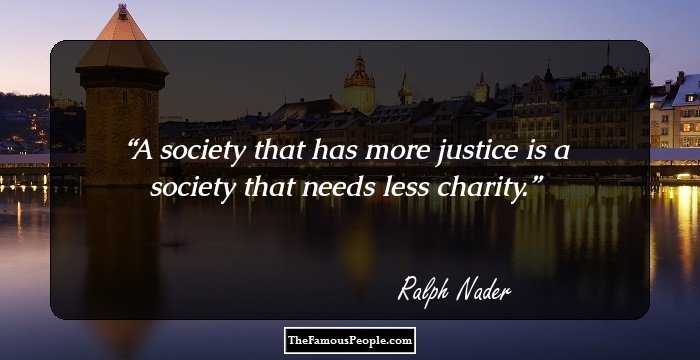 Major Works
Ralph Nader’s most important work is ‘Unsafe at any Speed’, published in 1965, wherein he pleaded for central car-safety standards.
Apart from this, he wrote and edited numerous books. ‘Crashing the Party’ is a documented account of his 2000 presidential election. Other books are ‘Corporate Power in America’(1973), ‘The menace of Atomic Energy’ (1977), ‘The Big boys’(1986), ‘Collision course’(1994), ‘No contest’ (1996).
Awards & Achievements
For his activism, Nader received the S. Roger Horchow Award for Greatest Public Service by a Private Citizen in 1974. He was also named one out of the 10 Outstanding Young Men of the Year by the United States Junior Chamber of Commerce in the year 1967.
Nader has been instrumental in the passing of acts like the Clean Air Act, Clean Water Act, Consumer Product Safety Act, Nuclear Power Safety and Wholesome Meat Act.
He had either founded or helped to start organizations like Center for Auto Safety, Center for Women Policy Studies, Critical Mass Energy Project, Princeton Project 55 and many more. 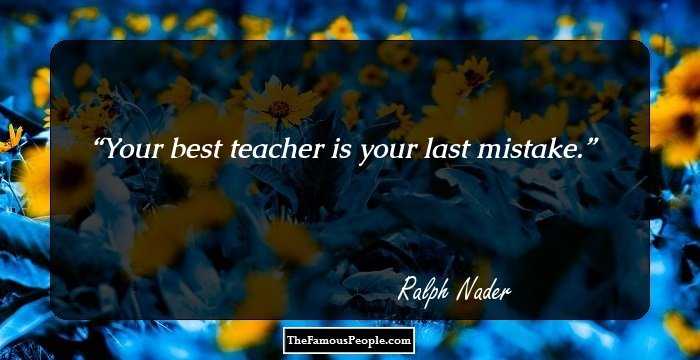 Personal Life & Legacy
Ralph Nader remains unmarried to this day, a decision, perhaps fuelled by the importance he gives to his career.
He has been living in Washington, DC for the last 50 years.
Recommended Lists:
Miscellaneous #271
Activists #98

Quotes By Ralph Nader | Quote Of The Day | Top 100 Quotes

See the events in life of Ralph Nader in Chronological Order