Harriet Tubman was an American political activist and abolitionist.Born into slavery, Harriet escapedcaptivity and conducted 13 rescue missions to free approximately 70 enslaved people. Helping other enslaved blacks escape their miserable fate and lead a life of dignity became her life’s mission. She had a very tough childhood as she was born to parents who were bonded slaves. As a young girl, she was made to do back-breaking work.She was also subjected to physical assault; once, she was hit on her head so hard that she suffered from seizures, narcoleptic attacks, and severe headaches throughout her life. But she was never disheartened by her problems and strived towards helping other people, including family and friends, escape slavery. She also worked as a cook, nurse, and spy for the Union Army during the ‘American Civil War’ and became the first woman to lead an armed expedition in the war when she led several hundreds of slaves in the ‘Combahee River Raid.’ She played an active role in the women’s suffrage movement in New York and spent her later years tending to her family and other people in need. Rosario Dawson
DID WE MISS SOMEONE?
CLICK HERE AND TELL US
WE'LL MAKE SURE
THEY'RE HERE A.S.A.P
Quick Facts

American Celebrities
Social Activists
Social Reformers
Black Miscellaneous
Political Activists
Childhood & Early Life
Harriet Tubman was bornAraminta Ross in March 1822, in Dorchester County, Maryland, USA, to Harriet Green and Ben Ross. Her mother, who was owned by Mary Brodess, was a cook.Her father,who was owned byAnthony Thompson, was a skilled woodsman. Records suggest that Harriet had eightsiblings.
Many of her siblings were sold off by her parents’ owners to other slave owners. Her mother resisted and tried her best to stop the owners from selling her children. Her mother’s courage deeply influenced Harriet.
At the age of six, she was considered old enough to work and was hired out as a nursemaid; her duties included taking care of a baby. She was beaten by herowners frequently.
She was sent to work at a plantation after she turned 11. With time, she grew bigger and stronger and was assigned more arduous work like driving oxen, forest work, hauling logs, and plowing.
As an adolescent,she worked at a dry-goods store where she was hit hard on the head by a white overseer. This resulted in a severe head injury and she suffered from seizures and headaches throughout her life. 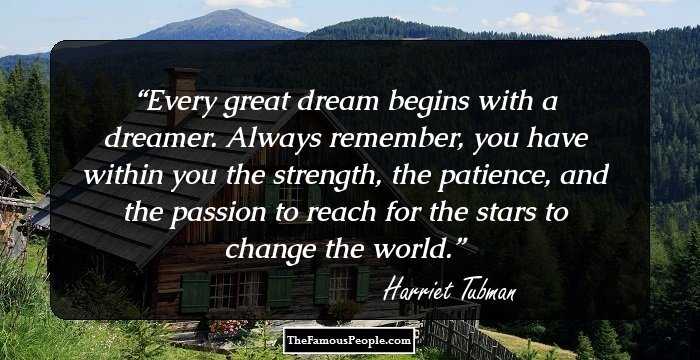 Quotes: You, Change
Continue Reading Below
Later Years
She became ill in 1849 dueto which her value as a slave diminished. Her owner Edward Brodess was trying to sell her but could not find a buyer. Her owner died the same year and the chances of her being sold increased.
She escaped in 1849, along with two of her brothers. But within weeks of their escape, her brothers decided to return and she was forced to return with them.
She then escaped alone, making use of a network known as the ‘Underground Railroad’ that comprised of free and enslaved blacks and white abolitionists and activists. She traveled for nearly 90 miles by foot to finally reach Philadelphia, her destination.
Even though she was free now, she often thought about her family and others still enslaved in Maryland. Around this time, the U.S. Congress passed the ‘Fugitive Slave Law of 1850’ which made it illegal for any citizen to help slaves escape.
She made several trips to Maryland and helped rescue several of her relatives whom she safely brought back to Philadelphia. She became acquainted with abolitionist Thomas Garrett and is believed to have worked with him.
After the ‘Fugitive Slave Law’ was passed, theescaped slaves began migrating to Canada as northern U.S. was very dangerous for them. Tubman guided a group of 11 fugitives northward and probably stopped at the home of abolitionist Frederick Douglass.
Over a period of 11 years, she made several visits to Maryland and rescued many slaves, including several of her own family members.
‘The American Civil War’ broke out in 1861 and Tubman joined the Union Army. She served as a nurse and tended to soldiers suffering from diseases like dysentery and smallpox. The work was physically exhausting and she also faced financial problems.
She became the first woman to lead an armed assault during the ‘American Civil War’ when she leda group of over 700 slaves in the ‘Combahee River Raid.’
Continue Reading Below
She then worked towards promoting the women’s suffrage and cared for her elderly parents. 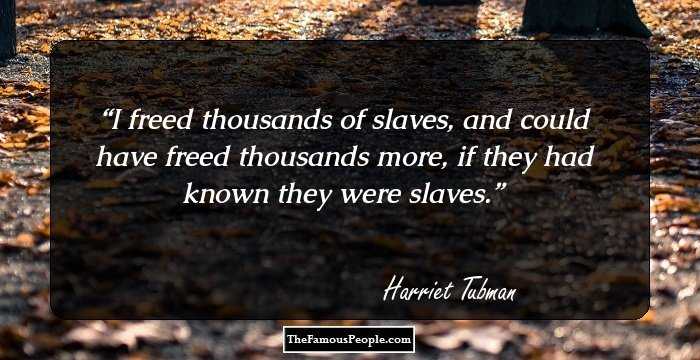 Quotes: I
Major Works
She was a highly respected abolitionist and guided hundreds of slaves to their freedom. She played a very important role in the civil war, caring for sick people and leading an armed forcein the ‘Combahee River Raid.’ She is regarded as one of the most important civilians in the history of America before ‘The Civil War.’
Awards & Achievements
The U.S. Postal Service issued a stamp in her honor in 1978.
‘The Empire State Federation of Women’s Clubs’ erected a gravestone for Harriet Tubman in 1937 which was eventually listed on the ‘National Register of Historic Places’ in 1999. 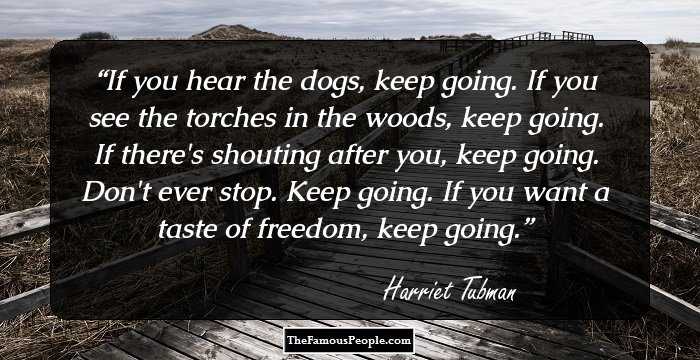 Quotes: You
Personal Life & Legacy
She married John Tubman, a free black, in 1844. However, he did not support her dream of escaping to Philadelphia. Therefore, she had to leave him behind and escape. When she returned to take her husband with her, she discovered that he had remarried.
She married a ‘Civil War’ veteran named Nelson Davis in 1869 and together they adopted a baby girl.
A religious lady, she was involved with ‘The African Methodist Episcopal Zion Church.’ She donated a piece of land to the church for building an old age home for destitute colored people.
With age, the problems that she suffered due to her childhood head injury became more severe. She died of pneumonia in 1913.
Trivia
The television miniseries ‘A Woman Called Moses’ was based on this abolitionist’s life.
Recommended Lists:
Miscellaneous #5
Activists #4

Quotes By Harriet Tubman | Quote Of The Day | Top 100 Quotes

See the events in life of Harriet Tubman in Chronological Order