(Soviet Nuclear Physicist, Dissident and Winner of the 1975 Nobel Prize for Peace)

Advanced Search
Andrei Sakharov was a Russian physicist and Noble Prize winning activist, popularly known as ‘The Father of Soviet nuclear bomb’. He was a great nuclear scientist and an influential political activist, one of the twentieth century's most ardent and unrelenting champions of human rights and freedoms. He conducted research in controlled nuclear fusion and his work eventually led to the creation of the first Soviet hydrogen bomb. His work on the nuclear program, which he popularized as ‘The Third Idea’, ultimately led him down the road towards dissent. Following the test of the first Soviet hydrogen bomb, he became increasingly disturbed by the probable consequences of his work. After some time, he returned to fundamental science and began working on cosmology, but continued to oppose political discrimination. Later in life, he became an increasingly vocal advocate of human rights and when he denounced the Soviet military intervention in Afghanistan, the Soviet authorities banished him to internal exile. He remained a tireless advocate for political reform and human rights for the rest of his life. Despite being an atheist, he did believe that a non-scientific "guiding principle" governed the universe and human life. He was an extraordinary theoretical physicist and a renowned dissident, but above all, a noble symbol of courage, intelligence, and humanity. Pavel Cherenkov
DID WE MISS SOMEONE?
CLICK HERE AND TELL US
WE'LL MAKE SURE
THEY'RE HERE A.S.A.P
Quick Facts

Cause of Death: Arrhythmia

Russian Celebrities
Human Rights Activists
Russian Men
Moscow State University
Male Activists
Childhood & Early Life
He was born on May 21, 1921 in Moscow, to Dmitri Ivanovich Sakharov, a physics teacher and pianist, and his wife, Yekaterina Alekseyevna Sakharova, a homemaker.
He was heavily influenced by thoughts and personality of his parents and paternal grandmother, Maria Petrovna.
In 1938, he enrolled at Moscow State University but during World War II, he was evacuated to Aşgabat, which is a part of present day Turkmenistan from where he graduated in 1942. He then started working in the laboratory of a munitions factory in Ulyanovsk.
In 1945, he returned to Moscow and got enrolled in the P.N. Lebedev Physics Institute of the Soviet Academy of Sciences (FIAN). He completed his doctorate in 1947. 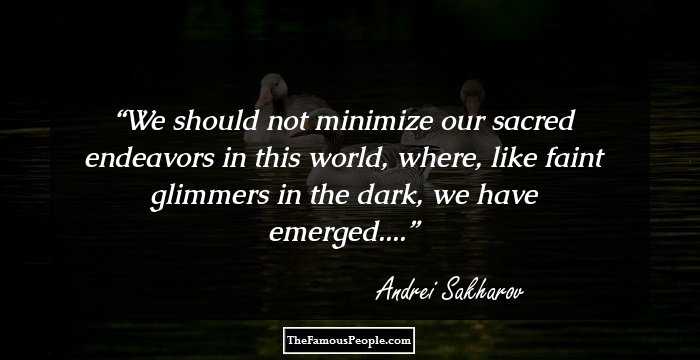 Quotes: Like
Continue Reading Below
Career
After the war, he started his research on cosmic rays and also played a vital role in the development of the first megaton-range Soviet hydrogen bomb using a design known as ‘Sakharov's Third Idea’ in Russia and the Teller-Ulam design in the United States.
During the 1950s and 1960s he became involved in top secret research on thermonuclear weapons in a secret location. Working along with Igor Tamm, he suggested the idea for a controlled nuclear fusion reactor, the tokamak, in the early 1950s.
During the late 1950s, he became concerned about the moral and political implications of his work and protested against nuclear proliferation.
He returned to fundamental science in the late 1960s and began working on particle physics and cosmology. He also proposed the idea of induced gravity as an alternative theory of quantum gravity.
He published his best-known political essay, ‘Reflections on Progress, Peaceful Coexistence and Intellectual Freedom’ in 1968.
In 1970, he became one of the founders of the Committee on Human Rights in the USSR due to which he was severely pressurized by the government.
In 1980, he was arrested following his public protests against the Soviet intervention in Afghanistan and was sent to internal exile in the city of Gorky, where he was detained until 1986.
Major Works
One of his most crucial works was the conceptual breakthrough in development of high-performance atomic weapons. He was the designer of the Soviet Union's ‘Third Idea’, a codename for Soviet development of thermonuclear weapons.
He was also a political activist and humanitarian who developed a strong awareness of the dangers of nuclear testing activity and the irreversible consequences of nuclear war. He also published several prominent articles and other Soviet journals arguing against continued nuclear testing and the arms race.
Continue Reading Below
Awards & Achievements
He received the Stalin Prize in 1953 for his outstanding work in Physics.
He received the Prix mondial Cino Del Duca, an international literary award, in 1974.
In 1975, he was honored with the Nobel Peace Prize for his opposition to the abuse of power and his work for human rights.
In 1988, he received the ‘International Humanist Award’ by the International Humanist and Ethical Union.
In 2003, he posthumously received the Grand Cross of Order of the Cross of Vytis.
The ‘Sakharov Prize for Freedom of Thought’, named after him, is the highest tribute awarded annually by the European Parliament for people and organizations dedicated to human rights and freedom.
The ‘Andrei Sakharov prize’ awarded by the American Physical Society to recognize “outstanding leadership and/or achievements of scientists in upholding human rights", is named in his honor.
Personal Life & Legacy
While working in Ulyanovsk, he met Klavdia Vikhireva, a laboratory assistant, and they got married in July 1943. They were blessed with three children, Tanya, Lyuba, and Dmitry. Unfortunately, Klavdia died in 1969.
While standing vigil at a trial in 1970 he met Yelena G. Bonner, a human rights activist. They got married in 1972 and she became his strongest supporter.
From 1980 to 1986, he was banished from Moscow to Gorky and cut off from contact with family, friends, and colleagues.
He died of a heart attack on 14 December 1989, at the age of 68.
Recommended Lists:
Activists #322

See the events in life of Andrei Sakharov in Chronological Order