George Gamow was a Russian theoretical physicist and cosmologist, perhaps best known for his contributions to George Lemaître's theory of the Big Bang. Other contributions that Gamow made to the sciences included theoretical explanations of alpha decay based on quantum tunneling. He also worked in molecular genetics and on questions of cosmology including stellar nucleosynthesis, radioactive decay, the liquid drop model, and star formation. Aside from his most notable contributions within the scientific community, Gamow reached a broader audience through his teaching and writing. Midway through his career, he began devoting himself increasingly to teaching. As a teacher and as a researcher, Gamow was affiliated with various institutions of higher learning in the United States and Europe. Among these, he worked at the University of Göttingen, the Niels Bohr Institute, Cavendish Laboratory, George Washington University, the University of California, Berkeley, and the University of Colorado Boulder. In addition, he wrote multiple popular science books. Of Gamow’s popular science works, several of them formed a long-running series, which he wrote between 1939 and 1967. Even 50 years after their initial publication, some of his popular science books remain in print, an unusual accomplishment for science writing of any kind, popular or technical. Zhores Ivanovic...
Physicists #147
Scientists #545
DID WE MISS SOMEONE?
CLICK HERE AND TELL US
WE'LL MAKE SURE
THEY'RE HERE A.S.A.P
Quick Facts

Russian Celebrities
Russian Men
Male Scientists
Male Physicists
Pisces Scientists
Childhood & Early Life
On 4 March 1904, Gamow was born to Russian-Ukrainian parents in Odessa, formerly part of the Russian Empire (and currently the Ukraine).
Both of Gamow’s parents were school teachers; his father was a teacher of Russian language and literature at a local high school, while his mother worked as a teacher of history and geography at a girls’ school.
During his childhood, Gamow learned Russian (his mother tongue), French and German languages; he would later become fluent in English, his fourth language, during his late teen years.
In 1923, Gamow left Odessa for Leningrad (now St. Petersburg), where he studied at the ‘University of Leningrad’. 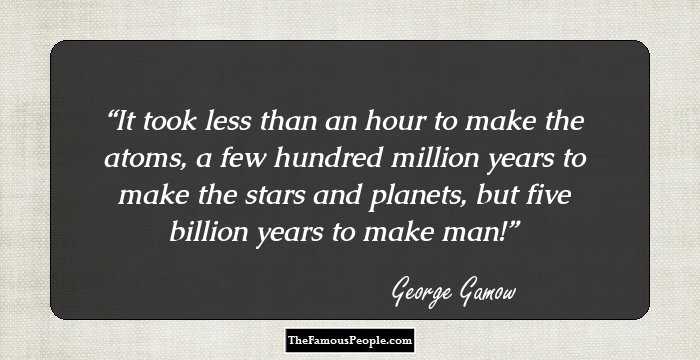 The Hottest Male Celebrities With The Best Abs
Career
In 1929, completed his studies at the ‘University of Leningrad’, having worked largely under the guidance of Alexander Friedmann; following Friedmann’s death, however, Gamow was forced to change thesis advisors.
Beginning in his university years, Gamow formed a friendship was three other theoretical physics students, Lev Landau, Dmitri Ivanenko, and Matvey Bronshtein. Together, the group of four called themselves the “Three Musketeers.”
Following his graduation, Gamow moved to Göttingen, Germany, where he conducted research on quantum theory, focusing on the atomic nucleus.
From 1928 to 1931, Gamow worked at the ‘Theoretical Physics Institute’ at the ‘University of Copenhagen’, briefly interrupting his time at the Institute during collaborations with Ernest Rutherford at ‘Cavendish Laboratory’ at ‘Cambridge University’.
In 1928, Gamow proposed a solution to the theory of alpha decay based on quantum tunneling, working together with Nikolai Kochin to develop the explanation.
During his work at the ‘University of Copenhagen’ and the ‘Cavendish Laboratory’, Gamow first proposed the “liquid drop” model of atomic nuclei.
Between 1931 and 1933, Gamow worked at the ‘Radium Institute’ in St. Petersburg (then Leningrad), collaborating with Lev Mysovskii and Igor Kurchatov to design Europe’s first cyclotron.
In 1933, Gamow was invited to the ‘7th Solvay Conference’ in Brussels and traveled there together with his wife. The couple was helped by other European physicists, like Marie Curie, and thus they managed to prolong their stay in the city.
In 1934, he became a professor at ‘George Washington University’ and immigrated with his wife to the United States.
Continue Reading Below
In 1948, he published a paper together with his former student and cosmologist Ralph Alpher, which introduced a reworking of the Big Bang theory.
In the 1950s, following Francis Crick and James Watson’s discovery of the structure of DNA, George focused his work on biochemistry and genetics.
Between 1954 and 1956, he taught at the ‘University of California’, Berkeley as a visiting professor.
From 1956 until his death, this eminent theoretical physicist taught at the ‘University of Colorado Boulder’, largely shifting his focus toward teaching and science writing.
Major Works
In 1947, Gamow wrote ‘One Two Three … Infinity’, a broad introduction to scientific themes from mathematics to biology, which is still largely credited as the most well received book in the genre of popular science.
Between 1940 and 1967, Gamow wrote a series of five popular science books about a character called “C.G.H. Tompkins”, with topics ranging from atomic structure to human biology.
In 1948, Gamow co-authored a paper with his student Ralph Alpher entitled ‘The Origin of Chemical Elements’, in which they explained how a Big Bang origin to the universe could explain the contemporary amounts of the elements hydrogen and helium.
Awards & Achievements
In 1931, the eminent cosmologist was elected to the ‘Academy of Sciences’ of the USSR at the age of 28, making him one of the youngest inductees in the history of the organization.
In 1956, he received the ‘Kalinga Prize’ from UNESCO for his contributions toward explaining science to a general audience with his “Mr. Tompkins” book series.
Personal Life & Legacy
In 1931, Gamov was debarred from attending a scientific conference taking place in Italy, one event in a series of increasingly oppressive measures under the Soviet Union, which eventually inspired this cosmologist to defect and emigrate.
In 1931, he entered the wedlock with Lyubov Vokhmintseva, another physicist who was also working in the Soviet Union.
In 1935, the couple was blessed with a son, Igor Gamow; he became a naturalized citizen of the United States, where the esteemed physicist and his wife were then living.
After a long struggle with several health ailments and surgeries, this eminent astrophysicist breathed his last on August 19, 1968 in Colorado. He was interred at the ‘Green Mountain Cemetery’.
The probability that a nuclear particle will tunnel through the Coulomb barrier and undergo a nuclear reaction is now known as the ‘Gamow Factor’ or ‘Gamow-Sommerfeld Factor’.
In 1999, Russell Stannard updated Gamow’s popular science book, “The New World of Mr. Tompkins”, expanding on Gamow’s books to include key scientific advances made since his death.
Trivia
This famous scientist gave his first wife, Vokhmintseva, the pet name “rho” after the Greek letter.
The renowned theoretical physicist claimed to have attempted to defect from the Soviet Union two times in 1932, by kayak.
You May Like

See the events in life of George Gamow in Chronological Order