Allen Tate was a famous American poet laureate from Winchester, who initially pursued music and later turned his interests towards literature. Along with his friend and fellow poet Robert Warren, he became a member of literary associations, ‘Fugitives’ and 'Southern Agrarians'. In the beginning this poet was not affiliated to any publication and his contributions to journals and magazines were solely on a freelance basis. Soon, after meeting British poet T.S. Eliot in London, whom he idolized, the American poet started publishing his works. The first book of poems 'Mr Pope and Other Poems' was well-received by literary critics, and it contained one of his finest creations titled 'Ode to the Confederate Dead'. After the success of his initial works, he continued publishing poems and essays, a lot of them talking about his religious and anti-fascist political beliefs. For a brief period of time, he worked for 'The American Review', a popular American magazine that touched upon subjects of politics and literature. Apart from writing on a regular basis, he helped give 'The Sewanee Review' journal a whole new look and feel. He was also a poet-in-residence for ‘Princeton University’ and eventually taught English Literature at the ‘University of Minnesota’, Minneapolis. Art Garfunkel
Poets #939
Writers #4724
Continue Reading Below
DID WE MISS SOMEONE?
CLICK HERE AND TELL US
WE'LL MAKE SURE
THEY'RE HERE A.S.A.P
Quick Facts

American Celebrities
Male Poets
Male Writers
Scorpio Poets
Scorpio Writers
Childhood & Early Life
John Orley Allen Tate was born to entrepreneur John Orley and his wife Eleanor Parke Custis Varnell, on November 19, 1899, in Winchester, Kentucky, United States.
From 1916-17, the young boy attended the 'Cincinnati Conservatory of Music' in Ohio, to pursue his training in violin. The next year he joined the 'Vanderbilt University' in Nashville, Tennessee, where he got acquainted to poet Robert Penn Warren.
Both the budding poets became associated with a literary organization called 'Fugitives', formed by American poet John Crowe Ransom. The group comprised of young poets, and aimed at writing poetry that emphasized on 'meter' and 'rhyme' but not so much on emotions. 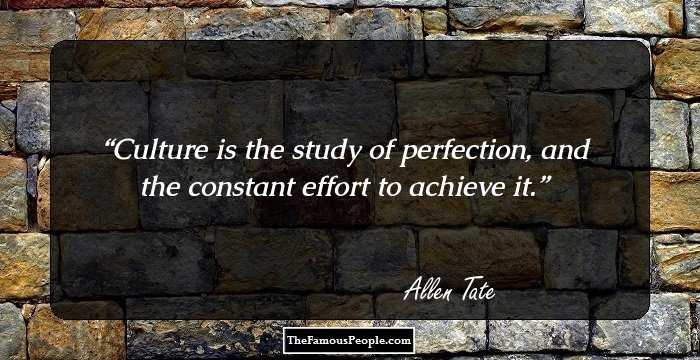 The Sexiest Men Of 2020, Ranked
Career
Tate also began teaching at Ohio's 'Kenyon College', accompanied by his mentor John Crowe Ransom. Allen's formal Modern poetry highly influenced the works of his student—famous American poet Robert Lowell.
Allen travelled to New York City in 1924, and came across fellow American poet Hart Crane, who the former had been in touch with earlier. For the next few years, Tate published his writings in established journals and magazines like 'The Nation', 'Poetry', and 'Hound & Horn', on a freelance basis. Meanwhile he found work as a janitor in order to earn a living.
In 1928, the poet travelled to Europe accompanied by his friends, and met popular English poet T.S. Eliot, who he held in high regard.
The same year, the former's first book of poems titled 'Mr Pope and Other Poems' was released. The compilation included 'Ode to the Confederate Dead', a poem that catapulted the poet to fame. During that time a biography named 'Stonewall Jackson: The Good Soldier' was also published.
In 1929, he wrote an essay, 'The Fallacy of Humanism', where he criticised the established religious systems, by saying "Religion is the only technique for the validation of values". Around the same time, he also published a biography titled 'Jefferson Davis: His Rise and Fall'.
The prolific poet came back from Europe the United States in 1930 and renewed his association with the literary group, 'Fugitives'. Some of the members of the association joined the 'Southern Agrarians', which was a conservative political organization.
The twelve writers in the group collaborated to bring out a book of essays called 'I'll Take My Stand', where they wrote about their political ideology. The book included Tate’s essay ‘Remarks on the Southern Religion’.
During this time, the brilliant poet was made the associate editor of the political-literary magazine 'The American Review', under the leadership of its editor Seward Collins. The former chose the magazine as a medium of publicity for the literary efforts of the 'Southern Agrarians' group.
In 1936, Tate wrote an article for the liberal magazine, 'The New Republic', which opposed fascism, practised by Italian dictator Mussolini and German leader Hitler.
Continue Reading Below
The next year, in 1937, the poet published a compilation of all his earlier poetry, in the book called 'Selected Poems'. The book included popular works like 'Last Days of Alice', 'Mother and Son', and 'Aeneas at Washington'.
The 'Southern Agrarians' published another book, 'Who Owns America?' in 1938, as a retort to the 'New Deal', which included reforms introduced during the term of U.S. President Franklin Roosevelt. The same year, Tate published his first and last novel, 'The Fathers', describing his maternal family, belonging to Fairfax County in Virginia.
In the early 1940s, Tate lived in the campus of 'Princeton University', after being invited to be its poet-in-residence. At the institute he launched the 'Creative Writing' program, and taught famous writers of the likes of John Berryman and Richard Blackmur.
In 1942, the poet collaborated with his friend, novelist Andrew Lytle, to revamp the oldest American journal, 'The Sewanee Review', into one of the most esteemed publications in the country.
He started teaching English at the 'University of Minnesota' in 1951 and worked there till he retired. During the same period, he published several poems as well as essays, including 'The Swimmers and Other Selected Poems', and 'Memoirs and Opinions'.
Major Works
This exceptional American writer’s poem 'Ode to the Confederate Dead' is considered as one of his best works. The poem is inspired by British poet T.S. Eliot's literary style, and with its setting in a graveyard, it laments the death of Confederate soldiers who have been cremated there. The setting and the characters are symbolic of the poet’s own state of mind, and ideas about death.
Awards & Achievements
Allen was named 'Poet Laureate Consultant in Poetry to the Library of Congress', more commonly known as 'United States Poet Laureate' in 1943.
Personal Life & Legacy
In the early 1920s, this gifted poet fell in love with famous American novelist Caroline Ferguson Gordon. They lived in Greenwich Village, Manhattan for some time before moving to New York.
In May 1925, the two writers got married in New York, and had a daughter, Nancy, three years later.
They got divorced after twenty years of marriage, remarried a year later, and separated again, citing irreconcilable differences, even though they were friends throughout their lives.
In 1950, the poet converted to Catholicism, and got married to American poet Isabella Gardner early the same decade.
Tate separated from Gardner in 1966, and married a former nun Helen Heinz, who he taught at the ‘University of Minnesota’. The couple were blessed with twins a year later but unfortunately the younger one passed away in infancy. Three years later Helen gave birth to another son.
On February 9, 1979, the American poet passed away in Nashville, Tennessee, United States.
The writer’s original literary works are available at ‘Princeton University’s ‘Firestone Library’.
Trivia
This popular American writer's poem Ode to the Confederate Dead' is often confused with 'Ode to the Confederate Dead at Magnolia Cemetery', written by American poet Henry Timrod.
You May Like

See the events in life of Allen Tate in Chronological Order