James Mercer Langston Hughes is remembered as one of the greatest contributorsto the artistic realm of the Harlem Renaissance. A poet and writer by profession, Hughes was an African-American. Through his exquisite literary compositions, he told stories of the sufferings and the life of the black people. During the 1920s when writers chose to stream their content, making their compositions worthy of only the highly literate, Hughes’ writings came as an elementary relief to those who could just about read and didn’t possess opulent knowledge. His poetry was straight forward and often meant for the black community. He had a particular penchant for jazz music. In fact, he created a brand new genre of American poetry that was later called jazz poetry. Gaining support for his work, he went on to write short stories, plays and columns. It was his dauntless ability to express the black life with all its honesty that won him plenty of admiration later in his career. The columns he wrote largely uplifted the morale of the blacks who were subjugated to racism. His famous work ‘When Harlem was in Vogue’ received plaudits from sundry writers. Cause of Death: Abdominal Surgery

awards: Hughes won the Witter Bynner Undergraduate Poetry Prize.
Hughes was awarded a Guggenheim Fellowship
which allowed him to travel to Spain and Russia.

American Celebrities
Playwrights
American Men
Lincoln University
Columbia University
Childhood & Early Life
James Hughes was born on 1 February 1902 in Joplin, Missouri, to Native Americans with Afro-American ancestry. His mother, Carrie Langston was a school teacher and his father was James Nathaniel Hughes.
Shortly after his birth, his father abandoned their family and later filed for divorce. Seeking desperately to acquire a job, Carrie travelled to and fro for better opportunities.
Carrie’s mother took over the responsibility of bringing up little James Hughes in Kansas. However, when old age caught up with her, she couldn’t take good care of him and when he was thirteen his grandmother expired.
After the death of his grandmother, he moved to Ohio, where he finally lived with his mother. As a young boy, Hughes felt tremendously insecure as the love he sought from both parents was never received by him.
In high school, he learned about various authors and poets; in one such lesson he came across the works of Carl Sandburg and Walt Whitman who inspired his flair for writing.
He regularly wrote poetry for his school’s literary magazine and gradually his drive for writing poems and short stories developed. He also submitted his poetry to other dailies that rejected his work.
During this phase, his mother and step-father moved to Chicago as his step-father had procured a better job. But Hughes stayed back in Ohio to complete his high school education.
His father James Nathaniel stepped into his life once again and offered to take him home to Mexico for the summer vacation. He agreed to live with his father, in want of knowing him better but their bond couldn’t thrive.
After the summer, he returned to Cleveland, Ohio, to complete his high school. By then, his poetry skills had started getting even better. His teachers commended his writings and encouraged him to study at Columbia University. 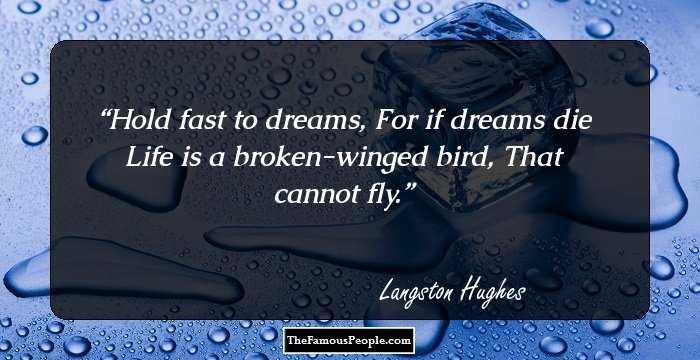 Quotes: Dreams
Continue Reading Below
The Rise of a Harlem Poet
On concluding his high school education, Langston Hughes took a train back to his father in Mexico in 1920, hoping that his father would identify his talent and provide for his further education.
It was in the course of this journey that he wrote the legendary poem ‘The Negro Speaks of Rivers’. On reaching Mexico, his father was astounded to hear of his son’s literary preference as he had wanted his son to study engineering instead.
In retaliation, Hughes sent a few of his poems that were published in ‘The Crisis’ magazine. On reading his son’s published poems, James Nathaniel had a change of heart and he paid for his son’s education at Columbia University in 1921.
At the university, he was greatly influenced by the Harlem Renaissance, which contributed greatly to the revival of Afro-American literature and art.
He was more inclined towards the movement than his syllabi. Though he maintained a consistently good performance at the university, owing to his growing interest in social activities he left his studies midway in 1922.
He took up odd jobs for survival. He then served as a marine steward on ‘S.S. Malone’ that frequented West Africa and Spain. For a brief span after his marine expedition he stayed in Paris, all this while never ceasing to write and publish poetry.
In 1925 he became the personal assistant of the renowned historian Carter G. Woodson at the Association for the Study of African American Life and History. Work as an assistant proved to be difficult for him as he had to devote plenty of his time to the requirements of Carter.
Hence, he resigned from his post and focused on writing poetry, subsequently working as a busboy at the local Park hotel to earn his livelihood. Fortune brought him to chance upon the poet Vachel Lindsay who supported his ventures as a poet.
Around this time he entered Lincoln University on a scholarship and graduated with a B.A. degree in 1929 and travelled back to New York to join the Harlem Movement.
Continue Reading Below 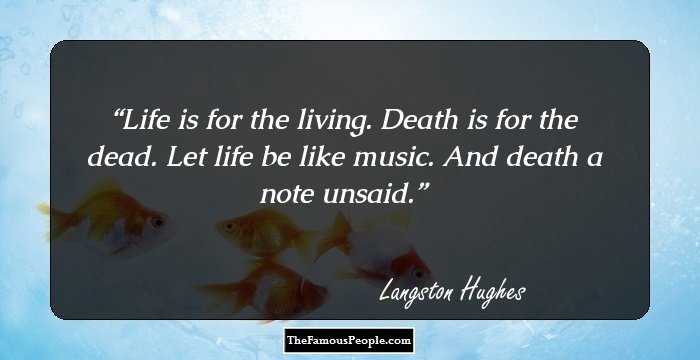 Quotes: Life, Death, Like, Music
Finding Literary Success & Political Activism
Langston Hughes published his first novel. ‘Not without Laughter’ in 1930;his novel portrayed the life of a black American who juggles between the juxtaposing attitudes of parents with dissimilar values.
The success of his novel made him adamant to pursue writing as a career. Around this time, he often travelled to other countries including the Soviet Union. After he returned from the Soviet Union, he was flabbergasted at the racial discrimination rife in the States.
His ideals moved politically to the left wing and thus, he wrote ‘The Ways of White Folks’ in 1934. In 1937, for his play ‘Don’t You Want to Be Free?’ he built the Harlem Suitcase Theatre.
After the Second World War and its devastating consequences, his rigid political ideals slowly began to sober. In 1940, he wrote a humorous autobiography, titled ‘The Big Sea’, in which he expressed no political ideology.
Yet, he disagreed with any form of racial discrimination and socially condemned it through his books ‘Shakespeare of Harlem’ in 1942 and ‘Jim Crows Last Stand’, 1943.
He also edited African American books in the last years of his career. In addition, he had written almost 20 plays and majorly translated the works of Federico Lorca and Gabriela Mistral.
The Columnist
James Hughes wrote a weekly column in the reputed ‘Chicago Defender’ for twenty years. The column featured the fictional character of Jesse B Semple or ‘Simple’ who made commentary pertaining mainly to racism.
‘Simple’ portrayed an eloquent spokesman for African Americans. Subjects debated upon by ‘Simple’ in the column were diverse and intense.
Continue Reading Below
Hughes compiled a collection that was edited and titled ‘Simple Speaks His Mind’ in 1950 that containedthe character’s musings which werethought-provoking and witty at the same time. 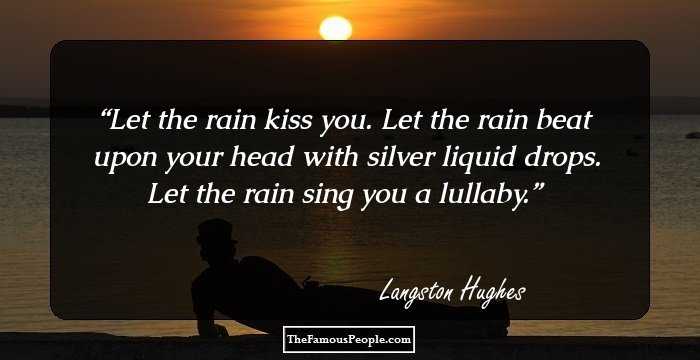 Quotes: You
Major Works
Langston Hughes produced some of the finest works of his time, such as the popular play ‘Mulatto’ in 1935, that was centred around mixed races and a sense of parental rejection.
He cleverly weaved social discrimination into comedies such as ‘Little Ham’ of 1936 and the ‘Emperor of Haiti’ in the same year.
It was in the verses of ‘Montage of a Dream’ that he looped his love for jazz music poetry. The verses were discordant and thus created a new avenue for poetry.
The second volume of his autobiography written in 1956 is called ‘I Wonder as I Wander’. It was a meandering and effortless portrayal of life through his eyes that won huge recognition.
He also wrote stories for children on jazz, West Indies, and Africa. His most famous children’s work was a jointly written book by Arna Bontemps and himself, titled ‘Popo and Fifina’ in 1932.
In 1960 he wrote a poem that ran into several pages called ‘Ask Your Mama’ that bore great significance to black life and culture. His last book ‘The Panther and the Lash’ was posthumously published in 1967.
Awards & Achievements
In 1954, he received the Anisfield-Wolf Award for a book that incorporated measures to bind diverse communities and races.
As a result of his umpteen recordings and music commentary of his own poetries he was elected to both – the National Institute of Arts and Letters and Academy of Arts and Sciences.
Hughes was awarded the ‘Spingarn Medal’ by NAACP in the category of most distinguished African American in 1960.
In 1963 he was awarded an honorary doctorate degree by the Howard University.
Towards the fag end of his career he was named the ‘Poet Laureate of the Negro Race’, as he was the most original in representing the Negro race.
Personal Life & Legacy
James Hughes had one romantic involvement in his lifetime with Anne Marie Coussey, but owing to his lack of interest, the relation didn’t last long. In fact, he was majorly known to be asexual yet many historians suggest that his autobiography subtly hints at him being a homosexual.
The world saw the last of Hughes on 22 May 1967. He died in New York at the age of 65. His death resulted from complications that emerged after an abdominal surgery conducted to eradicate prostate cancer.
His body was burnt and his ashes have been placed in the centre of the foyer at Schomburg Center for Research in Black Culture in Harlem.
His home at 20 East 127th Street in Harlem has been deemed a landmark by New York Preservation Commission.
Recommended Lists:
Activists #62

Quotes By Langston Hughes | Quote Of The Day | Top 100 Quotes

See the events in life of Langston Hughes in Chronological Order