Alfred G. Gilman was an American pharmacologist and biochemist, best known for his discovery of G-protein. Born to a well-known pharmacologist, Alfred Zack Gilman, he earned his bachelor’s degree from Yale University and his M.D. and Ph. D. from Case Western Reserve University. Subsequently, he joined the School of Medicine, University of Virginia as the Assistant Professor of Pharmacology. It was here that he set out to find the missing link in Martin Rodbell’s work on cyclic AMP and guanosine triphosphate (ATP). The investigation resulted in the discovery of G-protein, an important intermediary between receptors on the cell membrane and subsequent actions inside the cell; a discovery that earned him the Nobel Prize in Physiology or Medicine almost fourteen years later. Meanwhile he accepted the position of the Chairman of the Department of Pharmacology at the Southwestern Medical Center at University of Texas and remained there till his retirement. Afterwards, he was appointed as Chief Scientific Officer at the Cancer Prevention and Research Institute of Texas; but due to commercial and political interference resigned within three years. He lived for another three years before losing his long battle with pancreatic cancer. American Celebrities
American Men
Male Scientists
Cancer Scientists
American Scientists
Childhood & Early Years
Alfred Goodman Gilman was born on July 1, 1941, in New Haven, Connecticut. His father, Alfred Zack Gilman, was a pharmacologist, best known for pioneering chemotherapy techniques using nitrogen mustard. He was also the co-author of the classic text book, ‘Goodman & Gilman's The Pharmacological Basis of Therapeutics’.
His mother, Mabel Schmidt Gilman, was an excellent pianist and also a piano teacher. He had an elder sister, Joanna Gilman. The family lived in White Plains, an affluent suburban county just north of New York City.
Alfred Goodman began his education at a local elementary school in White Plains. Later in 1955, he was sent to The Taft School in Watertown, Connecticut. Here he completed grades 10 to 12.
On graduating from school, Gilman entered the Yale University for his B. Sc degree. Here, he was especially inspired by Henry A. Harbury’s lectures on protein chemistry and thermodynamics. Besides, he also enjoyed working at the laboratory of Melvin Simpson and benefited from the latter’s warmth and strong encouragement.
Eventually, he graduated from Yale in 1962, earning his B. Sc. in biology with biochemistry as his major. By now he knew that he wanted to research and so he joined the laboratory of Allan Conney at Burroughs Wellcome & Company in New York. It was here that he published his first two papers.
Sometime now Earl Wilbur Sutherland, Jr, famed for his discovery of cyclic AMP and also his father’s friend, persuaded young Gilman to join Case Western Reserve University in Cleveland for a combined M.D.-Ph.D. program. Although initially he showed reluctance, he ultimately joined the program in the fall of 1962.
Here, he completed his doctoral work under Sutherland’s collaborator, Theodore Rall, who at that time was working on the cyclic AMP in the brain. Under him, Gilman began to work on thyroid gland. Finally he earned both the M.D. and Ph.D degrees in 1969.
Continue Reading Below
You May Like

Famous Beautiful Women With Green Eyes
Career
Soon after receiving his M.D. and PhD degree in 1969, Alfred G. Gilman joined National Institute of General Medical Sciences via the Pharmacology Research Associate Training Program for his post-doctoral work. Here he studied with Marshall Nirenberg, who assigned him to work on axons from cultured neuroblastoma cells.
However, Gilman found the work absolutely uninteresting. So, he started working on a new technique for studying protein binding. Nirenberg highly appreciated the work and had it published in 1970. Very soon it was accepted as a simple, but very important biochemical test for studying cyclic AMP.
The work made him quite famous and in 1971, he received appointment as the Assistant Professor of Pharmacology at the School of Medicine, University of Virginia. Here, he began to investigate how chemical signals are transmitted from the outside to the inside of a cell, a method known as transduction.
By then, Martin Rodbell had established that cyclic AMP is activated when guanosine triphosphate (GTP) is released from the cell membrane. However, it was not yet known how the GTP molecules were produced. Gilman first started on the signaling process in mutant cells.
Subsequently, he found that leukemia cells did not respond to external signals sent by hormones because of loss of certain proteins. Next, he implanted the missing proteins from normal cells into the membrane of the cancerous cells; this restored the cell’s capacity for transduction.
From 1977, Gilman began to publish the results of his experiments in a series of papers. In the same year, he also became a full professor and continued working on the same project.
In 1980, he was able to identify the particular protein, whose loss caused the loss of transduction in cancerous cells. He named it G-protein because it binds with guanosine triphosphate molecules, which is central to the transduction process.
In 1981, Gilman shifted to the Southwestern Medical Center at University of Texas as the Chairman of the Department of Pharmacology, retiring from there in 2009. Meanwhile in 2004, he became dean and in 2006, the Executive Vice President for Academic Affairs and Provost.
After retiring in 2009, he joined Cancer Prevention and Research Institute of Texas as Chief Scientific Officer. It was a government agency authorized to spend $3 billion for cancer research and prevention programs in Texas over a period of 10 years.
Continue Reading Below
In 2012, Gilman resigned from the post because he felt there was too much commercial and political interference. He was especially disturbed about a $20 million commercial grant, which was awarded to the M.D. Anderson Cancer Center and Rice University without any scientific review.
Apart from his mainstream academic work, Gilman was involved in several other projects. From 1980 to 2000, he edited several editions of ‘Goodman and Gilman’s The Pharmacological Basis of Therapeutics’, which was coauthored by his father and his friend Goodman.
In addition, he co-founded a biotechnology company called Regenere and also a global collaboration for the study of cell signaling called Alliance for Cellular Signaling. He also played an active role in the ‘creation-evolution controversy’, defending science education vigorously.
Major Works
Alfred G. Gilman is best remembered for his discovery of G-protein. His research in this field has helped the scientists to understand how the body receives signals from a variety of hormones in the body and how it reacts to different stimulus like light and odor.
His researches also established that G-proteins are involved in “everything from sex in yeast to cognition in humans” and that their absence can disrupt the normal signal transduction process and cause many diseases like hereditary glandular disorders, cancer, cholera, diabetes, whooping cough, alcoholism etc.
Awards
In 1994, Alfred G. Gilman received the Nobel Prize in Physiology or Medicine for his “discovery of G-proteins and the role of these proteins in signal transduction in cells". He shared the prize with Martin Rodbell, who had also worked on the same subject.
In 1984, Gilman received the Canada Gairdner International Award "for elucidating the mechanism by which peptide hormones act across cell membranes to influence cell function".
Other than that, he received John J. Abel Award (1975), Richard Lounsbery Award (1987), Louisa Gross Horwitz Prize (1989) and Albert Lasker Award for Basic Medical Research (1989).
Personal Life & Legacy
Alfred G. Gilman met his future wife, Kathryn Hedlund, while they were working at Melvin Simpson’s laboratory at Yale University. Later they got married while he was studying at Case Western Reserve University in Cleveland.
The couple had three children; Amy, Anne and Edward (Ted) and five grandchildren. Mrs. Gilman was very supporting of her husband’s work and took care of the family almost singlehandedly.
Towards the end of his life Gilman suffered from pancreatic cancer. He died on 23 December 1915 after a long battle with the disease.
Trivia
Because his father, Alfred Zack Gilman, was a well-known academic and scientist, Alfred Goodman Gilman had later commented that he was born "with a scientific/academic silver spoon". Some other time he mentioned that he was born with a pestle, but not a mortar
Gilman got his middle name from Louis S. Goodman, who coauthored ‘Goodman & Gilman's The Pharmacological Basis of Therapeutics’ with his father. Much later his friend, Nobel Laureate Michael Stuart Brown, jokingly said that Gilman was "probably the only person who was ever named after a text book”.
You May Like

See the events in life of Alfred G. Gilman in Chronological Order 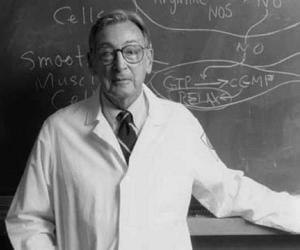