Alexander von Humboldt was a German geographer, naturalist and explorer who laid the foundation for the field of biogeography and modern geomagnetic and meteorological monitoring. He had an unrelenting passion for nature and often spent time accumulating samples of plants, insects and shells, and even categorized them. As a child he received lessons in a variety of subjects beginning from languages to economics. However, he was always drawn towards nature and also had an inquisitiveness to know more about it. As a young lad he decided to embark on expeditions in order to satiate his craving for knowledge about the different plants species and also know the earth in a better and vast way. Humboldt also leant about minerals in the mining school where he was a student, and his voyages through England enhanced his knowledge. His study in mineralogy incorporated with the knowledge he accumulated during his expeditions helped him get a mining job in Berlin. He was efficient enough in his duties and soared high in the department. However, he always craved to know more about the earth and exploration was the only means to help him in this. So he left the job and with the fortunes he was entitled to from his mother, he embarked on a new journey. He realized many unknown secrets about nature and shared these with the world, in his renowned book ‘Kosmos’ 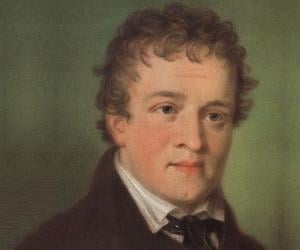 German People
Geographers
Naturalists
German Men
German Naturalists
Childhood & Early Life
He was born to Alexander Georg von Humboldt and Maria Elizabeth Colomb on 14th September, 1769, in Berlin, in the historic state of Prussia. He had a sibling named Wilhelm.
His mother was entitled to a good fortune and took up the responsibility of her children after the death of Alexander’s father in 1779. He and his brother were educated at home by private tutors in subjects such as political history, mathematics, economics and various languages.
From his early childhood, he had a knack for observing and gathering specimens of plants, insects and shells, and this earned him the nickname ‘the little apothecary’.
Later, he enrolled at the ‘University of Frankfurt (Oder)’ as a student of finance for a brief period of time.
In 1789, he enrolled at the ‘University of Göttingen’ and the same year he embarked on an expedition to the Rhine River. During this trip he wrote the piece ‘Mineralogische Beobachtungen über einige Basalte am Rhein’ (Mineralogic Observations on Several Basalts on the River Rhine). 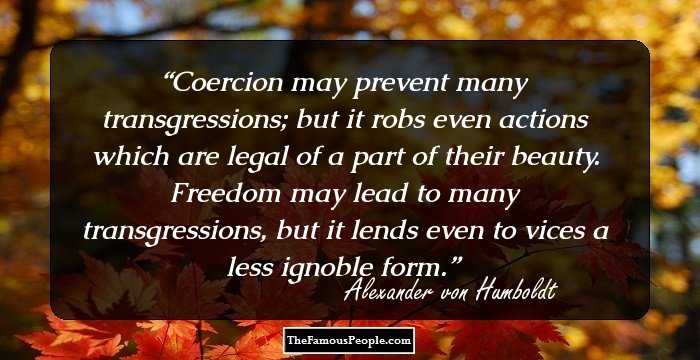 The Sexiest Men Of 2020, Ranked
Career
At the university Humboldt developed an interest for geology and mineralogy and later, joined the ‘Freiberg Academy of Mines’, where he was trained under the tutelage of renowned geologist A.G. Werner.
He also got acquainted to George Foster, who was the illustrator of famous explorer Captain James Cook. George and Alexander went on voyages throughout Europe. In 1790, the duo travelled to England during the summer.
In 1792, Alexander got a mining job at Berlin and was posted as assessor of mines. He worked exceptionally well and soon moved up the ranks in the department. Many diplomatic undertakings were also assigned to him.
From 1792-97, this explorer had settled in the Austrian city of Vienna and in between embarked on a short trip to Italy and Switzerland.
At the mining department, he worked rigorously from morning to evening, and amassed immense knowledge in this field. In 1793, he published a book named ‘Florae Fribergensis Specimen’ based on his study of the flora in the mines.
In 1794, he was inducted in the coterie of Weimer and the following year, his article named ‘Die Lebenskraft, oder der rhodische Genius’ was published in the periodical ‘Die Horen’.
In 1796, his mother died and he was entitled to a huge amount of wealth. The following year, he resigned from his job at the mining department and embarked on an expedition along with botanist Aimé Bonpland, and they travelled to Marseille and then to Madrid.
There they encountered the minister of Spain named Don Mariano Luis de Urquijo who asked them to explore the Spanish American region and also sponsored their voyage.
They travelled through Latin America from 1799 to 1804, exploring Pizarro, Tenerife, Cumana, and within one year of the voyage Alexander drew maps of a vast range of the Orinco River.
Continue Reading Below
They then travelled to Ecuador and Lima in Peru, which was the end of this voyage. As the discoverer, Alexander is the eponym for Peruvian current, which is commonly known as the ‘Homboldt Current’.
During his journey through the American regions, the transit of the planet Mercury was perceived by him and he also understood the fertilizing qualities of the dung of the seabird known as guano. These explorers also chanced upon the electrical properties of the eels during the expedition.
After the completion of this long and experimental journey, he travelled to the United States and paid a visit to the President Thomas Jefferson, who was also a scientist. He spent some quality time with the president and both gained from the others knowledge.
He travelled to Europe after his brief stay in the White House. He went to Paris where he spent the following twenty three years of his life. From 1804 to 1827, he was engaged in writing scientific pieces which encompassed his experiences in discoveries during the voyage of American regions. He published around thirty volumes of such pieces during this period.
Gradually, the fortunes which he had inherited from his mother were exhausted and Alexander then became an advisor to the Prussian King in order to earn a living.
In 1827, he travelled to Berlin and began to give public speeches, which earned him immense fame. Eventually, he made up his mind to pen all his experiences during all these years, and share his knowledge about the earth and nature, and began working on his greatest work.
In 1945, the first volume of the book reached completion which was entitled ‘Kosmos’. This was one of the greatest contributions made by this naturalist to the world of earth science. In following years, the subsequent volumes of the book were published. 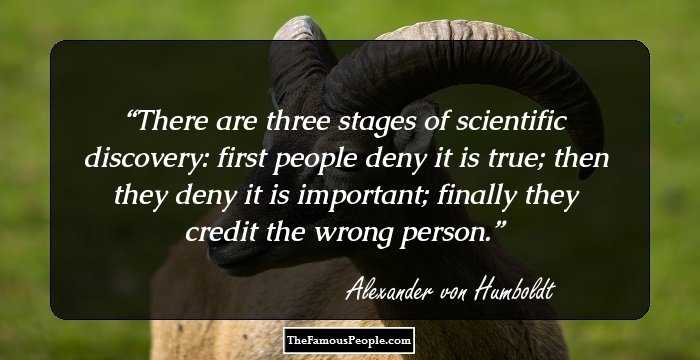 Major Works
His book ‘Kosmos’ can be regarded as one among his greatest works where he instilled all his knowledge about natural science. He collected much data during his life and advocated that all the physical science such as meteorology, biology and geology have an interrelated relationship.
Personal Life & Legacy
His personal life is shrouded in mystery as reportedly, all his personal letters were destroyed by him.
He had amassed some wealth and all these were given to his domestic helper Seifert, a few years before his death.
This eminent naturalist breathed his last on 6th May, 1859, in Berlin and his rearing place is at Tegel.
This learned explorer discovered many species which were unknown to Europe and some of the species have been named after his such as ‘Humboldt penguin’, ‘Lilium humboldtii’, ‘Quercs humboldtii’, Utricularia humbldtii’, Annona humboldtii’ and ‘Salix humboldtiana’.
Some of the geographical features and places named after him include ‘Humboldt Bay’, ‘Humboldt River’, ‘Pico Humboldt’, Humboldt Sink’, ‘Sima Humboldt’, ‘Humboldt Falls’, Hacienda Humboldt’, ‘Humboldt Kansas’, ‘Humboldt, Illinois’, ‘Humboldt Arizona’ and ‘Alexander von Humboldt National Forest, Peru’.
The astronomical features named after this famous geologist are ‘Mare Humboldtianum lunar mare’ and ‘asteroid 54 Alexandra’. Many school and colleges have also been named after Humboldt. 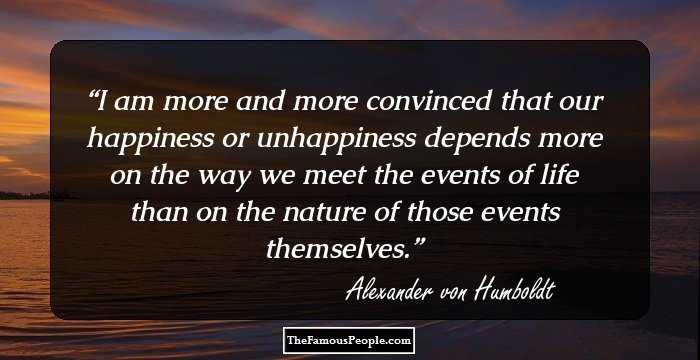 Quotes: Life, Nature, Happiness, I
Recommended Lists:
Intellectuals & Academics #413
You May Like