Sir Charles Lyell was a British attorney and premier geologist of the 19th century. He is best remembered as the author of 'Principles of Geology,' which popularized the concept that the Earth was shaped by geological processes that continue today. He was introduced to science, particularly geology by his father who was a naturalist. He moved to London to become a barrister, or a lawyer specializing in higher court litigation, although his poor eyesight made it impossible. This prompted him to start his career in science. He was one of the first scientists to believe the Earth is older than 300 million years, and his scientific contributions contributed to the world's understanding of volcanoes, earthquakes, and geology. His version of geology was eventually called ‘uniformitarianism’ due to his insistence that processes that change the planet are uniform throughout time. He created a lens through which to view Earth's history, establishing that the forces that shape the planet have remained the same throughout time. Lyell was also a close friend of Charles Darwin and contributed to Darwin's thinking on evolution. His work, 'Principles of Geology', influenced Darwin so deeply that he imagined evolution as a type of biological uniformitarianism. To know more about the life and works of this eminent geologist read on Charles Darwin
Geologists #7
Geographers #18
Scientists #402
DID WE MISS SOMEONE?
CLICK HERE AND TELL US
WE'LL MAKE SURE
THEY'RE HERE A.S.A.P
Quick Facts

British People
British Men
Male Scientists
Scorpio Scientists
British Scientists
Childhood & Early Life
He was born on November 17, 1797 to Charles Lyell, the son of a wealthy gentleman who inherited a large estate in Scotland.
The eldest of 10 children, he attended several private schools throughout his early life. Later he studied at the ‘Exeter College’, Oxford from 1816 to 1819, graduating BA second in classics.
After graduating, he moved to London to study law, although his weak eyesight made his studies difficult. To find relief, he turned to geological work outdoors, which led to his career in geology. 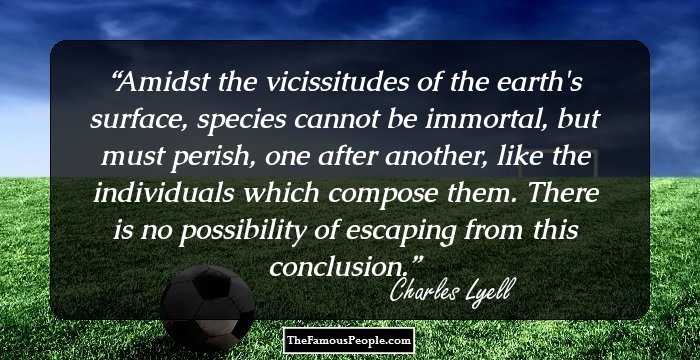 The Best Black Actresses Of All Time
Career
He met renowned naturalist Georges Cuvier and Alexander von Humboldt on a trip to Paris in 1823, and had the opportunity to study the Paris Basin.
In 1824, he studied sediment formation in freshwater lakes close to Kinnordy, Scotland.
In 1825, Lyell was admitted to the bar, although his father's financial support allowed him to practice geology more than law. He published his first geological papers that year.
While still practicing law, Lyell began planning a book to stress that there are natural explanations for geological phenomena and that these forces are unchanging through time.
Between 1828 and 1829, he studied the region of Mt. Etna, where he found evidence to confirm his beliefs.
After returning to London, he began work on his book, 'Principles of Geology,' the first volume of which was published in 1830.
Lyell's book made his argument for uniformitarianism, or the idea of uniform geological forces that have shaped earth throughout its history. The book was controversial as many people relied on the biblical story of the flood to explain earth's geological features.
He published the second and third volumes of the 'Principles of Geology' between 1831 and 1833.
He lived a quiet life for the next eight years, devoting his time to revising his book and gathering data for new editions.
Continue Reading Below
In 1838, he published 'Elements of Geology,' which described European fossils and rocks from the most recent to the oldest discovered.
Beginning in 1841, he spent a year traveling and lecturing in North America, which included a lecture at the Lowell Institute in Boston that attracted thousands.
In 1858, after exhaustive study, he proved that Mt. Etna was built by repeated small volcanic eruptions instead of a single large upheaval as many geologists of the time believed.
Late in his career, he published 'Student's Elements of Geology,' a condensed version of his three-volume work that by then had become very large.
Major Works
He wrote 'Principles of Geology,' which challenged many popular geological theories of the time and explained earthquakes, volcanoes, and other geological principles.
He published 'Antiquity of Man' in 1863, which discussed proof of the long existence of humans on the earth.
Awards & Achievements
He was awarded the geology chair of ‘King's College’, London in 1831, although he resigned after three years due to the Church of England's influence over the institution.
He was awarded the prestigious ‘Royal Medal’, or ‘Queen's Medal’, in 1834 for his scientific achievements. This medal is awarded every year by the ‘Royal Society’ for important contributions to the advancement of knowledge.
In 1858, he received the ‘Copley Medal’, which is the highest award of the ‘Royal Society of London’.
In 1866, he was awarded the ‘Wollaston Medal’, a scientific award for geology that is the highest award granted by the ‘Geological Society of London’.
He was made a foreign member of the ‘Royal Swedish Academy of Sciences’ in 1866.
Personal Life & Legacy
In 1832, Lyell married Mary Horner, who was also associated with the ‘Geological Society of London’.
He died on February 22, 1875 at the age of 77 of natural causes. He was buried in Westminster Abbey.
Places named after him include Lyell, New Zealand; Mount Lyell in California; Mount Lyell in Canada; Lyell Land in Greenland; Mount Lyell in Tasmania; Lyell Glacier in South Georgia; and Lyell Canyon.
Trivia
Charles Darwin took Lyell's book 'Principles of Geology' with him on his voyage aboard the 'Beagle.'
Lyell was one of the first to donate books to help found the ‘Chicago Public Library’ following the ‘Great Chicago Fire of 1871’.
Recommended Lists:
Intellectuals & Academics #564
You May Like

See the events in life of Charles Lyell in Chronological Order