Albert Pike was an American writer, poet, attorney, journalist, army officer, and prolific member of the Freemasons. He served as an officer in the Confederate States Army, leading the District of Indian Territory in the Trans-Mississippi Theater of the American Civil War. Originally from Massachusetts, Pike studied at schools in Newburyport and Framingham. Despite successfully taking the Harvard University entrance examination, he did not enrol there due to complications with tuition fees. He lived in Nashville, Tennessee, for a while after leaving Massachusetts before relocating to St. Louis, Missouri. Pike took part in a hunting and trading expedition to New Mexico and a trapping expedition to New Mexico and Texas. After settling in Arkansas, he began his career as a journalist and lawyer. He participated in two major wars in US history, the Mexican-American War and the Civil War. In 1861, he was appointed a brigadier general and assigned the command of the Indian Territory. Pike had been a Freemason since 1840 and later entered a Masonic Lodge. In 1859, he was chosen as Sovereign Grand Commander of the Scottish Rite's Southern Jurisdiction, a title he held for the rest of his life. American People
Military Leaders
American Men
Male Lawyers
Male Leaders
Childhood & Early Life
Born on December 29, 1809, in Boston, Massachusetts, USA, Albert Pike was the son of Benjamin and Sarah (Andrews) Pike. He grew up in Byfield and Newburyport, Massachusetts. Pike was educated in schools in Newburyport and Framingham until the age of 15.
In August 1825, he successfully took entrance exams at Harvard University. However, after the university asked him to pay tuition fees for the first two years, he decided not to enrol there. He then embarked on a program of self-education. Later, he began his career as a schoolteacher in Gloucester, North Bedford, Fairhaven, and Newburyport.
Pike was a man of large stature. He was six feet tall and 300 pounds. His long hair flowed down to his shoulders, and he maintained a long beard. In 1831, he made his departure from Massachusetts and lived in Nashville, Tennessee, for a short period, before travelling to St. Louis, Missouri.
While in Missouri, he became part of a hunting and trading expedition to Taos, New Mexico. While he was on his excursion, his horse broke and fled, leaving Pike to trek the remaining 500 miles to Taos. He subsequently participated in a trapping expedition to the Llano Estacado in New Mexico and Texas. Although he did not trap many animals, he rode and walked for 1,300 miles to reach Fort Smith, Arkansas. 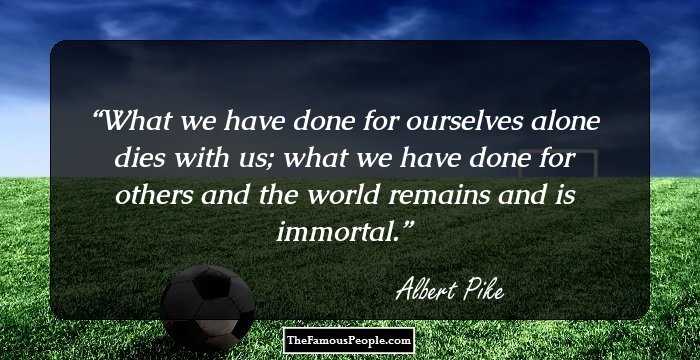 Quotes: Life, Alone
Continue Reading Below
You May Like

The Sexiest Men Of 2020, Ranked
Career as a Journalist & Lawyer
After Albert Pike began living in Arkansas, he acquired a job as a teacher and adopted the pen name “Casca” to author several articles for the ‘Little Rock Arkansas Advocate.’
These articles garnered a positive response, and he was offered a position in the newspaper’s staff. After he took over, the newspaper endorsed the opinions of the Whig Party in a politically tumultuous and segregated Arkansas in December 1832. After his marriage in 1834, he bought the newspaper.
He has the distinction of being the first reporter for the Arkansas Supreme Court. He authored a guidebook for lawyers, titled ‘The Arkansas Form Book’, which he put out anonymously. He then started pursuing a law degree and was granted admission to the bar in 1837. Also in that year, he sold the ‘Little Rock Arkansas Advocate.’
Pike established multiple contacts among the Native American tribes in the area and made a name for himself as an attorney who represented Native Americans in lawsuits against the federal government.
In 1852, Albert Pike served as an attorney for the Creek Nation in front of the Supreme Court in a lawsuit concerning ceded tribal land. In 1854, he represented the Choctaw and Chickasaw. However, the compensations given to them in 1856 and 1857 were not adequate. The relationships he forged during this period proved to be pivotal for him during the Civil War.
He published several books on various legal subjects. Since he was a youth in Massachusetts, he had been a poet. His first published poem is ‘Hymns to the Gods’, which he put out when he was 23 years old.
During his lifetime, his poems garnered him much recognition, but not many people know about them in modern times. In 1859, Harvard University awarded him an honorary Master of Arts degree. 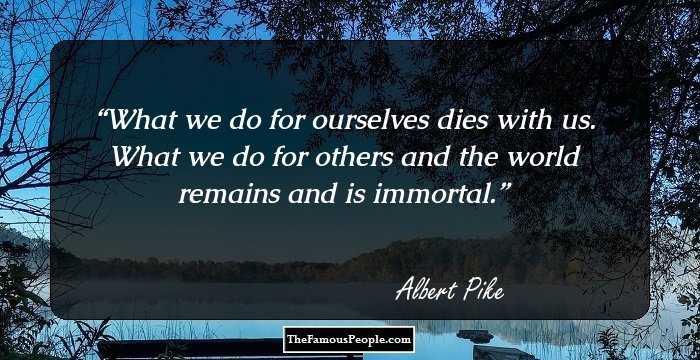 Military Career
After the Mexican-American War broke out, Albert Pike enlisted in the Regiment of Arkansas Mounted Volunteers (a cavalry regiment). He was subsequently appointed a troop commander with the rank of captain in June 1846.
Continue Reading Below
Pike took part in the Battle of Buena Vista in 1847. He regularly got into disputes with his commander Colonel John Selden Roane, which culminated in an inconclusive duel between the two.
After the conclusion of the war, Albert Pike went back to his career as a lawyer, relocating to New Orleans for a brief period at the start of 1853. He authored another book, ‘Maxims of the Roman Law and Some of the Ancient French Law, as Expounded and Applied in Doctrine and Jurisprudence’, which was not released but made him a prominent figure among his associates in law.
He went back to Arkansas in 1857 and found further success and fame in the legal field.
He believed that if the South was treated as equal by the North, then the South should remain in the Union. However, if the South was forcefully designated to a lesser status, then it would be better for the South to secede.
In 1861, Albert Pike composed the lyrics of ‘Dixie to Arms!’ At the start of the Civil War, he served as a Confederate envoy to the Native Americans. On November 22, 1861, he was made a brigadier general and put in charge of the Indian Territory.
He helped train three Confederate regiments of Indian cavalry. Most of the recruits from these units were from the “civilized tribes”. Their loyalty towards the Confederacy was not exactly constant. He worked out multiple treaties with the tribes, including the Cherokee and their chief John Ross.
In March 1862, Pike’s unit initially registered a significant victory at the Battle of Pea Ridge (Elkhorn Tavern). However, when the Union forces counterattacked, his men could not maintain order and suffered a drastic defeat.
As with the Mexican-American War, Pike often disputed with his superiors in the Civil War as well. After receiving instructions to assign his men in Arkansas in May 1862, Pike submitted his resignation in protest.
After Pea Ridge, there were allegations that his troops had performed scalping on soldiers in the field. Furthermore, Maj. Gen. Thomas C. Hindman accused him of mismanaging money and material and ordered his arrest.
Both of these charges later turned out to be not having any significant evidence to support them. However, Pike, fearing arrest, fled into the hills of Arkansas. On July 12, 1862, he mailed his resignation from the Confederate States Army. He was eventually apprehended on 3 November. On 11 November, the Confederate command allowed him to resign and go back to Arkansas.
Family & Personal Life
In 1834, Albert Pike exchanged wedding vows with Mary Ann Hamilton. The couple had ten children together: eight sons, Albert Jr, Luther Hamilton, Eustace, Yvon, Clarence, Walter Lacy, Albert Holden, and Benjamin Desha, and daughters Lilian and Isadore.
On April 2, 1891, Pike passed away in Washington, D.C. He was 81 years old at the time. He was laid to rest at Oak Hill Cemetery. The burial was not in accordance with his wishes as he wanted his remains to be cremated. In 1944, his remains were exhumed and reinterred at the House of the Temple, headquarters of the Southern Jurisdiction of the Scottish Rite. 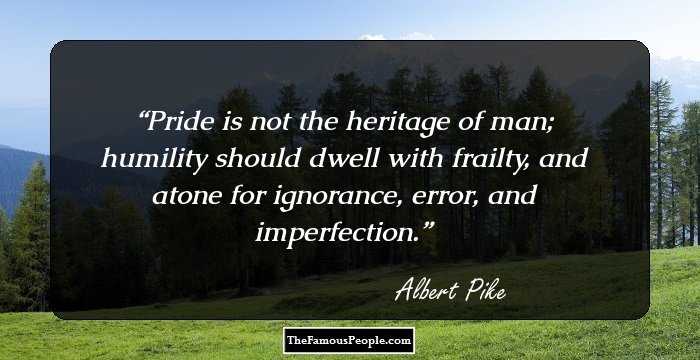 Quotes By Albert Pike | Quote Of The Day | Top 100 Quotes

See the events in life of Albert Pike in Chronological Order