Clarence Thomas is one of the reputed names in the law circle in US. With the stepping down to Thurgood Marshal and appointment of him as the Associate Justice of the Supreme Court of the United States, he became the second African-American to serve the court. Interestingly, Thomas initially intended to become a priest and even enroled himself for priesthood. However, fate had something else in store for him and a string of political events leading to the assassination of martin Luther King Jr led him to re-think his decision. He graduate from yale University with a degree in law and commenced his career in law. Over the years, he held significant posts including an Assistant Attorney General in Missouri, later serving as the legislative assistant to Senator John Danforth and eventually taking up the chair of Assistant Secretary for Civil Rights at the U.S. Department of Education. His most prominent post came in the form of Chairman of the Equal Employment Opportunity Commission (EEOC) before being nominated, confirmed, voted and finally appointed as Associate Justice of the Supreme Court. Considered one of the most conservative members of the Court, his rendition of law has a textual approach that does not go well with fellow judges and people. Read further to know more about his life, career and approach of law. Mike Pence
DID WE MISS SOMEONE?
CLICK HERE AND TELL US
WE'LL MAKE SURE
THEY'RE HERE A.S.A.P
Quick Facts

American People
Lawyers
Black Lawyers
Chief Justices
Black Lawyers & Judges
Childhood & Early Life
Clarence Thomas was the second of the three children born to MC Thomas and Leola Williams. While his father was a farm worker, his mother was a domestic worker.
Young Thomas was only two when his father abandoned the family. The poor earning of his mother coupled with the impoverished state of the family left him with little option but to live with his grandparents.
Influenced by his grandfather, he realized since young the importance of hard work and labour. Upon the insistence of his grandfather, he joined school. He became the only black student in high school in Savannah.
At the age of 16, he turned to priesthood, thus becoming the first black student to attend St. John Vianney's Minor Seminary. Later on, he attended the Conception Seminary College as well.
The turning point in his chosen vocation came after the assassination of martin Luther King Jr. He thought that the church failed to contain and control racism. He then enrolled himself at the College of the Holy Cross
While at the college, he founded the Black Students Union. He was also member of Alpha Sigma Nu and the Purple Key Society. He graduated from the college with an A.B. cum laude in English literature in 1971.
Following a rejection at being drafted into the military due to medical reasons, he enrolled himself at the Yale Law School. He graduated from the same with a Juris Doctor (J.D.) degree in 1974. 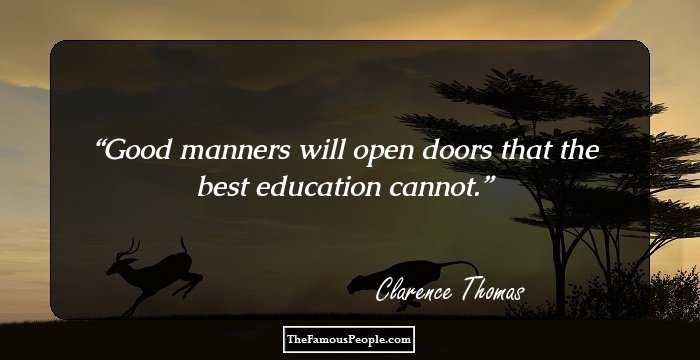 Quotes: Will
Continue Reading Below
Career
Gaining admission at the Missouri bar in 1974, he served as the Assistant Attorney General of Missouri to John Danforth until 1977. He was the only black at the office. Initially, he held the profile of working in the criminal appeals division but later on moved to the revenue and taxation department.
Upon Danforth’s election to the US Senate, he became an attorney with the Monsanto Company in St. Louis, Missouri. However, he did not continue in the profile for long and returned to Washington DC to serve as a Legislative Assistant to Danforth. For two years, from 1979 to 1981, he controlled energy issues for the Senate Commerce Committee.
In 1981, he was signed up by the Reagan administration. He started off by working as an Assistant Secretary of Education for the Office for Civil Rights in the U.S. Department of Education from 1981 to 1982.
In 1982, he chaired the seat of the Chairman of the US Equal Employment Opportunity Commission ("EEOC"), which he held until 1990. During his term as the chairman, he brought about numerous changes, promoting doctrine of self-reliance and acts of individual discrimination.
Meanwhile, in 1989, President George H.W. Bush gave his fist first judgeship by giving him the seat on the United States Court of Appeals for the District of Columbia Circuit. He received his commission on March 6, 1990.
Year 1991 turned eventful for him after the stepping down of Supreme Court judge, Thurgood Marshall. He was subsequently named as one of the nominated replacements for Marshall. Despite receiving low levels on the American Bar Association ratings due to his lack of experience, he was nevertheless appointed acceding to the pressure of the White House and Republican Senators.
Much uproar had occurred ever since his nomination, due to his conservative views against Marshall’s liberal juristic stands. Nonetheless, he was confirmed on September 10, 1991 which was followed by confirmation hearings during which he was alleged of sexual harassment.
He braved all the allegations and was approved by the Senate with a very small margin of 52-48. He was sworn in as an associate justice of the Supreme Court on October 23, 1991.
Ever since his appointment, he has joined hands with the most conservative members, thus adopting an assertive, conservative and consistent approach to constitutional interpretations.
He has openly voiced against expansion of federal guarantees under the Constitution and racial preference programs. He rejected the majority opinion of acceding to the prison inmates the constitution's protection against cruel and unusual punishment.
Personal Life & Legacy
He first tied the nuptial knot with college sweetheart, Kathy Grace Ambush. Together, they were blessed with a child. However, the unison did not last long and the two separated in 1984.
In 1987, he remarried Virginia Lamp, a lobbyist and aide to Republican Congressman Dick Armey
Despite being as a Roman Catholic, he presently attends the Episcopal Church.
Trivia
He is the second African-American to serve as the Associate Justice of the Supreme Court of the United States after Thurgood Marshall.

See the events in life of Clarence Thomas in Chronological Order