Advanced Search
Reinhold Niebuhr was a well known American theologian and intellectual who earned great fame and admiration of the masses. Niebuhr was ordained as a minister in the German Evangelical Synod of North America, following which he pastored the middle class for almost 13 years. After moving to New York, he began an association with New York's Union Theological Seminary, serving as professor of Christian ethics and also as the dean. His association with the seminary was significant that lasted for as long as he was alive. As a philosopher and intellectual, he was neither creating nor defending stringent belief systems. However, he worked on applying the contemporary Christian models to politics and society as a whole. His theological contributions have been described as "Christian realism," and most of his work was peace driven, aiming to reinforce the idea of love in a world witnessing constant conflicts. A man with many talents, Niebuhr was a prolific writer and a popular and engaging lecturer. He gained the status of a national celebrity and influenced Martin Luther King, Jr. and other prominent policy makers in the administration of President John F. Kennedy. Jonathan Edwards
DID WE MISS SOMEONE?
CLICK HERE AND TELL US
WE'LL MAKE SURE
THEY'RE HERE A.S.A.P
Quick Facts

American Celebrities
American Men
Yale University
American Theologians
American Intellectuals & Academics
Childhood & Early Life
Niebuhr was born on June 21, 1892, to German immigrants Gustav Niebuhr and Lydia, in Wright City, Missouri. His father, a German Evangelical pastor paved the way for him and his siblings, in the field of theology.
His brother H. Richard Niebuhr was a theological ethicist and his sister Hulda Niebuhr was a professor of divinity, in Chicago.
After moving with his family to Illinois, Niebuhr’s first experience of the church was as a pastor of St. John’s Church. He served as an interim minister there in 1913, after his father passed away.
He graduated from Elmhurst College, Illinois in 1910 and later studied at Eden Theological Seminary in Webster Groves, Missouri.
In 1914, he received a Bachelor degree in Divinity from Yale Divinity School. The next year, he was awarded his Master of Arts degree from the same school. 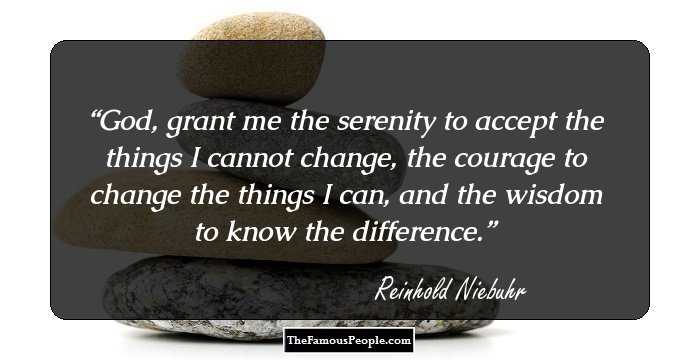 Quotes: Me, God, Change, I
Continue Reading Below
Career
After being ordained as a pastor in 1915, Niebuhr was sent to Detroit by the German Evangelical mission board. After his arrival, the congregation increased to a significant number indicating that he could connect with people outside the German- American community,
During the World War I in 1917, Niebuhr inspired the German Americans to be patriotic to America and his appeals were often published in National magazines, which gained him a lot of popularity.
He served as Executive Secretary of the War Welfare Commission during the war and also maintained his position as the pastor in Detroit.
He deeply criticised Henry Ford and the automobile industry and blamed them for the poor plight of automobile workers.
In 1928, he moved to New York in became dedicated to Marxism. He became a Professor of Practical Theology at Union Theological Seminary, staying here for the rest of his career and finally retired in 1960.
He became an important and famous leader of the militant section of the Socialist Party of America. In 1941, he co-founded of the Union for Democratic Action and served as its president for the next six years. The group strongly advocated militarily interventionist, internationalist foreign policy and a pro-union, liberal domestic policy. In 1947, Union for Democratic Action transformed into the Americans for Democratic Action.
He is the author of the ‘Serenity Prayer’ which he often cited orally during his speeches. The prayer was first published in the written form in 1943 when he included it in a sermon.
From 1941 to 1966, he was the editor of the magazine, ‘Christianity and Crisis’. He published several books throughout his career like ‘Leaves from the Notebook of a Tamed Cynic’ and ‘Moral Man and Immoral Society’.
In 1952, he published ‘The Irony of American History’, in which he interpreted the meaning of the United States’ past.
Continue Reading Below 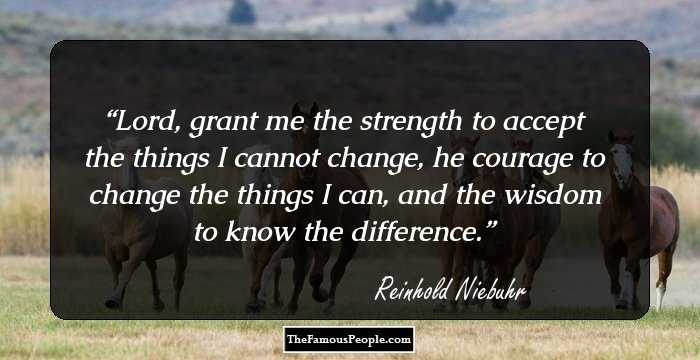 Quotes: Me, Change, I
Major Works
His books ‘Moral Man and Immoral Society’ and ‘The Nature and Destiny of Man’ were his most prominent works which still influence and inspire politicians and leaders all around the world.
The Serenity Prayer which he wrote is a very famous prayer adopted by the Alcoholics Anonymous and is also used by other twelve-step programs. A modified form of the original prayer is the more popular version in contemporary scenario.
Awards & Achievements
Niebuhr received the ‘Presidential Medal of Freedom’ from President Lyndon Johnson in the year 1964. 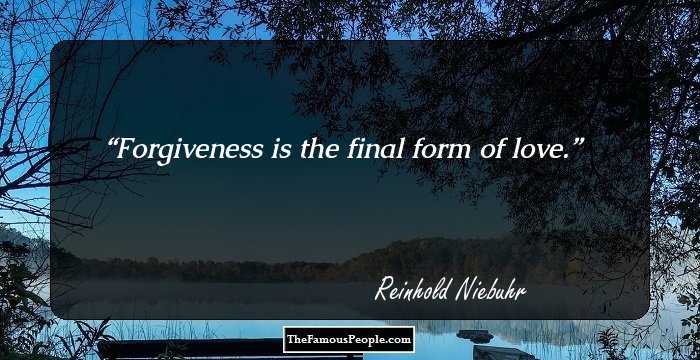 Quotes: Love
Personal Life & Legacy
In 1931, Niebuhr married Ursula Keppel-Compton who was a Church member and studied theology and history at Oxford University.
The couple had two children, a son named Christopher and a daughter named Elisabeth.
Niebuhr died on June 1, 1971, in Stockbridge, Massachusetts, at the age of 78.
The West 120th Street in New York was named the Reinhold Niebuhr Place honouring his teaching years at the Union Theological Seminary located on the same street.

Quotes By Reinhold Niebuhr | Quote Of The Day | Top 100 Quotes

See the events in life of Reinhold Niebuhr in Chronological Order 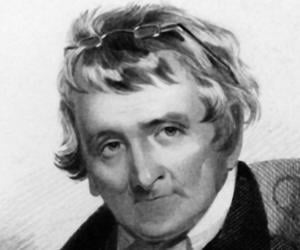