Advanced Search
William Morris was one of the most influential Pre-Raphaelite artists, textile designer and writer of his time during the English Arts and Crafts Movement. As an author and medievalist, he helped establish the modern fantasy genre that has gone to inspire contemporary authors of today including J.R.R. Tolkien and J.K. Rowling. Some of his notable works include ‘News from Nowhere’ and ‘The Well at the World’s End’. He also contributed in refreshing traditional fabric arts and methods of production. One of the founders of the Society for Protection of Ancient Buildings, Morris’s name has gone down in history as the iconic figure who changed the face of ancient buildings conservation in the United Kingdom. Some of his best-written works include ‘A Dream of John Ball’, and ‘The Earthly Paradise’. He was an important figure in the advent of socialism in Britain, founding the Socialist League, but leaving the organization due to differences in goals and means. He devoted much of his later life to the Kelmscott Press, which was involved in the production of illuminated-style print books. Image Credit
https://www.youtube.com/watch?v=QiNFoJqOJhs
(The School of Life)
Previous   Next

Lady Colin Camp...
24th March In History
DID WE MISS SOMEONE?
CLICK HERE AND TELL US
WE'LL MAKE SURE
THEY'RE HERE A.S.A.P
Quick Facts

British People
Non-Fiction Writers
British Men
The University of Oxford
Aries Poets
Childhood & Early Life
William Morris was born on March 24, 1834, in Waltamstow, England, to William Morris and Emma Morris Shelton. He was the third child of his parents, but his earlier two siblings had died in infancy, hence effectively he was the eldest child in the family.
He was an extremely studious child and learned to read from a very early age. By the age of four, he was a child prodigy and had already read most of the Waverly novels.
He was particularly influenced by ‘Arabian Nights’ stories and by the designs in ‘Gerard’s Herbal’. By the time he was 13 years old, his father died; he left behind a wealthy legacy.
In 1848, the family relocated and soon, Morris attended Marlborough College, where he studied for three years. He never showed much interest in academics here and developed a taste only for architecture. He was eventually removed from this school.
He was sent to be tutored by Rev. F. B. Guy, who prepared him for Exeter College, Oxford; an institution he attended in 1852. Here, he studied theology, ecclesiastical history, medieval poetry and art, along with his friend, Edward Burne-Jones.
It was during his time in college that he became heavily influenced by Pre-Raphaelite paintings and he also began to write poetry. Despite his creative pursuits, he decided to become an architect. 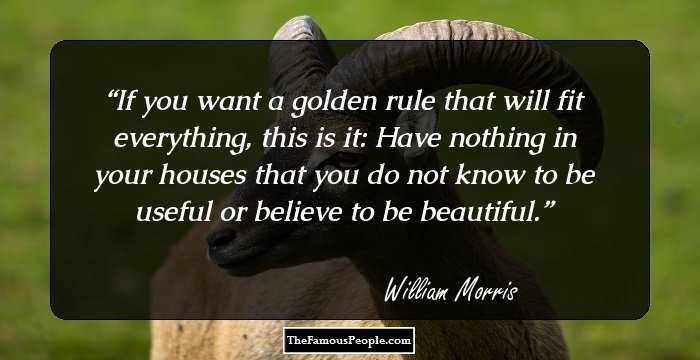 Quotes: You, Will, Beautiful, Believe
Continue Reading Below
Career
After passing his exams, he interned as a pupil at the office of George Edmund Street, a leading architect. It was there that he became lifelong friends with the senior clerk, Philipp Webb.
However, during the course of his time, he also took up art and devoted himself to working for an art commission; one which involved him to decorate a roof, depicting one of the scenes from ‘Le Morte D’Arthur’, along with several other artists.
Following his marriage, he concentrated on building a house for his wife and himself.
In 1861, he built an organization with other artists called ‘Morris, Marshall, Faulkner & Co’. The firm would assume carving, stained glass works, paper-hangings, carpets, metal-works, embroideries, tapestries and printed fabrics works.
After his marriage, he gradually began to lose interest in painting the last of his paintings are dated no longer than 1862. The same year, the works done by the firm was showcased at the 1862 International Exhibition, and within four years of this exhibit, the company began making huge profits.
In 1867, he was ordered to decorate a ‘green dining room’ at the South Kensington Museum. The works included stained glass windows, panel figures, olive branches and a frieze.
In 1874, Morris wanted to take sole control of the firm and had to acquire the other shareholders in the process. Around this time, he started to take an active interest in politics and soon, became a member of the ‘National Liberal League’.
In 1876, he composed one of his greatest poems, which was of 10,000 lines titled, ‘The Story of Sigurd the Volsung and the Fall of the Niblungs’.
Apart from writing and designing, Morris was extremely fond of medieval tapestries. In 1879, he finished his first tapestry solo works titled, ‘Cabbage and Vine’.
Continue Reading Below
In 1882, he authored ‘Hopes and Fears of Art’. By the next year, he was made a member of the Democratic Federation and during the course of this time his creative energies grew manifold, influenced by socialist politics. It was during this time he read Marx’s ‘Das Kapital’, which greatly influenced his ideologies.
By 1884, he was actively advocating and writing on socialism and lecturing at street corners in England and Scotland. The same year, he authored ‘Art and Socialism’ and ‘A Summary of the Principles of Socialism’. He grew to become weary of the Democratic Federation and resigned from the group, establishing the ‘Socialist League’.
In 1885, he authored ‘Useful Work versus Useless Toil’ and ‘Chants for Socialists’. He also edited the Socialist League’s journal, ‘Commonweal’ and was detained in association with ‘free speech demonstration’.
He published a series of lectures titled, ‘Signs of Change’, in 1888. In the same year, he wrote ‘The House of the Wolfings’—which was his first work in the ‘prose-romance’ category—and he also authored ‘A Dream of John Ball’.
In 1889, he left the Socialist League and founded the ‘Hammersmith Socialist Society’ along with his disciples and two years later, he founded the ‘Kelmscott Press’ at Hammersmith.
In 1891, he authored a fantasy novel, ‘The Story of the Glittering Plain’, published by Kelmscott Press.
In 1894, he published ‘The Wood Beyond the World’, a prose fantasy, which is regarded as one of his finest works till date.
His last works include’ Child Christopher and Goldilind the Fair’, ‘The Sundering Flood’ and ‘The Well at the World’s End’. 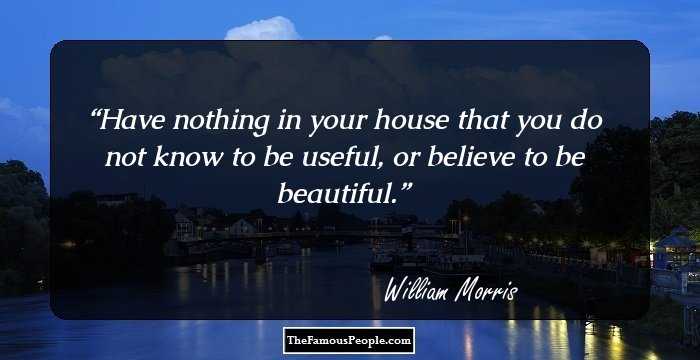 Quotes: You, Home, Beautiful, Believe
Continue Reading Below
Major Works
In 1876, he penned a 10,000 line poem titled, ‘The Story of Sigurd the Volsung and the Fall of the Niblungs’. The poem was heartily received by critics and eminent personalities including George Bernard Shaw and T.E. Lawrence. Although it never received wide readership, it is largely considered one of his greatest works and has gone on to inspire fantasy writers of today including J.R.R. Tolkien and Kevin Crossley-Holland.
‘The Wood Beyond the World’, published by Kelmscott Press in 1894 is regarded as one of the greatest works in ‘fantasy literature’. The novel was reissued by Ballantine Adult Fantasy Series and is believed to be one of the few works that has gone on to inspire modern-day fantasy novels.
Personal Life & Legacy
He fell in love with Jane Burden and married her on April 26, 1858. They went on to have two daughters, one of whom developed epilepsy during her teens. His wife also had a long affair with Morris’ friend, Dante Gabriel Rossetti.
Both Jane and Morris were extremely happy together for the first 10 years of their marriage, but since a divorce was inconceivable at the time, they lived together until his death.
He died on October 3, 1896, at the age of 62, in London.
A number of galleries and museums house important collections of Morris’s work including The ‘Art Gallery of South Australia’, which holds a number of his furnishings and art works. Other galleries include, ‘The Huntington Library, Art Collections and Botanical Gardens’, located in California.
A monument called the 'Morris Fountain’ is located in the Bexleyheath town center. There is also a hall of residence named in his honor at the Loughborough University. 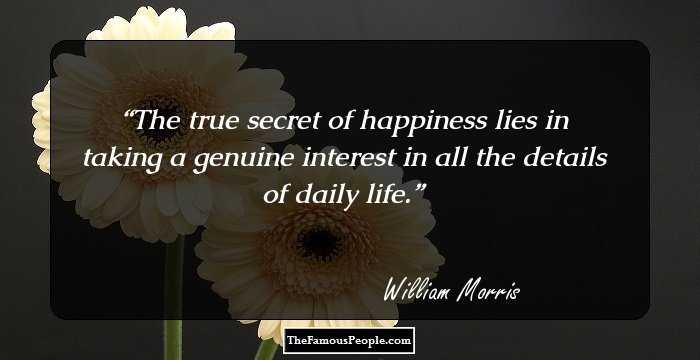 Quotes: Life, Happiness
Trivia
After the death of Tennyson, this famous textile designer, architect, poet and writer was offered poet laureateship, but he declined this prestigious offer.

Quotes By William Morris | Quote Of The Day | Top 100 Quotes

See the events in life of William Morris in Chronological Order