Mrs Beeton was an English author who penned the famous book, ‘Mrs Beeton’s Book on Household Management’. Browse through this biography to know in details about her childhood, life, career, works, and timeline Phillip Schofield
Isabella Beeton was one of the most recognized names in the British history of cookery book writers. Universally known as Mrs Beeton, she authored the most famous English book, ‘Mrs Beeton’s Book on Household Management’. Just as the name says, the book serves as a guide in providing tips and advice on all the aspects of household management in the Victorian Era. Right after its launch, the book met with instant success and became an immediate bestseller, selling more than two million copies within a couple of years. The book was intended as a guide of reliable information for the aspirant and ever-expanding Victorian middle classes. It dealt with a huge plethora of topics right from advice on household management to tips on childcare, etiquette, entertainment, employment of servants, laundry works and so on. What’s more, it had an extensive section on cookery that provided easy-to-make recipes, their ingredients, cooking time, cooking procedure and so on. Most of the recipes were illustrated with coloured engravings. It was the first cookbook to pen recipes in the format that is still practiced today. Interestingly, much of her expertise in the subject came from her experience in babysitting and household management when she was young, with a huge family comprising of 20 siblings. Pisces Writers
Women Writers
British Writers
British Women Writers
Childhood & Early Life
Mrs Beeton was born as Isabella Mary Mayson on March 12, 1836, in Cheapside, London to Benjamin Mayson and Elizabeth Jerram.
When Isabella was extremely young, her father died. As such, her mother remarried a widower, Henry Dorling, who had four children from his previous marriage. The family lived in Epsom, Surrey.
Young Isabella was well educated for the women of her times. In 1851, she was sent to Heidelberg, Germany to study music and languages. While in Germany, she mastered playing the piano. She returned to Epsom after two years.
Upon returning home from Germany, Isabella, the eldest of the 20 siblings, took over the responsibility of babysitting and general management of her house. During this time she developed a knack for household management that gave her the required experience and expertise. 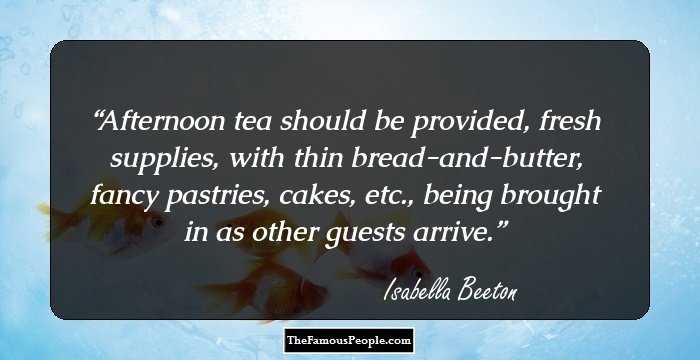 Women Non-Fiction Writers
British Non-Fiction Writers
British Women Non-Fiction Writers
Pisces Women
Career
Following her marriage to publisher Samuel Orchart Beeton, sabelle commenced her career as a writer and author. In the initial days, she started off by contributing articles on cookery and household tips, guides and management in her husband’s publications.
In 1859, she commenced writing a monthly supplement to ‘The Englishwoman’s Domestic Magazine’. She penned articles on useful household tips, cookery items, childcare instructions and so on.
Following the success of ‘The Englishwoman’s Domestic Magazine’, Samuel started an only-for-men magazine, ‘The Boy’s Own Magazine’. With assistance from Isabella, he soon expanded his publishing business, printing Christmas annuals, dictionaries and guides.
Amalgamating the supplements for ‘The Englishwoman’s Domestic Magazine’, she came up with a full-fledged book, ‘Mrs Beeton’s Book of Household Management’. The book adhered to the needs of the rapidly expanding middle class families of the Victorian era by aiding them with much-needed household tips.
‘Mrs Beeton's Book of Household Management’ catered to a wide range of subjects and had important tips for all including Mistress, Cook, Kitchen-maid, Butler, Footman, Coachman, Valet, Upper and Under-Housemaids, Lady's-Maid, Maid-of-all-work, Laundry Maid, Nurse and Nurse-maid, Monthly Wet and Sick Nurses. Furthermore, it contained information on topics such as Sanitary, Medical, & Legal Memoranda as well.
Expanding over 1112 pages, ‘Mrs Beeton's Book of Household Management’ not just provided tips, advice and guidelines on running a Victorian household but contained a cookery section that provided some easy-to-follow recipes, their ingredients, prices, weights and their cooking times. With more than 900 recipes illustrated with coloured engravings, the book was popularly referred to as Mrs Beeton's Cookbook.
In 1858, she opened a soup kitchen in her home for the poor children of the area. In her small way, she helped fight the hard winter conditions by helping the children gulp down deliciously hot soups.
In 1861, Samuel Beeton founded ‘The Queen’, the ladies' newspaper. It was a weekly magazine for ladies that gave a first-hand glimpse of high society with details on London’s social events. Furthermore, it gave advice on ladies-oriented occupations, literature and amusements. Isabella visited Paris to establish a French connection for the magazine, thus providing readers with latest inputs about Paris’ fashions. 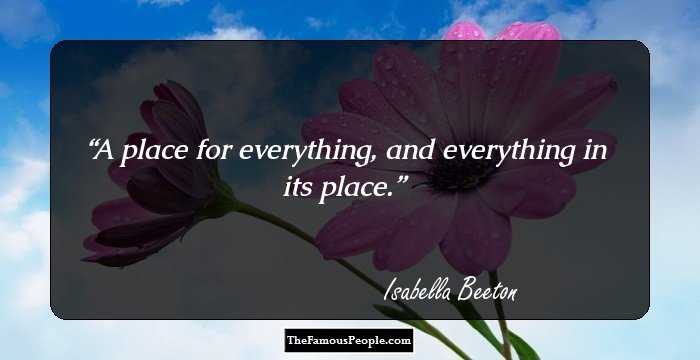 Major Work
She is known for her book, ‘Mrs Beeton's Book of Household Management’. The nook catered to a wide range of subjects and had important tips for all including Mistresses, Cooks, Kitchen-maids, Butlesr, Footmen, Coachmen, Valets, Upper and Under-Housemaids, Lady's-Maid, Maid-of-all-work, Laundry Maid, Nurse and Nurse-maid, Monthly Wet and Sick Nurses. Furthermore, it contained information on topics such as Sanitary, Medical, & Legal Memoranda as well.
Personal Life & Legacy
Isabella first met Samuel Orchart Beeton while on a visit to London. Samuel Beeton was a publisher of books and popular magazines. The two tied the knot on July 10, 1856 at St Martin's Parish Church, Epsom.
After marriage, the couple shifted base to Chandos Villas on the Woodridings Estate in Hatch End. They were blessed with four sons, of which the first two died at three months and three years respectively.
Orchart Beeton and Mayson Moss, their third and fourth sons, went on to have successful life. While Orchart served in the army, Mayson started off as a publisher and later became a journalist. He became the founder and president of Anglo Newfoundland Development Company, a paper mill that provided the paper to the Daily Mail even during the peak wartime.
Immediately after Mayson’s birth, Isabella developed peritonitis and puerperal fever. She passed away on February 6, 1865, at merely 28 years of age.
In 2006, BBC broadcast a biographical -drama, ‘The Secret Life of Mrs Beeton’. It had Anna Madeley in the title role. The drama gave viewers first-hand information on Beeton’s early life, her youth days, her books and her early death. 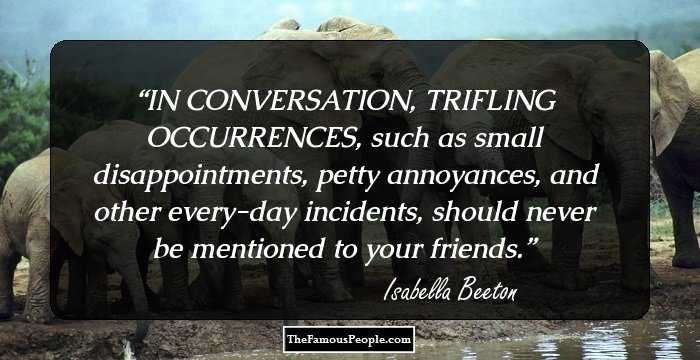 Quotes: Never, Friends
Trivia
She is often remembered as the compiler and editor of ‘Mrs Beeton’s Book of Household Management’ because many of the information provided in the book are actually works of other writers and authors. However, Beetons’ never claimed the book to have original content
You May Like

See the events in life of Isabella Beeton in Chronological Order