(One of the Most Famous and Influential Artists of All Time)

Vincent van Gogh was a legendary Dutch artist whose works are known for their charismatic beauty, enthralling emotion and vibrant colors. Considered to be the greatest Dutch painter after Rembrandt, he is seen as one of the most recognizable painters in history. However, unluckily for van Gogh, much of the appreciation and glory came posthumously as he spent a life ridden by poverty, unstable mental health and poor physical state. Van Gogh had a modest start in his life as he struggled for direction. He spent much of his adult life on an unrelenting pilgrimage tour, painting, sketching and preaching the word of God. It was in Paris that he resumed to his old love and passion of art by studying the works of new impressionist painters, and later imitating their works. However, he later developed his own unconventional style that was bold and unflinching. Over his life, he completed more than 2,100 works, consisting of 860 oil paintings and more than 1,300 watercolors, drawings and sketches. Today, several of his paintings rank among the most expensive in the world. William-Adolphe...
30th March In History
DID WE MISS SOMEONE?
CLICK HERE AND TELL US
WE'LL MAKE SURE
THEY'RE HERE A.S.A.P
Quick Facts

Dutch People
Dutch Artists & Painters
Aries Artists & Painters
Male Artists & Painters
Aries Men
Childhood & Early Life
Vincent Willem van Gogh was born on 30 March 1953 as the eldest of the six children of Theodorus van Gogh and Anna Cornelia Carbentus. His father was a minister of the Dutch Reformed Church.
Art and religion as occupation came naturally to the van Gogh family and young Vincent was drawn to drawing since an early age which led him to take up the same as his occupation
Raised in a Catholic area, he attended the Zundert village school, wherein he was taught by a Catholic teacher. For three years from 1861 to 1864, he was home trained by a governess.
Later on, he attended the Jan Provily's boarding school at Zevenbergen, post which he gained admission at Willem II College. he left school in March 1868 to return home. 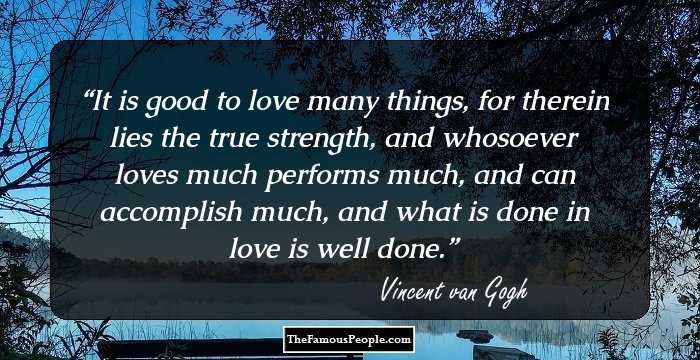 Quotes: Love
Continue Reading Below
Career
With the help of his Uncle Cent, he gained a position with an art dealer Goupil & Cie in The Hague. Finishing his training, he was transferred to London in June 1873 where he put up at Brixton and worked at Messrs. Goupil & Co.
His years in London were the most productive years of his early art career. He was happy with his work and the advances of his romantic life. His earnings were also constantly on the rise to the point of surpassing his father’s income.
The good phase did not last long as he faced a period of crisis in his personal life which affected his work. He was yet again transferred to Paris but his work did not bloom in the artistic city where he thought that art was seen more as a commodity than expression of emotions. His period of service with Goupil ended on April 1876.
Returning to England, he spent some time working as an unpaid teacher in a small boarding school in Ramsgate. However, when the school shifted base to Middlesex, he relieved himself off the duties to take up the position of a Methodist minister’s assistant.
During Christmas, he returned home and started working in a bookshop in Dordrecht. However, the work did not interest him much as he spent much of his time doodling.
At the time of working in the bookshop, he experienced religious zeal and found his true vocation. To become a vicar, he moved to Amsterdam to study theology. However, his efforts did not reap results as he failed both in the entrance exam and the three-month course at the Vlaamsche Opleidingsschool, a Protestant missionary school
Following the setback, he took up a temporary post of a missionary in the village of Petit Wasmes in 1879. He changed his lifestyle completely, practicing what he preached. He started sleeping on straw and lived a squalid lifestyle.
After being rebuffed by the Christian authorities for undermining the dignity of priesthood by living in squalid conditions, he returned home and stayed there for almost a year; a fact which became a matter of concern for his parents. He then returned to Cuesmes and stayed with Charles Decrucq
Following the advice of Dutch artist Willem Roelofs, he attended the Academie Royale des Beaux-Arts in Brussels, where he studied anatomy and standard rules of modelling and perspective. He aspired to become an artist in God’s service.
Continue Reading Below
Initially based in The Hague, he left the place and relocated to Drenthe where he stayed for about six weeks. He spent much of his time living a nomadic life, moving all through the region, painting landscapes and caricature of artists.
In 1885, he started working on what became his magnum opus or his first masterpiece, ‘The Potato Eaters’. The work was first exhibited in the window of the paint dealer Leurs in The Hague.
He then moved to Paris where impressionism became a dominant art form. He too, was inspired by the same and began studying with Henri de Toulouse-Lautrec, Pissarro and others.
He soon became interested in Japanese art and began studying eastern philosophy in detail, which he believed would assist him in coming up with authentic drawing.
In early 1888, he moved to the South of France. Much of his paintings of this time were based on the local landscapes and light and had predominant use of yellow, ultramarine and mauve.
He came up with a series of paintings such as ‘Van Gogh's Chair’, ‘Bedroom in Arles’, ‘The Night Cafe’, ‘Cafe Terrace at Night’, ‘Starry Night Over the Rhone’, ‘Still Life: Vase with Twelve Sunflowers’.
During this time, he spent much of his money on paint rather than food. Resultantly, his physical and psychological condition worsened and he became mentally challenged. Worried about his health, his brother offered Paul Gauguin money to visit his brother and watch over him.
Gauguin and van Gogh started painting together. While van Gogh painted Gauguin’s ideas and his painting The Red Vineyard, Gauguin painted his portrait of ‘The Painters of Sunflower’.
The cordial relationship between the two was affected as they often indulged in fierce quarrel. While Gauguin was arrogant and dominating, van Gogh on the other hand wished to be treated as Gauguin’s equal. The heated arguments led him to cut off his left ear and pass it to a prostitute in a brothel he frequently visited.
Continue Reading Below
He was then hospitalized but recovered speedily. However, his psychological health declined steadily as he suffered from hallucinations and delusions. He turned to painting but could not find peace with his work and thus was shifted back to the hospital. He spent the day painting at the Yellow House and returned to the hospital at night.
He finally moved to an asylum in Saint-Remy-de-Provence. During his stay, he began painting the clinic and hospital garden which became the main subject of his drawings. He came up with several masterpieces including, ‘The Starry Night’, ‘Olive Trees with the Alpilles in the Background’, ‘Cypresses’, ‘Cornfield with Cypresses’ and ‘Country road in Provence by Night’.
Other works of this time include two version of ‘Bedroo in Arles’, five versions of ‘L'Arlesienne’, ‘Two Peasant Women Digging in a Snow-Covered Field at Sunset’ and ‘Sorrowing Old Man ('At Eternity's Gate')’.
In 1890, he left the clinic in Saint-Remy to move near the physician Dr. Paul Gachet in Auvers-sur-Oise. During this time, he painted several paintings such as ‘Portrait of Dr Gachet’, ‘The Church at Auvers’, ‘Wheat Field with Crows’ and two paintings of ‘Daubigny's Garden’ 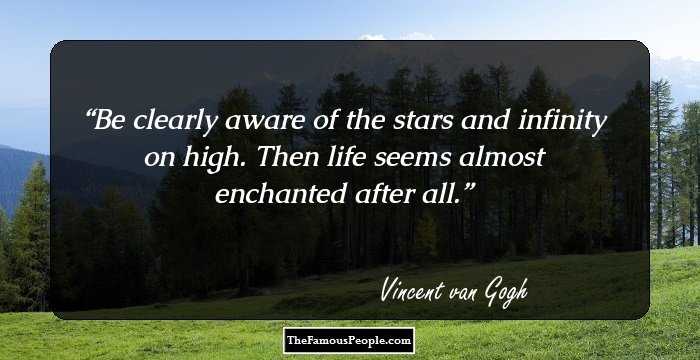 Quotes: Life
Personal Life & Legacy
He experienced three failed romantic relationships in his life, namely with Eugenie Loyer, Kee Vos Stricker and Clasina Maria Hoornik. However, none of the women accepted his love for them.
On 27 July 1890, he shot himself on the chest. Luckily the shot did not cost him his life but an untreated wound resulted in his death 29 hours after he shot himself. He was buried on July 30 in the municipal cemetery of Auvers-sur-Oise.
His funeral was attended by Theo van Gogh, Andries Bonger, Charles Laval, Lucien Pissarro, Emile Bernard, Julien Tanguy and Dr. Gachet amongst 20 other family members and friends.
Posthumously, his paintings were displayed at various exhibitions in Paris, Amsterdam, Cologne, Berlin and New York. They were greatly appreciated and led to a subsequent rise in his fame.
Trivia
This well-known and renowned Dutch painter after having been physically and psychologically unstable cut off his ear and offered it to a prostitute. 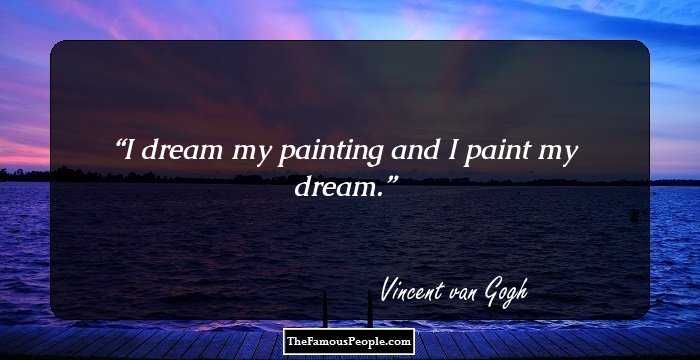