Thomas Hardy was an English author, novelist and poet, who is mainly known for his contribution in the naturalist movement. Though he always regarded himself as a poet and claimed poems as his first love, they are not as popular as novels composed by him. Hardy's huge popularity lies in the large volume of work, together known as the Wessex stories. These novels, plotted in a semi-fictional place, Wessex outline the lives of people struggling against their passion and the adverse conditions. Most of his works reflect his stoical glumness and sense of cataclysm in human life. As both poet and author, Hardy displayed his mastery in dealing with themes of disappointment in love and life, human suffering and all-powering fate. Most of his works are set in the milieu of social tragedy, injustice and evil laws and often have a fatalistic end, with many of the characters falling prey to the unanticipated conditions. Among his most important works are novels Far from the Madding Crowd, The Return of the Native Wessex Tales and A Pair of Blue Eyes. Robert Greene
2nd June In History
DID WE MISS SOMEONE?
CLICK HERE AND TELL US
WE'LL MAKE SURE
THEY'RE HERE A.S.A.P
Quick Facts

British Celebrities
Novelists
British Men
King's College London
Male Poets
Childhood & Early Life
Thomas Hardy was born on June 2, 1840, in Higher Bockhampton, Dorset, England, to Thomas and Jemima Hardy. His father worked as a stonemason and local builder while his mother was a homemaker.
Young Hardy was educated by his mother until he was eight years old. He then gained admission at Mr. Last's Academy for Young Gentlemen where he learned Latin. Though he showed great potential academically, the family’s lack of financial means led to the end of his studies at the age of sixteen. 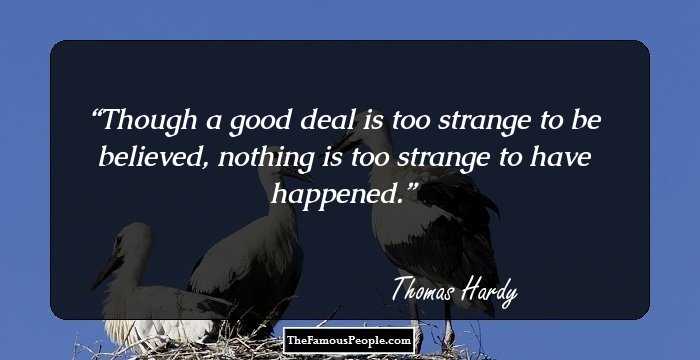 Continue Reading Below
Career
Following his education, Thomas Hardy apprenticed under James Hicks, a local architect. In 1862, he moved to London where he enrolled at King’s College.Simultaneously, he joined Arthur Blomfield's practice as assistant architect.
Under Blomfield, he worked on All Saints' parish church in Windsor, Berkshire,from 1862 to 1864. During this timehe also won several prizes from the Royal Institute of British Architects and the Architectural Association.
Hardy was never at peace in London, well aware of the class division prevalent in the London society. It was while working as an assistant architect that he became interested in social reform.
After spending about five years in London, he returned to Dorset in 1867. He turned to his passion for writing, not forsaking architectural work completely. Hardy penned his first novel, ‘The Poor Man and the Lady’the same year. The book failed to find a publisher as it was politically controversial. It was never published.
Abandoning his first novel, he then penned two more novels, ‘Desperate Remedies’ in 1871 and ‘Under the Greenwood Tree’ in 1872. Both the books were published anonymously.
In 1873, he came up with his fourth book, ‘A Pair of Blue Eyes’ that was based on his courtship with his would-be wife. It was the first book published under his name.
In 1874, Thomas Hardy came up with ‘Far from the Madding Crowd.’ The book first introduced the name ‘Wessex’ to the region located in the west of England. The book was immensely successful. It distinctively weaved humour, melodrama, and tragedy in its story. Following this success,he gave up architectural work completely to pursue a literary career.
During the latter half of the 1870s, Hardy moved from London to Yeovil and laterto Sturminster Newton, where he came up with his novel, ‘The Return of the Native’ in 1878. Four years later, he penned a romantic novel, ‘Two on a Tower.’
In 1885, Hardy moved to Max Gate, a house outside Dorchester. It was designed by Hardy himself and built by his brother. Here, he penned three more novels: ‘The Mayor of Casterbridge’ in 1886, ‘The Woodlanders ’in 1887, and ‘Tess of the d'Urbervilles’ in 1891. ‘Tess of the d’ubervilles’ was widely criticized and initially was even refused publication for it portrayed the story of a fallen woman.
Continue Reading Below
The year 1895 saw the publication of his novel, ‘Jude the Obscure.’ The book met with strong criticism from the Victorian public for its controversial treatment of sex, religion and marriage. His failed marriage added more to the controversy as the book started being regarded as autobiographical.
Following the critical reception met by ‘Tess of the d’Ubervilles’ and ‘Jude the Obscure’, Hardy gave up on writing novels. His 1892 written work ‘The Well-Beloved’ was published in 1897. It was his last novel to be published before he turned to writing poetry.
In 1898, Thomas Hardy published his first volume of poetry, ‘Wessex Poems.’ It was a collection of poems that he had written over a period of 30 years.
From the beginning of the 20th century, Hardy wrote poetry only. He penned in all poetic forms including lyrics, ballad, satire, dramatic monologue and dialogue. Between 1904 and 1908, Hardy published a three-volume epic closet drama ‘The Dynasts.’
As a poet, he had a combination of traditional conventionality and contemporary modernity. He was influenced by folk songs and ballads but never stuck to a typical poetic form. Instead, Hardy experimented with different forms, sometimes inventing stanza forms and metres. He even made use of rough-hewn rhythms and colloquial diction. Irony and satire formed an important element in Hardy’s poetry.
He penned several war poems based on the Boer Wars and World War I, some of which include ‘Drummer Hodge’, ‘In Time of The Breaking of Nations’ and ‘The Man He Killed.’Interestingly, Hardy styled the poems from the viewpoint of ordinary soldiers and their colloquial speech.
In 1914, he published ‘Satires of Circumstance’. In it, he included ‘Poems of 1912-13’ which expressed his regret and remorse at being estranged from his wife Emma for twenty years.
Satires of Circumstance’ included some of the most famous poems by Thomas Hardy that took him to the greatest heights of his poetic career. ‘After a Journey’ and ‘The Voice’ were some of the finest English poems written that described death as a journey rather than a destination. Interestingly, though Hardy’s poetry was a reflection of his unsatisfactory personal life, he always presented his work in a controlled manner.
In 1917, he penned a fifth volume of verse titled, ‘Moments of Vision’ wherein he briefly wrote about his life. The work was meant for posthumous publication under the name of his second wife.
Continue Reading Below
Later, Hardy published two more poetry collections, ‘Late Lyrics and Earlier’ in 1923 and ‘Human Shows’ in 1925. The 1928 work, ‘Winter Words’ that was published posthumously was compiled by Hardy before his death. 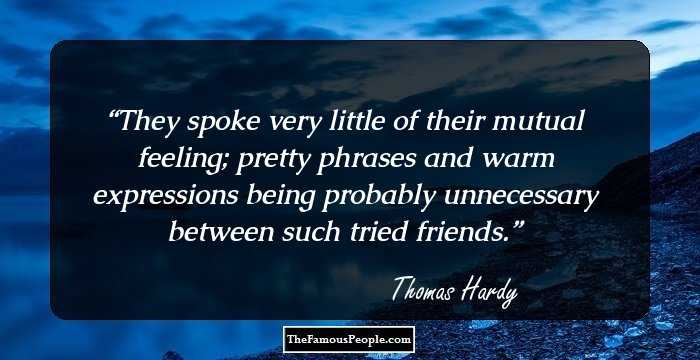 Quotes: Friends
Major Works
Though Thomas Hardy began his literary career in 1867, his best work came in 1874 with the novel ‘Far from the Madding Crowd.’Though his last two novels, ‘Tess of the d'Urbervilles’ and ‘Jude the Obscure’, received negative criticism at the time of their publication, they are today counted amongst his finest novels.
From 1898, Hardy began his tryst with publishing poetry. His poetry collection, ‘Satires of Circumstance’ included some of his most famous poems such as ‘After a Journey’ and ‘The Voice’ that took him to the greatest heights of his poetic career. Till date, they are considered as some of the finest English poems ever written on the theme of death.
Awards & Achievements
In 1910, Thomas Hardy was awarded the Order of Merit. The same year, he was also nominated for the first time for the Nobel Prize in Literature. He was nominated for the Nobel Prize eleven more times. 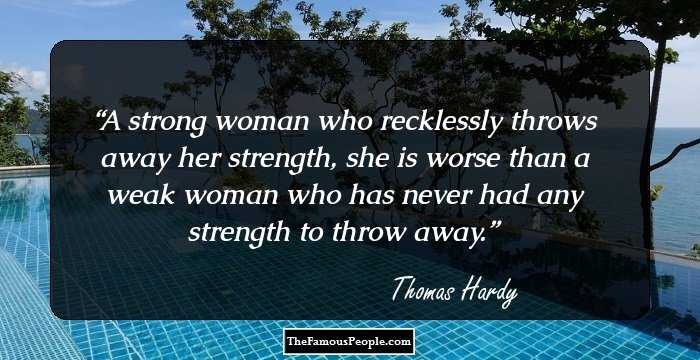 Quotes: Never
Personal Life & Legacy
In 1870, while on an architectural mission to restore the parish church of St Juliot in Cornwall that Thomas Hardy met Emma Lavinia Gifford, sister-in-law of the rector. A vivacious girl, she instantly caught the attention of Hardy who fell in love with her. In 1874, after a long courtship, the duo married in Kensington.
In 1885, Thomas and Emma moved to Max Gate. Early on, she assisted him in his literary endeavours but later on the couple separated. Despite being estranged for more than twenty years, Emma’s death in 1912 caused a deep traumatic effect on Hardy’s mind.
Two years after Emma’s death, Hardy married his secretary, Florence Emily Dugdale, in 1914. She was 39 years his junior. However, he never fully recovered from the death of his first wife and continued to proclaim his devotion to her through his works.
Thomas Hardy breathed his last on January 11, 1928 in Dorchester, England. His remains were interred with national pomp in Westminster Abbey.

Quotes By Thomas Hardy | Quote Of The Day | Top 100 Quotes

See the events in life of Thomas Hardy in Chronological Order