Kazuo Ishiguro is a Japanese-born British novelist who won the Nobel Prize in Literature in 2017. He has been nominated for the 'Booker Prize' multiple times, winning it for 'The Remains of the Day' in 1989. He was only five when his parents moved to England, but had vivid images of an imaginary Japan around which he often builds his stories. His parents also took the responsibility of making young Kazuo aware of his Japanese roots. While he has little familiarity with Japanese fiction, he was slightly influenced by the writings of Jun'ichirō Tanizaki, and to a greater extent by films by Yasujirō Ozu and Mikio Naruse. Most of his novels are set in the backdrop of World War II, and are marked by his almost lyrical description of regret fused with optimism. All his novels, except 'The Buried Giant', are narrated in the first-person style, and his protagonists often exhibit human failings. He has been very vocal about the political turmoil in the recent times, expressing his fears for Britain after Brexit, and in his Noble acceptance speech, he said that he hopes to create a "positive atmosphere at a very uncertain time" through his works. Helmerich Award
Fellow of the Royal Society of Arts

British People
Short Story Writers
British Men
University Of East Anglia
Male Writers
Childhood & Early Life
Kazuo Ishiguro was born on November 8, 1954 in Nagasaki, Japan, to Shizuo Ishiguro and his wife Shizuko. He has an older sister, Fumiko, and a younger sister, Yoko.
His father, who was a physical oceanographer, moved to Guildford, Surrey, in order to begin a two-year research project at the National Institute of Oceanography. When Kazuo Ishiguro was 15, his father turned down a post at a Tokyo university to stay in England, following which Kazuo Ishiguro formally became a British citizen in 1983.
He initially attended Stoughton Primary School and then got into Woking County Grammar School in Surrey. After finishing his school education in 1973, he travelled through the United States and Canada, and acted as a grouse beater for the Queen Mother in Balmoral.
In 1978, he completed his graduation from Kent University with a bachelor's degree in English and Philosophy. Two years later, he got his master's degree in Creative Writing from the University of East Anglia, where Malcolm Bradbury and Angela Carter were his classmates. 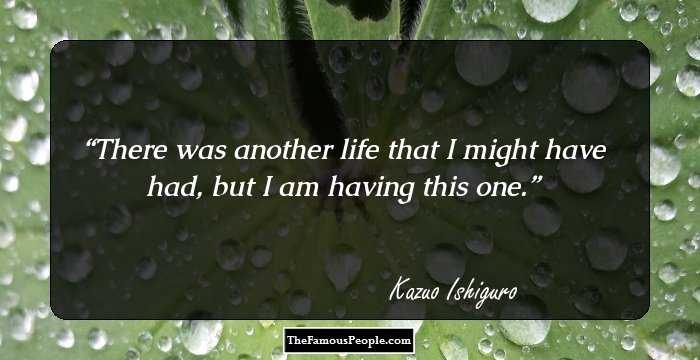 The Most Popular US Veterans
Literary Career
Three of Kazuo Ishiguro’s short stories, ‘A Strange and Sometimes Sadness’, ‘Waiting for J’ and ‘Getting Poisoned’, were included in ‘Introduction 7: Stories by New Writers’ in 1981.
In 1982, he published his thesis as his first novel, 'A Pale View of Hills’. The story of Etsuko, a Japanese widow in England, who is trying to cope with her daughter's suicide, earned him the ‘Winifred Holtby Memorial Prize’ in 1982.
In 1983, he published two short stories, 'A Family Supper' in 'Firebird 2: Writing Today' and 'The Summer After the War' in 'Granta 7'. Another of his short stories, 'October 1948' was published in 'Granta 17' in 1985.
His second novel, 'An Artist of the Floating World', is set in post-World War II Japan and focuses on Masuji Ono who reflects on his past career as a political artist of imperialist propaganda. The book, released in 1986, was shortlisted for the 'Booker Prize' and won the 'Whitbread Book of the Year Award' that year.
In 1989, he bagged the 'Man Booker Prize for Fiction' for 'The Remains of the Day', in which butler Stevens narrates in first person his professional and personal relationship with former colleague, housekeeper Miss Kenton. The novel was adapted into an eponymous film in 1993, starring Anthony Hopkins and Emma Thompson, which went on to win eight 'Academy Award' nominations.
His next novel, 'The Unconsoled' (1995), which describes the frustration of a famous pianist with his inability to take control of his commitments before a performance, marked a radical stylistic departure from his previous works. The book initially received overwhelmingly negative reviews for being "indecipherable", but won the 'Cheltenham Prize' that year and in 2006 was voted the third "best British, Irish, or Commonwealth novel from 1980 to 2005".
He ventured into the detective novel genre with his fifth novel, 'When We Were Orphans', which was released in 2000. Despite the fact that it is considered one of his weakest works, a view he himself supports, the novel went on to win a nomination for 'Man Booker Prize' that year. The next year, he published the short story 'A Village After Dark' in 'The New Yorker'.
In 2005, he released his sixth novel, 'Never Let Me Go', a dystopian science fiction novel which was adapted into a film in 2010 and a Japanese television drama in 2016. 'Time' magazine named it the best novel of the year and included it in 'TIME 100 Best English-language Novels from 1923 to 2005'. The book was also shortlisted for the 2005 'Booker Prize', the 2006 'Arthur C. Clarke Award' and the 2005 'National Book Critics Circle Award'.
In the following years, he wrote short stories like 'Crooner', 'Come Rain or Come Shine', 'Malvern Hills', 'Nocturne' and 'Cellists', which were published in 'Nocturnes: Five Stories of Music and Nightfall' in 2009.
Continue Reading Below
His latest novel, 'The Buried Giant', released in 2015, is an existential fantasy tale set immediately after Arthurian Britain. The novel earned mixed reviews from critics. 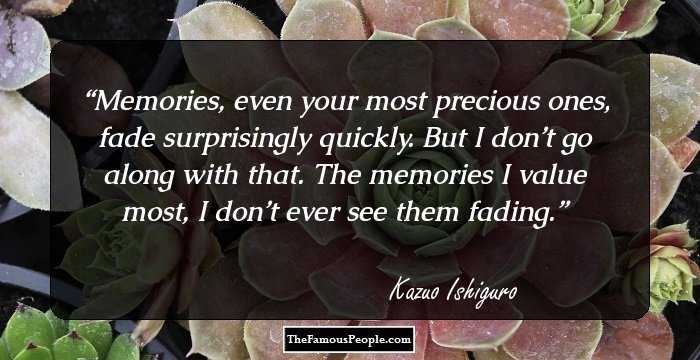 Quotes: I
Screenplays & Songs
Kazuo Ishiguro is also a screenplay writer who worked on two television films for Channel 4, 'A Profile of Arthur J. Mason' and 'The Gourmet' in 1984 and 1987 respectively. He was the original screenplay writer of the 2003 Canadian film 'The Saddest Music in the World' and also wrote the 2005 drama film 'The White Countess'.
In 2002, after he chose Stacey Kent's 'They Can't Take That Away from Me' for his 'Desert Island Discs', the jazz singer asked him to contribute lyrics to her album 'Breakfast on the Morning Tram'. The album received Grammy nomination in 2009, following which he continued to write songs for her 2011 album, 'Dreamer in Concert', her 2013 album, 'The Changing Lights', and her 2017 album, 'I Know I Dream'.
Major Works
Kazuo Ishiguro's most celebrated work so far is his third novel, 'The Remains of the Day', which has been adapted into a film, a BBC radio program and a musical.
His 2005 novel, 'Never Let Me Go', has also earned him many awards and accolades, and was adapted into a film, a stage play and a TV show. 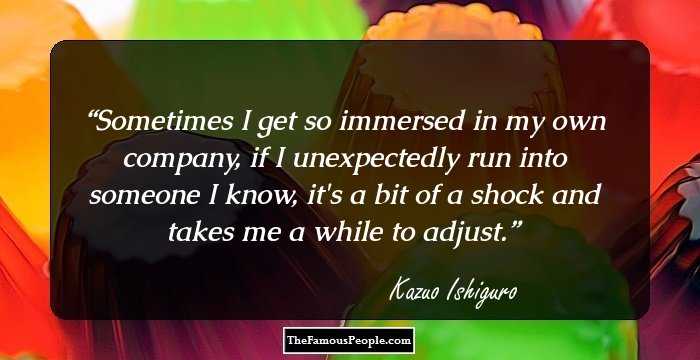 Quotes: Me, I
Awards & Achievements
Kazuo Ishiguro received the Nobel Prize in Literature in 2017 for his illustrious literary career.
In 1989, he won the Man Booker Prize for his novel 'The Remains of the Day'.
In 1982, he won the Winifred Holtby Memorial Prize for his novel 'A Pale View of Hills'.
Personal Life & Legacy
Kazuo Ishiguro met social worker Lorna MacDougall at the West London Cyrenians homelessness charity in Notting Hill while working as a residential resettlement worker there. They got married in 1986 and have a daughter named Naomi.
Trivia
According to Kazuo Ishiguro, he is often surprised to think how generous his neighbors have been in a new country after the war. However, the only times he felt uncomfortable were while playing war games with friends, and often campaigned for fighting the Germans and not the Japanese.
You May Like

Quotes By Kazuo Ishiguro | Quote Of The Day | Top 100 Quotes

See the events in life of Kazuo Ishiguro in Chronological Order