Bernard Cornwell is an English author best known for his historical novels. A prolific writer, he has till now authored four books about the American Civil War, three about Arthur’s Britain, three about the Hundred Years’ War, and five contemporary thrillers in addition to his famous Sharpe series. He is most famous as the author of the books featuring the fictional character Richard Sharpe—an English soldier during the Napoleonic Wars. His series on Sharpe, composed of several novels and short stories, track the character’s progress in the British Army during the Napoleonic Wars. His Sharpe series became so popular that it was later adapted into a television series. An active and pleasant man with a cheerful demeanor, Cornwell is absolutely in love with his profession. In fact it was true love that actually led him to writing. He was living in the U.K. when he fell in love with a visiting American and followed her to the U.S. Unable to get any other job, he began writing fiction. Combining his love for writing with his love for history, he focused on writing historical novels. Eventually his books became a hit with the readers and he decided to pursue writing as a full-time profession. In addition to fiction he has also published a non-fiction work on the battle of Waterloo. Kazuo Ishiguro
Novelists #457
Writers #1653
DID WE MISS SOMEONE?
CLICK HERE AND TELL US
WE'LL MAKE SURE
THEY'RE HERE A.S.A.P
Quick Facts

British People
British Men
Male Writers
Pisces Writers
Male Novelists
Childhood & Early Life
He was born in London on 23 February 1944 as a result of a brief liaison between Dorothy, a member of the Women's Auxiliary Air Force, and William Oughtred, a Canadian airman.
Since he was born out of wedlock, he was given up for adoption as a baby. Joe and Marjorie Wiggins, members of the Peculiar People, a now-extinct Protestant fundamentalist sect based in Essex, adopted him. He had four adopted siblings at the Wiggins home.
He had a difficult childhood and was often beaten up by his father. His parents were very strict and religious, and even banned television at home. His mother was a very unhappy woman with whom Bernard had a troubled relationship.
He received his primary education from the Monkton Combe School. Later on he went to the University of London where he read theology. Studying about religion made him an atheist. 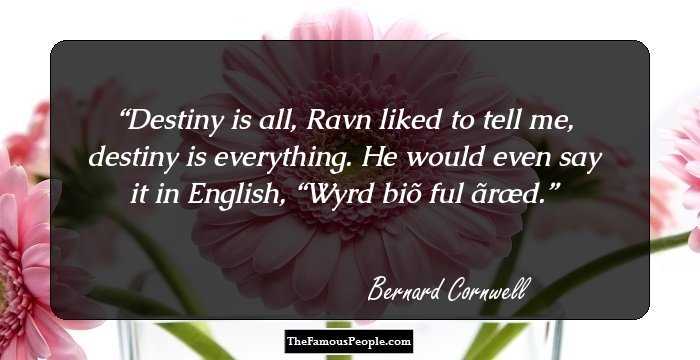 The Sexiest Men Of 2020, Ranked
Career
Following his graduation, he worked as a teacher for a while, teaching “O” Level Tudor history. He attempted to enlist in the British armed services but was rejected because of his myopia.
He was drawn to television and secured a job at BBC, working on the channel’s News and current affairs television programme, ‘Nationwide’. He worked at BBC for the next 10 years and was eventually promoted to head of current affairs at BBC Northern Ireland.
In 1978, a group of American tourists visited Ireland and he fell in love with one of them—Judy, an attractive American travel agent. She too reciprocated his feelings but could not move to the UK because of family issues.
So he decided to immigrate to the US to be with her. He was unable to get a United States Permanent Resident Card (green card) and therefore could not get a job. But he did not lose heart; he started writing novels as this did not require a work permit.
He wrote a story with a fictional Napoleonic Wars rifleman named Richard Sharpe as the main character. Though initially met with disappointment, he was eventually successful in signing a deal with the Collins publishers; and thus, the Sharpe series was born.
The character of Richard Sharpe, which the author described as being an experienced soldier “six feet tall, having an angular, tanned face, long black hair and blue eyes” became very popular among the readers.
Cornwell had always loved history and writing historical novels was his dream come true. Blessed with a vivid imagination and an uncanny knack for story-telling, he was soon churning out several novels and short stories which were eagerly devoured by his fans.
He wrote three novels—‘The Winter Kind’, ‘Enemy of God’, and ‘Excalibur: A Novel of Arthur’—which together comprised the ‘Warlord Chronicles’. This series was a mixture of historical fiction and Arthurian mythology.
In addition to historical novels he also authored five contemporary thrillers, the last of which was written in 1992. The novels were well received but Cornwell personally enjoys writing historical fiction more.
In 2000 he wrote the novel, ‘Harlequin’, which was the first book in ‘The Grail Quest’ series. ‘Vagabond’, the second novel in the series was released a couple of years later in 2002. The novels ‘Heretic’ (2003) and ‘1356’ published several years later in 2012 completed the series.
Another one of his famous series is ‘The Saxon Tales’ which tell the story of the Danish invasions in the 9th and 10th century Britain. 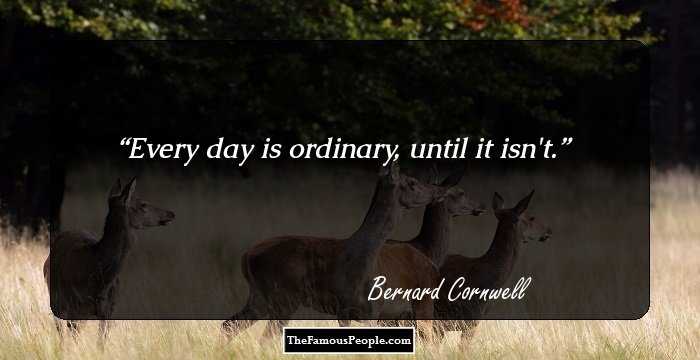 Major Works
He is best known as the creator of the fictional character, Richard Sharpe, and the stories which revolve around his adventures in the war. His books on Sharpe became so popular that that the series was adapted into a British series of historical war television dramas with Sean Bean portraying the main character.
Personal Life & Legacy
While living in the U.K. he fell in love with a visiting American, Judy. But Judy had been previously married and had three children living in the U.S, so she could not relocate to U.K. Thus he moved to the U.S. and married her in 1980.
The couple is happily married and his wife co-wrote with him a series of novels, published under the pseudonym "Susannah Kells". 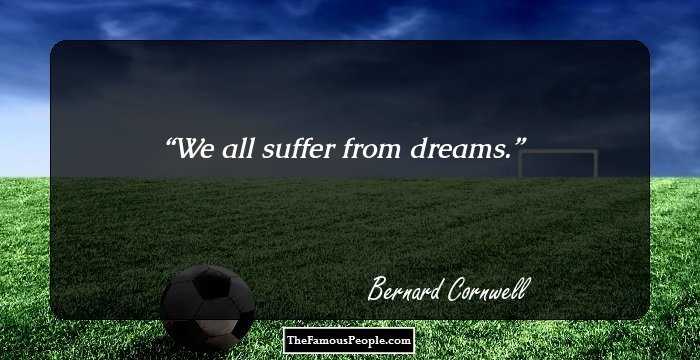 Quotes By Bernard Cornwell | Quote Of The Day | Top 100 Quotes

See the events in life of Bernard Cornwell in Chronological Order