Thomas De Quincey was an English essayist and critic best known for his work, ‘Confessions of an English Opium Eater’. Born in a prosperous family, Quincey’s tryst at writing started after his brief elopement and comeback into the family. During his teens, he widely read the works of William Wordsworth and Samuel Taylor Coleridge and was influenced by them. Interestingly, Quincey’s literary career started as a means to meet the financial needs. He started off by contributing articles in various magazines and periodicals and soon found his first success with the book, ‘Confessions of an English Opium Eater’. Semi-autobiographical, the book gave a detailed account of his opium addiction and its effect on his life. Following the success, he came up with a large plethora of works in wide ranging field, from history to fiction, literary criticism to biographies and so on. His work stood out for its imaginative prose style that mixed an elucidation of other’s ideas with his personal reflection. De Quincey’s work influenced later literary figures such as Edgar Allan Poe and Charles Baudelaire British People
Essayists
Biographers
Non-Fiction Writers
British Men
Childhood & Early Life
Thomas de Quincey was born on August 15, 1785, in Manchester, England to Thomas Quincey and Elizabeth Penson. His father, a successful merchant by profession, died when he was very young.
Young Quincey initially studied at the King’s Edward School, before being forcefully sent to Wingfield in Wiltshire. Extremely intelligent and brainy, he attended the Manchester Grammar School with an aim to obtain a scholarship at Oxford. It was during this time that he first chanced upon reading the works of Wordsworth and Coleridge, precisely the Lyrical Ballads.
Bored with the routine, he ran away from school and wandered around the Wales region until he was broke. He then left for London. Instead of returning to his family, he lived in starvation. This period of deprivation profoundly influenced his later writings.
Upon returning home, he attended Worcester College, Oxford in 1803. Following year, he first started using opium in the form of laudanum, a liquid tincture. Though he completed his studies, failure to take the oral exam led him to leave the university without a formal degree. 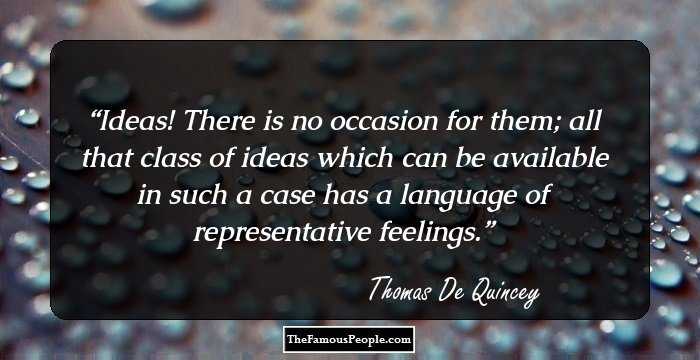 The Sexiest Men Of 2020, Ranked
Career
Having finished college, he became a close associate of Coleridge and Wordsworth. By 1809, he settled at Grasmere at Wordsworth’s former home, Dove Cottage.
Quincey’s financial condition worsened by the end of 1810s. He had a huge family to support and his opium addiction had increased by manifolds. Monetary constraints led him to take up literary profession.
In 1818, he took up the post of the editor in a Tory newspaper ‘The Westmorland Gazette’. However, difference of opinion and his inability to meet deadlines led him to resign in 1819.
He actively started contributing his articles in newspapers and magazines, penning on a wide range of topics right from literary criticism to translations of German poetry and drama, to popularizing the theories of British economist David Ricardo.
It was in 1821 that he first found success for his writings with his article published in the London Magazine that gave an account of his experiences as an opium user. His article was so well-received that it took the form of a book in 1822 under the title, ‘Confessions of an English Opium Eater’.
‘Confessions of an English Opium Eater’ was one-of-its-kind book as it gave readers a glimpse of the pleasures and pains of opium usage. Semi-autobiographical in writing, the book detailed the extreme euphoria opium users experience while under the drug influence, but carefully admonishes the same by describing the depressive state that follows soon after.
Following the success of ‘Confessions of an English Opium Eater’, Quincey soon became a renowned figure in the literary circle. He started contributing extensively to magazines and leading English periodicals.
In 1823, he came up with the essay, ‘On the Knocking at the Gate of Macbeth’ which served as his first work as a literary critic. Brilliantly written, the work gave a detailed psychological analysis of Shakespearean criticism.
In 1825, he translated a German hoax novel, ‘Walladmor’ by Sir Walter Scott, a Scottish historical novelist and poet.
Continue Reading Below
In 1832, he tried his hand at fiction with the novel, ‘Klosterheim’. He followed this up with, ‘Revolt of the Tartars’ and ‘The Avenger’. He wrote a book of short story, titled, ‘The Household Wreck’
Other than fiction and short story, he penned a series of biographies of writers, poets and politicians he personally knew. A large number of his works appeared in Blackwood's Edinburgh Magazine and its rival Tait's Magazine.
He came up with a series of reminiscence of prolific Lake Poets including Wordsworth, Coleridge and Southey, under the title, ‘Lake Reminiscence’ which served as one of his most important works.
In 1840s, his reputation as Britain’s one of the most prolific writers grew exponentially. Ticknor and Fields publishing firm, based in Boston, paid him royalties for his collected works issued in US. Within a matter of time, his works gained huge readership across US.
In 1850, he became a regular contributor in the Edinburgh periodical, Hogg’s Weekly Instructor. In 1856, the second edition of ‘Confessions’ was published in ‘Selections Grave and Gay from Writings Published and Unpublished by Thomas De Quincey’. The first volume of the edition appeared in 1853 and the last volume in 1860.
During the last phase of his life, he continued to write new articles, and assembled and revised his earlier works for new collected editions.
De Quincey’s masterpiece was the 1822 published book, ‘Confessions of an English Opium Eater’. The title aptly describes the content of the book which dealt with Quincey’s addiction of opium and its effect. Partly autobiographical in nature, the book gives a wide overview of the effect of opium, the pleasure and pain, the euphoria and nightmare that the continued use of the drug produced. 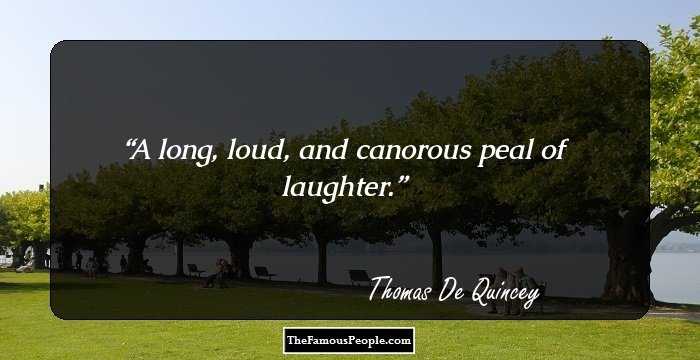 Major Works
De Quincey’s masterpiece was the 1822 published book, ‘Confessions of an English Opium Eater’. The title aptly describes the content of the book which dealt with Quincey’s addiction of opium and its effect. Partly autobiographical in nature, the book gives a wide overview of the effect of opium, the pleasure and pain, the euphoria and nightmare that the continued use of the drug produced.
Personal Life & Legacy
De Quincey entered into wedlock with Margaret Simpson in 1816. The couple was blessed with eight children of which only four survived. Margaret passed away in 1837.
His stint with opium started way back in 1804 when he used it to relieve himself from neuralgia. By 1813, he became a daily user of the drug. Between 1813 and 1819, he engaged in high dose of opium. What started as a health measure went on to become a pleasure-inducer and later an addiction that was hard to beat.
Arguably it is said that the effect of opium on De Quincey’s literary career was extremely high. Periods of low consumption of opium was marked as a literary unproductive phase while during high consumption days his literary output blossomed.
De Quincey passed away on December 8, 1859 in Edinburgh. He was buried in St Cuthbert's Churchyard at the west end of Princes Street. 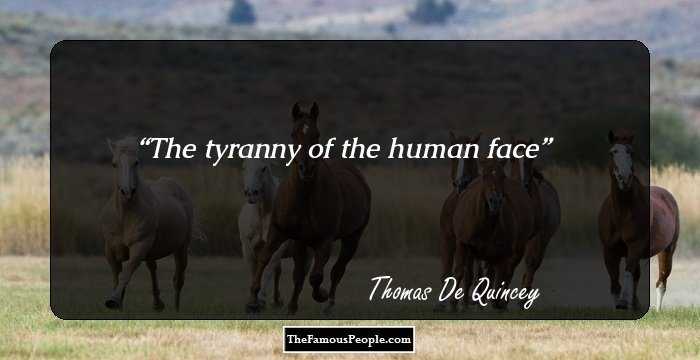