(One of the Epic Poets of the 19th Century)

Percy Bysshe Shelley was an English Romantic poet best known for his classic poems and verse dramas. Although he did not get his due recognition while he lived,we now know him as one of the finest lyrists ever born in England.Always a rebel, he refused to submit to fagging at school. Later hewas expelled from Oxford for publishing an atheist pamphlet. His father’s intervention could have reinstated him; but Shelley refused to disown the pamphlet. The strained relationship between father and sonbroke down completely when he eloped with a girl from an unequal family. From then on, his life was a continuous struggle.For two years, he did not have any income andhis radical views and faith in free love was not at all approved by the society. Yet, he worked for the welfare of the people, writing poems, and distributing pamphlets. Initially, his works were politically oriented. It was only when he settled down in Italy, away from direct influence of English politics that he began to create his best works. It is unfortunate that such a promising poet did not live to see his thirtieth birthday. Peter Morgan
4th August In History
DID WE MISS SOMEONE?
CLICK HERE AND TELL US
WE'LL MAKE SURE
THEY'RE HERE A.S.A.P
Quick Facts

Quotes By P B Shelley Poets

epitaphs: These are two friends whose lives were undivided:, So let their memory be, now they have glided, Under the grave; let not their bones be parted,, For their two hearts in life were single-hearted.

British People
Essayists
Playwrights
British Men
Eton College
Childhood & Early Life
Percy Bysshe Shelley was born on 4 August 1792 at Field Place, located near Broadbridge Heath, a village inHorsham district of West Sussex. His father, Sir Timothy Shelley, 2nd Baronet of Castle Goring, was a Member of Parliament and an associate of Duke of Norfolk.
His mother, Elizabeth Pilfold, came from a landowning family in Sussex. Percy was the eldest of the couple’s six children and had four sisters and a brother younger to him.
Percy started his education at home under Reverend Evan Edwards of nearby Warnham. Later in 1802, he was enrolled at Syon House Academy of Brentford, Middlesex.
In 1804, he shifted to Eton College. Here he refused to submit to fagging, a practice which required junior students to serve the senior boys as servants. As a result, hehad to undergo extreme physical and mental bullying at the hands of theolder boys.
Consequently, his academic performances began to suffer and he became more and more reclusive.However, he did develop an interest in science and used his knowledge to cause mischief, going to the extent of blowing up a tree with gunpowder in the school ground. Concurrently, he also started writing verses.
In 1810, he passed out from school and entered University College, Oxford. He studied there for only one year. It is believed that during this period he attended only one lecture. However, he read a lot and vigorously pursued his literary ambition. 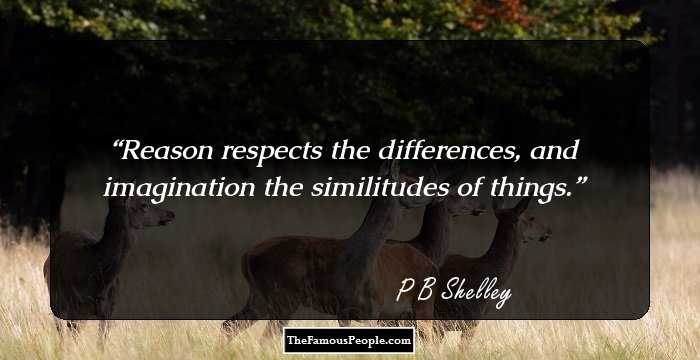 Continue Reading Below
Career
In 1810, Shelley published his first book,a Gothic novel titled ‘Zastrozzi.’It is possible that he had written it while studying at Eton. The book throws light on his early atheistic as well as heretical views, which he put in the mouth of the villain Zastrozzi.
In the same year, he also published his first poetry book, ‘Original Poetry by Victor and Cazire.’ These poems were written in collaboration with his sister Elizabeth while he was in Eton. It is believed that his father Sir Timothy Shelley initially patronized him a lot and helped in publication of his books.
In 1810, Shelley wrote another Gothic novel, titled ‘St. Irvyne; or, The Rosicrucian: A Romance’, which was published in 1811. It was probably the first book that he had written while studying at Oxford.
Around the same time, Shelley had his fourth book, ‘Posthumous Fragments of Margaret Nicholson’, published. It was a collection of poems written in collaboration with Thomas Jefferson Hogg, with whom he had developed a close friendship.
Sometime now, healso took out a pamphlet, titled ‘Necessity of Atheism’ and had it circulated with the help of Hogg. Many critics suspect that its purpose was to antagonize and provoke the authority, for the title was more confrontational than the argument.
When it came to the notice of the University authorities, they asked them to repudiate their authorship. The boys refused to do so. Therefore, in the spring of 1811, Shelley and Hoggwere expelled from Oxford. The relation between Shelley and his father became strained because of this.
His relation with his father broke down completely when at the end of August 1811Shelley eloped with Harriet Westbrook. Apparently, he wanted to rescue her from an oppressing boarding school environment.Enraged, Sir Timothy revoked his son’s allowance, which made Percy’s resolve stronger.
After getting married in Edinburg, the couple travelled first to Devon and then to North Wales before settling down at Keswick in November 1811. Here, he met Robert Southey and William Godwin. This was also the time when he wrote ‘Queen Mab: A Philosophical Poem’, which reflected Godwin’s socialist philosophy.
In February 1812, he travelled to Dublin, where he took out a pamphlet titled. ‘An Address to the Irish People’, in which he advocated political rights for Roman Catholics and autonomy for Ireland. It did not go down well with the government.
Continue Reading Below
Soon, Shelley was disillusioned with his marriage and pined for more intellectual companionship. He found it in Mary Wollstonecraft Godwin, the daughter of William Godwin and his first wife, Mary (née Wollstonecraft).
In July 1814, Shelley and Mary eloped to France. Mary’s stepsisterClaire accompanied them. The trio travelled, mostly on foot, through France, Switzerland and Germany. By the time they returned to England, Shelley was heavily in debt and to avoid the creditors, hekept moving from place to place.
Respite came when his grandfather, Sir Bysshe Shelley, 1st Baronet of Castle Goring, died in January 1815. Provision of his will forced Sir Timothy to grant Percy an annual income and pay up his debt.
Now with a steady income, Percy B Shelley concentrated on writing. In late 1815, while living in a cottage in Bishopsgate, Surrey, he wrote ‘Alastor, or The Spirit of Solitude’. Critics consider it to be his first major work.
Sometime in the middle of 1816, Shelley and Mary travelled to Switzerland to meet the renowned poet, Lord George Gordon Byron. They had been urged by Claire to take this trip as she had a romantic interest in Byron.
Very quickly, the two poets—Shelley and Lord Byron—wholived in neighboring houses on the shores of Lake Geneva,became close friends. They began to spend a lot of time together, reading and talking to each other. It is believed that Shelley encouraged Byron to write his epic poem ‘Don Juan’ during this period.
Influenced by Byron, Shelley also wrote a number of poems. Among them the most important was ‘Hymn to Intellectual Beauty.’ Critics consider it to be his first major work after ‘Alastor.’ ‘Mont Blanc: Lines Written in the Vale of Chamouni’, another famous poem, was also written during this period.
On returning to England, they took up their residence in Marlow, Buckinghamshir. By this time, Harriet had committed suicide and Shelley was able to marry Mary. At Marlow, they began socializing with intellectual giants like Thomas Love Peacock, John Keats, and Leigh Hunt.
Shelly’s best known work of this period was 'Laon and Cythna; or, The Revolution of the Golden City.' It was a long narrative poem, in which he attacked religion. It was first published in 1817, but was hastily withdrawn. Later in 1818, it was revised and republished as ‘The Revolt of Islam.
Continue Reading Below
Another outstanding poem that he wrote during this period was ‘Ozymandias.’ It was a sonnet, written in friendly competition with fellow poet Horace Smith, who also wrote a sonnet on the same topic and with the same title.
In early 1818, Shelley along with his wife, travelledto Italy with Claire to meet Byron, who at that time was residing at Venice. They reached Milan in April and then proceeded to visit Pisa and Livorno before reaching Venice in August 1818.
On the way, he translated Plato’s ‘Symposium’, wrote an essay, titled ‘On Love’ and completed his poem, ‘Rosalind and Helen.’ So far, his works were mostly politically oriented; but now, away from England, in the company of Lord Byron, the poet in him began to bloom.
Shelley lived in Venice till October 1818. Thereafter, they travelled to different Italian cities like Naples, Rome and Florence, finally settling on the bay of Lerici on the north-western Italian coast in April 1822. Shelley created most of his major works during these four years in Italy. 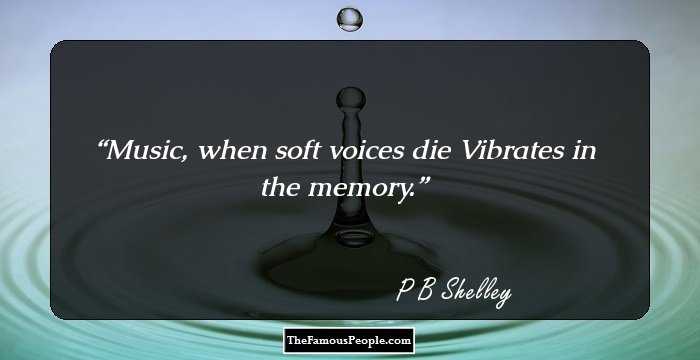 Quotes: Music
Major Works
’Ode to the West Wind’, written in late 1819, is one of Percy B Shelley’sbest known works. In this poem, he called for a revolution that will bring in new order. The last line, ‘If Winter comes, can Spring be far behind?’ is the ultimate words of hope that he wanted to convey to the suffering multitude.
His other well-known poems are ‘To a Skylark’, ‘Music, When Soft Voices Die’, ‘The Cloud’,‘The Masque of Anarchy’, and ‘Lines Written among the Euganean Hills.’ Among the dramas produced by Shelley, ‘Prometheus Unbound’ and ‘The Cenci’ are the most popular.
Personal Life & Legacy
In 1811 Percy Bysshe Shelley married Harriet Westbrook, the daughter of a prosperous tavern-keeper. They had a daughter, and a son Charles.
In July 1814, before Charles was born, Shelley abandoned Harriet and eloped with Mary Wollstonecraft Godwin, best known for her Gothic novel, ‘Frankenstein: or, The Modern Prometheus.’ He however kept on providing financial support to Harriet and the children.
In 1816 Harriet committed suicide. By now, she had been living with another man, abandoning her children in the care of her sister. Three weeks after the incident, Shelley married Mary Godwin. They had one son called Percy Florence Shelley, who became 3rd Baronet of Castle Goring.
Shelley died on 8 July 1822 In Italy. On that fateful day, whilesailing back home from a visit toLord Byron and James Leigh Hunt, his schoonerwas caught in a storm and overturned. Shelley was drowned, but his body was later recovered. At that time he was not yet thirty.
His philosophy of social justice and non-violence was admired by many. It is believed that Henry David Thoreau's civil disobedience and Mahatma Gandhi's passive resistance was inspired by his philosophy. Karl Marx was also one of Shelley’s great admirers. 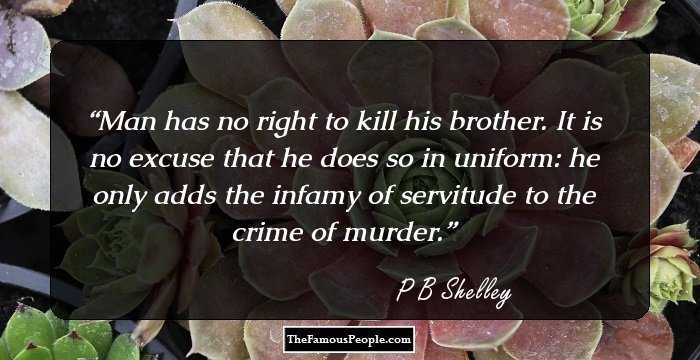