Emily Bronte is a poetess and novelist belonging to the Victorian era and her novel ‘Wuthering Heights’ is a timeless novel. This biography provides detailed information about her childhood, profile, career and timeline 30th July In History
DID WE MISS SOMEONE?
CLICK HERE AND TELL US
WE'LL MAKE SURE
THEY'RE HERE A.S.A.P
Popularity Index
Writers #309
Emily Brontë
Quick Facts

Salman Rushdie
Emily Bronte is an exponent of English literature and her only novel has been regarded as a masterpiece. This author was a person who preferred to be at home than going out and mingling with people. She was immersed in her own world and had no desire to venture beyond the threshold of her house. Apparently, her siblings were her only friends. This withdrawn writer lapsed into homesickness every time she stayed away from home. She has been an enigmatic figure and much is not known about her personal life. Even her novel has a predominant mysterious setting. There are two narrators in the novel which provides the readers with a dual viewpoint. The writer liked to experiment with different techniques of writing and it is evident in the portrayal of characters in her novel Wuthering Heights. She had provided vivid description of the settings which engrosses the readers and keeps them involved. It has a complex plot and every character has been distinctively created with detailed artistry. The novel has received much acclamation and is among one of the greatest novels of English literature. Although the writer did not live long even to celebrate the success of her novel yet this is a great contribution which she has made to the literary world Novelists
British Women
Leo Poets
Leo Writers
Childhood & Early Life
She was born to Patrick Bronte and Maria Branwell on 30th July 1818, in the Thornton village of Yorkshire, England. She had five siblings Maria, Elizabeth, Anne, Charlotte and Patrick Branwell. However, Maria and Elizabeth met with an early death.
In 1821, her family shifted to Haworth and a few months later, their mother died after suffering from cancer and left the children in a lonely state.
When she was six-years old, she joined the ‘Clergy Daughters’ School’ located at Cowan Bridge, where her elder sisters Elizabeth, Maria and Charlotte were already enrolled at.
Her sisters Elizabeth and Maria fell ill after they caught some fatal disease which resulted in their deaths. After that, their father took Emily and Charlotte back home. There they were home-tutored by their father and their maternal aunt Elizabeth Branwell. The Bronte sisters, in spite of not having a formal education were provided with numerous books to read which consisted of writers such as Shelley, Sir Walter Scott, and Byron.
The Bronte children created a world of their own in which they dwelled and carved fictional stories around it. Though some of these were later published most of them did not survive.
In 1835, she got enrolled at the ‘Roe Head Girls’ School’, where her sister Charlotte worked as a teacher. However, her longing to be back home, made her leave the school and return back home. 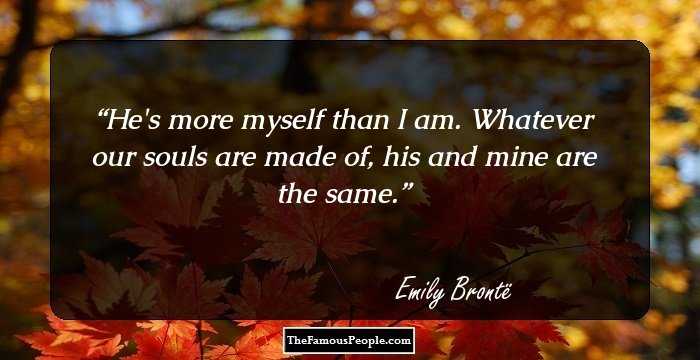 Women Poets
British Poets
Women Writers
British Writers
Career
In 1838, she joined the ‘Miss Patchett’s School’ located near Halifax, as a teacher and after working there for a few months, she left the job.
Charlotte found out some poems of Emily which she penned secretly. This revealed the fact that the three Bronte sisters had been engaged in writing poetry in their own way which they did not even share with their siblings.
In 1946, a collection of their verses was published under their pseudo names entitled ‘Poems by Currer, Ellis and Acton Bell. They used pen names so as to avoid the bias which female authors were subjected to during that period.
In 1947, this writer’s novel ‘Wuthering Heights’ was published as part of a volume of three which also consisted her sister Anne’s novel ‘Agnes Grey’. This volume was published by ‘Thomas Cautley Newby’. This publication followed after Charlotte Bronte’s novel ‘Jane Eyre’ which became popular soon after its publication.
Wuthering Heights’ was the only novel of this excellent writer and although this did not gain much appreciation as soon as it was printed, it later, was accepted as a classic by the literary world.
This novel was set in the moors of Yorkshire and tells the stories of Earnshaw family and the Linton family residing in ‘Wuthering Heights’ and ‘Thrushcross Grange’.
In the novel, Bronte experimented with the character of Heathcliff who is the hero or the anti-hero who is dark, gothic, mysterious, and barbarous. However, when the novel ends, the readers do not seem to feel disgusted about him. Rather they are left with a sense of pity for this hero. This art of portraying characters has been done effortlessly by Bronte.
This novel was first published under the nom de plume of Emily Bronte which is Ellis Bell till its edition of 1850. 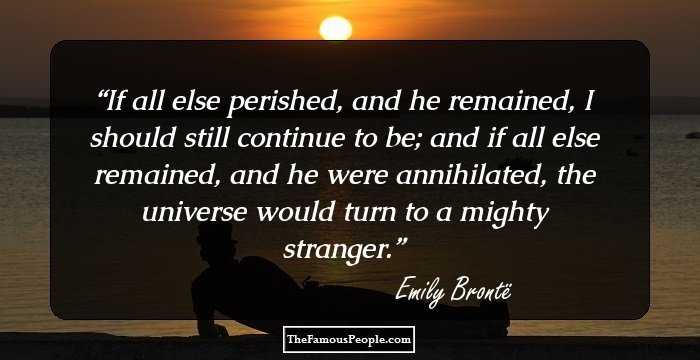 Women Novelists
British Novelists
British Women Poets
British Women Writers
Major Works
Her only novel ‘Wuthering Heights’ has earned immense fame for Emily Bronte. This book was not acclaimed instantly because of its stark description and flaming emotions but later it was appreciated by critics as well as readers. This has even been regarded as a classic of English literature.
Recommended Lists:

British Women Novelists
Leo Women
Personal Life & Legacy
This author did not prefer much exposure to social world and as such details about her are lacking. She was a person who preferred to be at home and took delight in solitude. She had her siblings as her friends and they enjoyed being together.
She was interested in French and German languages and in 1942; she and Charlotte went to Belgium in order to learn these languages.
Her only novel ‘Wuthering Heights’ made her a renowned name in English literature but she did not live long to know about her popularity.
On 19th December, 1848, a year after the publication of her novel, she breathed her last in her house at Yorkshire. Her resting place is in the family vault in Church of St. Michael and All Angels, Haworth, West Yorkshire. This is the resting place of all the members of the Bronte family expect Anne Bronte, as she died in Scarborough.
Her residence has been converted into the ‘Bronte Parsonage Museum’ where the literary works of the Bronte sisters are conserved and the ’The Bronte Society’ manages the museum.
‘Selections from the literary remains of Emily and Anne Bronte’ was published in the year 1850.
Her works consisted in the book ‘Privately’ which was published by ‘Dodd, Mead and Company’ of New York in the year 1902. A few years later, her works were published in ‘The Complete Poems of Emily Bronte’. 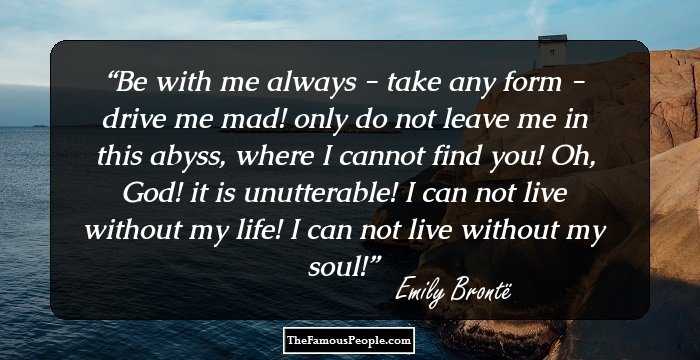 Quotes: Me, I
Trivia
The Bronte sisters created an imaginary place and named it Gondal and all their adolescence works revolved around this place
You May Like

Quotes By Emily Brontë | Quote Of The Day | Top 100 Quotes

See the events in life of Emily Brontë in Chronological Order