Swedish scientist Svante August Arrhenius remains one of the most influential scientists in history and although it is true that he started off as a physicist; he ended up being more influential as a researcher par excellence on chemistry. He showed a remarkable gift for arithmetic at an early age and for all intents and purposes he was a child prodigy who excelled in the sciences. His major projects were related to chemistry and Arrhenius was also one of the leading purveyors of what is now known as physical chemistry. Arrhenius was Sweden’s leading scientist throughout his life and his papers on the greenhouse effect is regarded as a benchmark study on climate change in the 21st century. He is known as the ‘father of climate change’ studies and all the research that has been conducted on it are based on the findings of Svante Arrhenius. Other than his study on the greenhouse effect; he is also famous for his work on the theory of electrolytic dissociation. Arrhenius is often referred to as a physical chemist in light of the sort of studies he conducted. Read on to know more about his life and contribution to the field of physical chemistry. Archer Martin
Chemists #27
Physical Chemists #2
Scientists #252
DID WE MISS SOMEONE?
CLICK HERE AND TELL US
WE'LL MAKE SURE
THEY'RE HERE A.S.A.P
Quick Facts

Swedish Celebrities
Swedish Men
Male Chemists
Male Scientists
Swedish Chemists
Childhood & Early Life
Svante Arrhenius was born in Vik near the Swedish town of Uppsala on Febuary 19, 1859 to Svente Gustav and Carolina Thunberg Arrhenius. His father was a non-teaching employee at the ‘Uppsala University’.
By the year 1862, a 3 year old Arrhenius learned how to read and became the talk of the town. Additionally, he also became an expert in arithmetic at the same time by going through his father’s accounting books.
In 1876, Svante Arrhenius graduated from the highly regarded cathedral school in the city of Uppsala and he was also the youngest graduate at the time.
In the year 1876, at the age of 17, he went to study at ‘Uppsala University’ and his subjects of study were physics, chemistry and mathematics. Arrhenius was awarded his bachelor’s degree two years later.
Arrhenius was dissatisfied with the physics teacher at ‘Uppsala University’ and so he discontinued his research work 1881 in order to study under Erik Edlund at the ‘Swedish Academy of Sciences’, Stockholm.
Continue Reading Below
You May Like

The Sexiest Men Of 2020, Ranked
Career
In 1884, the budding chemist put forward his dissertation at the ‘Swedish Academy of Sciences’ and in total it contained 56 theses, most of which would be considered flawless in the modern age.
In his 1884 dissertation he proved that a solution of salts and water is a good conductor of electricity while individually they weren’t. Although the theory did not impress his professors; stalwarts of physical chemistry like Rudolf Clausius and Wilhelm Ostwald were impressed.
Arrhenius was given a grant by the ‘Swedish Academy of Sciences’ in 1886 which allowed him to travel and conduct research with the leading scientists of the day like Ostwald and Boltzmann.
In the period between 1885 and 1890, he also carried out studies related to cosmic physics while at the same time he continued to make remarkable strides in findings related to electrolytic dissociation theory.
In the year 1891, Svante was appointed as a lecturer in physics at the Stockholms Hogskola, which is now better known as ‘Stockholm University’. He continued in that position till he was promoted as a professor four years later.
In 1896, he started work on proving how the fluctuations in the carbon dioxide levels can have an effect on the climate and temperature of a place. He termed it the ‘Greenhouse Effect’ and it is regarded as the one of the most pioneering studies on climate change to this day.
From 1901 till his death he had a major influence in the awarding of the Nobel Prizes as member of the Nobel Committees on Physics and Chemistry.
Major Works
Svante Arrhenius was a staunch believer in making science and scientific thinking popular among the masses and to that end he published the famous book ‘Worlds in the Making’ in 1908. It was translated into many languages and was an immensely popular book.
Awards and Achievements
The Royal Society of London recognized Arrhenius’ pioneering study on the theory of dissociation and awarded him with the ‘Davy Medal’ in the year 1902.
In the year 1903, this eminent scientist became the 3rd recipient of the Nobel Prize for Chemistry for his breakthrough in the study of ‘Greenhouse Effect’; which remains one of the most important studies in modern history.
Personal Life and Legacy
Svante married his student Sofia Rudbeck in 1894 but the marriage ended two years later. He had one son from his first marriage and he was named Olof Vilhelm Arrhenius. Olof went on to become a chemist as well.
In the year, 1905 Arrhenius married Maria Johansson and the marriage lasted till the former’s death. He had two daughters and a son with Maria.
On 2nd October, 1927 this renowned chemist succumbed to inflammatory bowel disease with which he had been suffering. He died at the age of 68 and he was buried in Uppsala.
The theory of dissociation and the ‘Greenhouse Effect’ remain his greatest legacies; considering the profound effect it has had on science and the world.
You May Like

See the events in life of Svante Arrhenius in Chronological Order 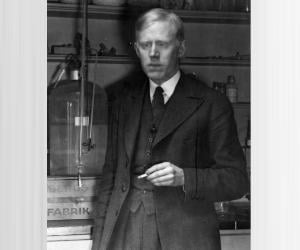