Advanced Search
Alfred Bernhard Nobel was a Swedish inventor, engineer and industrialist who had obtained a total of 355 patents in his lifetime. He was most well-known for inventing dynamite, and for developing some more powerful explosives and detonators to effectively ignite them. He built a network of almost a hundred factories all over the world to manufacture explosives and ammunition, and amassed a massive fortune from his businesses. In fact, at the time of his death, he was one of the wealthiest persons on the world. Since he was unmarried and childless, there were many speculations about the contents of his last will which he had signed on 27th November, 1895. The contents of his will caused a lot of disappointment to his much hopeful extended family as Nobel had left much of his wealth for the establishment of an international prize fund! As the inventor of dynamite, he had earned the sobriquet, ‘The Merchant of Death’ which deeply traumatized Nobel who was a pacifist at heart. He did not want to be remembered as the reason behind mass destruction after his death, and in order to redeem his posthumous reputation, he left the major portion of his wealth for the establishment of the Nobel Prizes to be awarded for eminence in five different fields, without any discrimination on basis of nationality. Jens C Skou
DID WE MISS SOMEONE?
CLICK HERE AND TELL US
WE'LL MAKE SURE
THEY'RE HERE A.S.A.P
Quick Facts 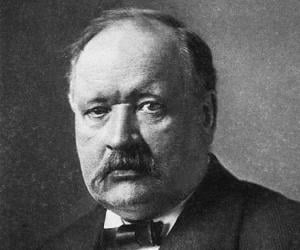 Swedish People
Swedish Men
Male Chemists
Male Scientists
Libra Scientists
Childhood & Early Life
He was one of the eight children born to Immanuel Nobel and Karolina Andriette. Only Alfred and three of his brothers survived to adulthood while the other children perished. His father was an inventor and engineer.
After unsuccessfully trying to establish a business for years, his father was finally successful in opening a business producing machine tools and explosives.
Private tutors were engaged to educate Alfred and he excelled in his studies. He especially loved chemistry and languages; he was fluent in English, German, French and Russian.
He studied under the chemist Nikolai Zinin and went to Paris in 1850. Such was his love for chemistry that he went to the U.S. as an 18 year old to further his knowledge on the subject. He filed his first patent—for a gas meter—in 1857. 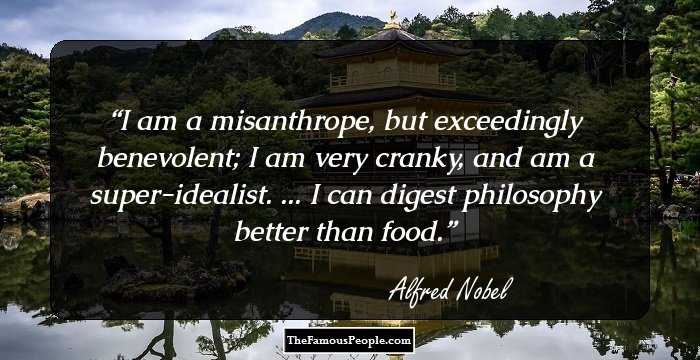 Quotes: I
Continue Reading Below
Later Years
He started working in his father’s factory after completing his studies. The factory came under the control of his brother Ludvig in 1859 and thrived under him. Alfred was deeply interested in studying explosives and obsessively experimented with nitroglycerine, a highly explosive compound.
A tragic accident happened at the shed used for preparing nitroglycerin in which five people, including his younger brother, Emil, were killed. Nobel became more focused on developing explosives that were safer than nitroglycerin.
Through constant experimenting, he found that when nitroglycerin was combined with an absorbent inert substance, it became more convenient to handle and safer to use. This new substance, dynamite, was patented in 1867 and adopted in wide usage in mining internationally. It was the first safely manageable explosive that was stronger than black powder.
Continuing his fascination with nitroglycerin, he mixed it with nitrocellulose compounds and developed a transparent, jelly-like substance which was even more powerful than dynamite. It was called gelignite and patented in 1876. Gelignite was more stable and better for the purpose of mining. This invention helped him amass a great deal of wealth.
His brothers became successful and wealthy businessmen exploiting oilfields along the Caspian Sea. Nobel also invested in their business and became very rich.
He formulated a smokeless propellant made from nitrocellulose and nitroglycerin which also contained 10% camphor. This mixture was called ballistite and was patented in 1887.
His brother Ludvig died in Cannes in 1888. Confusing him for his more famous brother, a French newspaper wrongly published the obituary of Alfred Nobel, stating that “the merchant of death is dead”. Alfred was highly upset to realize that this was how he would be remembered after his death.
He wanted to do something to redeem his reputation and left a major portion of his massive wealth for the creation of an international prize fund for honoring eminent personalities in the fields of physics, chemistry, medicine, literature, and for work in peace. His last will, signed on 27th November 1895 laid the foundation for the prize. The first Nobel prizes were awarded in 1901. 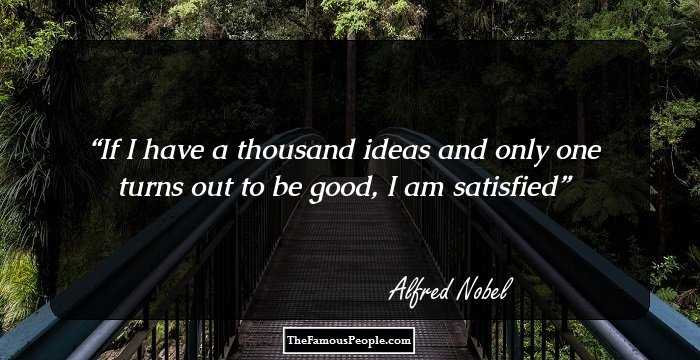 Quotes: I
Major Works
He invented the explosive dynamite, which is widely used in mining, quarrying, construction and warfare. Dynamite which is produced using nitroglycerin and some other absorbent material is unstable and dangerous to manufacture. He also invented the explosives gelignite and ballistite.
He laid the foundation for the formation of the Nobel Prizes by leaving a vast portion of his wealth for the establishment of an international prize fund to honor outstanding contributions in several varied fields of science and arts.
Personal Life & Legacy
He fell in love with a Russian girl called Alexandra who rejected his proposal. He later developed feelings for his secretary Bertha Kinsky with whom he had a close friendship until his death. He met Sofie Hess in 1876 and developed a relationship with her that lasted for 18 years.
He never married or had children, and was a loner who suffered from bouts of depression.
He loved literature from a young age and used to write poetry. His parents were opposed to his literary pursuits, so he never got his work published.
Lifelong he had been working in proximity to explosive substances that greatly affected his health. He died of a stroke in 1896. 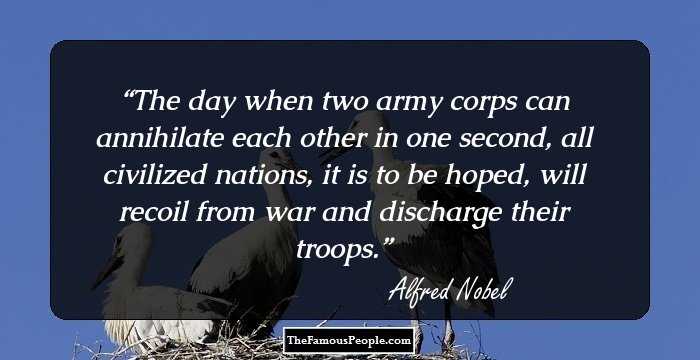 See the events in life of Alfred Nobel in Chronological Order