(Provisional President of the Republic of China (January - March 1912))

Sun Yat-sen (born Sun Deming) was a Chinese physician, revolutionary, and political leader who became the provisional first president of the Republic of China. He played a major role in the overthrow of the Qing dynasty during the Xinhai Revolution. Considered to be one of the greatest leaders of the country in the modern era, he is often called the "Father of the Nation" in the Republic of China. Despite being born into a family of humble means, he received a good primary education and went on to become a trained medical doctor. As a young man, he was drawn to revolutionary ideas and grew increasingly frustrated by the state of the conservative Qing government. He took an active part in the revolts and uprisings against the government and proceeded to play a key role in the Xinhai Revolution and the overthrow of the Qing dynasty. Despite being a much-revered figure in both mainland China and Taiwan, he faced numerous struggles in his political life and was exiled often. As a political philosopher, he is credited with developing the philosophy of the Three Principles of the People. He was married thrice. Zhao Ziyang
DID WE MISS SOMEONE?
CLICK HERE AND TELL US
WE'LL MAKE SURE
THEY'RE HERE A.S.A.P
Quick Facts

Cause of Death: Gallbladder Cancer

Sun Yat-sen was born into a family of humble means on 12 November 1866, in the village of Cuiheng, Xiangshan County (now Zhongshan City). His parents were Sun Dacheng and Lady Yang.

His father was 53 and his mother was 38 at the time of his birth. He had several siblings, a few of who died young. His father worked as a tailor, porter, and journeyman. His family also owned a little land.

He began his schooling when he was ten. After completing his primary education, he moved to Honolulu, Hawaii, where his elder brother Sun Mei lived. His brother supported him financially and paid for his education.

Sun Yat-sen studied British history, English, mathematics, science, and Christianity in ʻIolani School. A brilliant student, he was given a prize for academic achievement by King David Kalākaua.

He continued his studies at the Diocesan Home and Orphanage on Eastern Street (now the Diocesan Boys' School) and The Government Central School in Hong Kong. Around this time, he converted to Christianity.

He studied medicine at the Guangzhou Boji Hospital in 1886, under the mentorship of the Christian missionary John G. Kerr. He then enrolled at the newly-opened Hong Kong College of Medicine for Chinese and earned his medical doctor license. 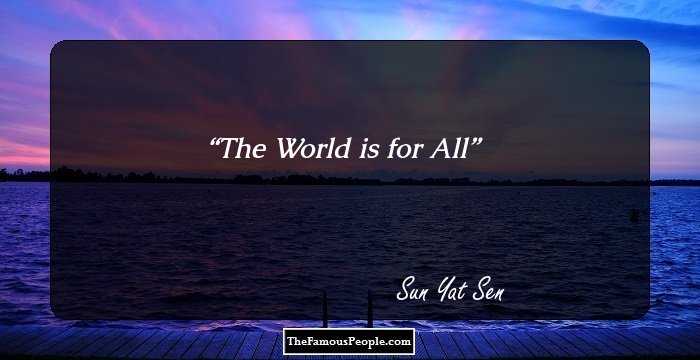 Sun Yat-sen practiced medicine for a brief period. He was more interested in political activism than in the medical field, and he joined a group of young revolutionary thinkers to form the Four Bandits in the late 1880s. The members of this group aspired to overthrow the Qing government.

In the early 1890s, he became acquainted with Yeung Ku-wan, the leader and founder of the Furen Literary Society. This meeting further strengthened Yat-sen’s revolutionary ideas.

China faced defeat in the Sino-Japanese War (1894-95). Taking advantage of the ensuing chaos, Sun Yat-sen planned and launched the First Guangzhou uprising against the Qing dynasty. However, the uprising was a failure, and he was forced to go abroad in exile.

He spent the next 16 years of his exile traveling across Europe, the United States, Japan, and Canada. He continued to plot another uprising and raised finances for the same during his exile. While in Japan, he received support from the Japanese politician Tōten Miyazaki and many others who opposed western imperialism.

Five years after the disastrous Guangzhou uprising, Sun Yat-sen launched the Huizhou uprising in 1900. This uprising also failed, and his exile continued.

Sun Yat-sen increasingly grew in popularity during the early 1900s. By 1904, he was receiving support from thousands of Chinese youngsters who opposed the Qing dynasty. He established several revolutionary cells in Europe and became the head of a revolutionary coalition, the United League (Tongmenghui), in 1905. This coalition was based in Tokyo.

He led the Zhennanguan uprising against the Qing dynasty in December 1907. This uprising failed, as did many other uprisings launched in the next several months.

In the ensuing years, revolutionary Huang Xing became very active in his fight against the Qing dynasty. He led a military uprising at Wuchang in October 1911, which expanded to the Xinhai Revolution and successfully led to the downfall of the Qing dynasty.

Sun Yat-sen was in exile during the revolution. Even though he had no direct involvement in this revolution, he had played a major role in laying the foundation for the downfall of the Qing dynasty. Upon learning of the revolution’s success, he returned to China.

On December 29, 1911, representatives from provinces held a meeting in Nanjing and elected Sun Yat-sen as the provisional president of the Republic of China. January 1, 1912, was chosen to be the first day of the first year of the republic. Huang Xing was made the minister of the army in this provisional government.

Military leader Yuan Shikai, who controlled the Beiyang Army, played a key role in getting the Qing court to abdicate. After Emperor Puyi stepped down from the throne on 12 February 1912, Yuan Shikai was made the new provisional president in Beijing, replacing Sun Yat-sen.

Yuan Shikai continued to rise in power and proclaimed himself the Emperor of China in 1915. Sun Yat-sen participated in the anti-monarchy war of the Constitutional Protection Movement.

The political situation in China was chaotic and the nation was divided among numerous regional military leaders. Sun Yat-sen advocated for Chinese reunification and launched a self-proclaimed military government in Guangzhou in 1921, becoming its grand marshal. He spent his last years working to build a unified China.

Sun Yat-sen is best known for his active revolutionary works in the years leading to the Xinhai Revolution, which resulted in the overthrow of the Qing dynasty. He was elected as the provisional first president of the Republic of China and is revered as the "Forerunner of the Revolution" in both mainland China and Taiwan.

Sun Yat-sen had an arranged marriage with Lu Muzhen when he was 20. They had one son and two daughters. He later married Kaoru Otsuki.

He was in a relationship with the Hong Kong-born Chen Cuifen and adopted a daughter with her.

He married Soong Ching-ling in 1915. Her father, Methodist minister Charles Soong, was not happy with this alliance as Yat-sen had already been married twice before.

In January 1925, he was diagnosed with cancer. He was initially treated with radium and later with traditional Chinese medicine. However, neither treatment worked, and he died on 12 March 1925, at the age of 58.