Advanced Search
Ségolène Royal is a French politician who currently serves as the president of the Poitou-Charentes Regional Council. She is also the Minister for Ecology, Sustainable Development and Energy in the Valls Cabinet. A former member of the National Assembly, she plays a prominent role in French politics and has held several ministerial positions so far in her career. An ambitious woman, she has also aimed for the president’s position and was the Socialist candidate in the 2007 French presidential election but lost to Nicolas Sarkozy. Had she won the election, she would have become France’s first female president, but it was not meant to be. Ever the resilient politician, she ran for presidency again in 2012, but lost badly in the primaries. But in spite of the ups and downs in her political career, she remains a major figure in the country’s politics. Appointed as the Minister of Ecology, Sustainable Development and Energy in the Valls government, she holds a powerful portfolio in the French political scenario. The mother of four children, she is known to campaign more on family and social issues rather than on economic or foreign policy issues, and has often been criticized for this. A beautiful and glamorous lady, she has also made the headlines because of her personal relationships Christine Lagarde
DID WE MISS SOMEONE?
CLICK HERE AND TELL US
WE'LL MAKE SURE
THEY'RE HERE A.S.A.P
Quick Facts

French People
Virgo Leaders
Women Leaders
French Leaders
French Women Leaders
Childhood & Early Life
Ségolène Royal was born as, Marie-Ségolène Royal on 22 September 1953 in the military base of Ouakam, Dakar, French West Africa (now Senegal) to Hélène Dehaye and Jacques Royal. Her father was a former artillery officer and aide to the mayor of Chamagne (Vosges). She has seven siblings.
After completing her schooling she studied economics at the École Nationale d’Administration in Paris. Here she met François Hollande, a classmate, who would eventually become her partner and a famous politician himself. Around this time she also dropped the “Marie” from her name and from then on, became known only as Ségolène Royal.
Continue Reading Below
Career
After completing her education, Ségolène Royal started working as a judge of an administrative court. While working in this position, she got noticed by President François Mitterrand's special adviser Jacques Attali, who recruited her as a chargée de mission in 1982. She held this post until 1988.
In 1988 she registered in the rural, Western Deux-Sèvres Département after deciding to become a candidate for the legislative election the same year. She was standing against an entrenched UDF incumbent. This being her first election, she was not expected to win against the incumbent, but beating all odds, she won.
Ségolène Royal served as the representative in the National Assembly for the Deux-Sèvres' 2nd constituency from 1988 to 1992.
Later on she held a number of government positions, serving as the Minister of Environment (1992–1993), Minister of School Education (1997–2000), Minister of Family and Children (2000–2001) and Minister of Family, Children and Disabled persons (2001–2002).
She rose in prominence over the years and in 2004, she was elected president of the Poitou-Charentes regional council, with more than 55% of the vote. What made her resounding victory even more significant was the fact that she defeated her opponent Élisabeth Morin who was a protégée of the Prime Minister Jean-Pierre Raffarin.
Ever the ambitious woman, Ségolène Royal set her eyes on the presidential seat. She declared in 2005 that she planned to run for the presidency in 2007, and launched an Internet-led electoral campaign at Désirs d'avenir ("Desires for the future"), publishing the first of ten chapters of her political manifesto.
She retained her National Assembly seat until 2007 and chose not to run in the legislative election, keeping up with one of her presidential campaign's promises.
She proved to be very popular during the initial months of her campaigning. Her closest competitor was former Prime Minister Lionel Jospin, and she also faced other prominent politicians like Dominique Strauss-Kahn, Jack Lang, another former Prime Minister Laurent Fabius and François Hollande.
Her status as a presidential candidate received a boost after Lionel Jospin declared that he would not run after all. Jack Lang too decided not to run, thus raising hopes of her victory.
Segolene Royal defeated Laurent Fabius and Dominique Strauss-Kahn in the French Socialist Party primary, becoming the party's candidate for the 2007 presidential election.
After the first round of the presidential election, she faced Nicholas Sarkozy in the second round of voting. In the final round of voting, Sarkozy won the election with 53% of the vote, thus shattering her presidential dreams.
Segolene Royal was in a relationship with another prominent Socialist Party member, François Hollande, which ended in 2007. Following this incident, her political career suffered. She entered the leadership election of the Socialist Party in 2008 but lost to another candidate. She blamed her former partner for the loss.
She was appointed Minister of Ecology, Sustainable Development and Energy in the Valls government in April 2014.
Personal Life & Legacy
Segolene Royal developed a relationship with François Hollande, the present President of France, during the late 1970s. The couple never got married and neither did they go for a civil union. Four children were born out of their union. Her son Thomas Hollande, served as an adviser to her during her presidential candidacy. The couple reportedly split in 2007.

See the events in life of Ségolène Royal in Chronological Order 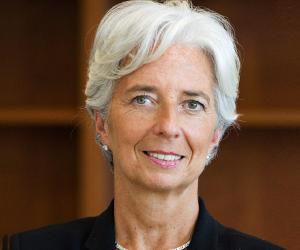