Samuel Pepys was an English naval administrator and Member of Parliament who is most known for the diaries which he wrote from 1660 to 1669. Born in London, the son of a tailor, he was educated at a local school and later completed his graduation from the prestigious Cambridge University. Subsequently, he was employed secretary to Edward Montagu, 1st Earl of Sandwich. On January 1, 1660, Pepys started writing his most famous diary; his writings range from private revelations to major political events of the era. His entries contain thorough descriptions of the major events of 17th century England including Great Plague of London, the Second Dutch War, and the Great Fire of London. In 1669, however, due to fear of losing his eyesight, he was prompted to stop writing the diary although he never actually went blind. In his long and eminent career, he was appointed clerk of the Acts to the Navy Board and later also served as the Secretary to the Admiralty as well as a Member of Parliament. He was responsible for some important naval reforms which helped lay the foundations for a professional naval service. He was also arrested twice on account of treason suspicions but was subsequently cleared of all charges. With the overthrow of James II, Pepys’ career also came to an end and upon spending his last years in complete solace, Pepys died peacefully in his homeland Boris Johnson
DID WE MISS SOMEONE?
CLICK HERE AND TELL US
WE'LL MAKE SURE
THEY'RE HERE A.S.A.P
Quick Facts

British People
Non-Fiction Writers
British Men
Cambridge University
Male Writers
Childhood & Early Life
Samuel Pepys was born on February 23, 1633, in Salisbury Court, Fleet Street, London, to John Pepys, a tailor, and his wife, Margaret Pepys, daughter of a Whitechapel butcher.
Pepys was the fifth of eleven children but because of high child mortality rate, he soon became the oldest survivor in his family. He was baptized at St Bride's Church and went to Huntingdon Grammar School before attending St Paul's School, London.
In 1650, he was enrolled at Cambridge University and was later admitted as a sizar to Magdalene College. In 1654, he completed his graduation with Bachelor of Arts degree. 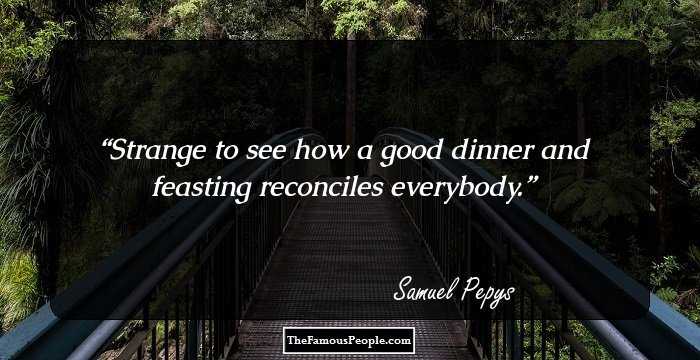 Continue Reading Below
Career
In 1655, Samuel Pepys was appointed as drudge in the Whitehall lodgings of his father’s cousin, Sir Edward Montagu, 1st Earl of Sandwich.
In mid-1658, Pepys worked as a teller in the Exchequer under Sir George Downing, 1st Baronet.
With Montagu’s influence at court, Pepys was appointed the clerk of the Acts to the Navy Board and was provided an official residence in the navy office. While working there, Pepys started writing his diary on January 1, 1660, at the age of 26.
He served in the Royal Navy with full devotion and dedication which became realized during the years of Second Dutch War. He remained at his post throughout the plague of 1665, and saved the navy office in the Great Fire. His diaries are most famous for his eyewitness accounts of major events such as the Great Plague, the Second Dutch War, and the Great Fire of London.
Throughout the period of the diary, Pepys's health suffered from the long hours he worked. He wrote his last entry on May 31, 1669, where he reluctantly concluded that, for the sake of his eyes, he could no longer keep his diary.
In 1672, he was selected as an Elder Brother of Trinity House where he served until 1689.
In 1673, he was promoted to Secretary to the Admiralty Commission and was later also elected as Member of Parliament for Castle Rising in Norfolk.
In May 1679, Pepys was arrested on suspicion of treasonable activities and was placed in the Tower of London. Later, he was released in July 1679 and the charges were subsequently dropped.
In June 1684, he became the King's Secretary for the affairs of the Admiralty, a post he retained after the death of Charles II and the accession of James II.
Continue Reading Below
Between 1685 and 1688, he served as Secretary for the Admiralty in addition to being an MP for Harwich.
In 1688, when James II fled the country, Pepys's career also came to an end. Later, he was again arrested on suspicion of Jacobite tendencies but was released after a while. Ultimately, he retired from public life at the age of 57. 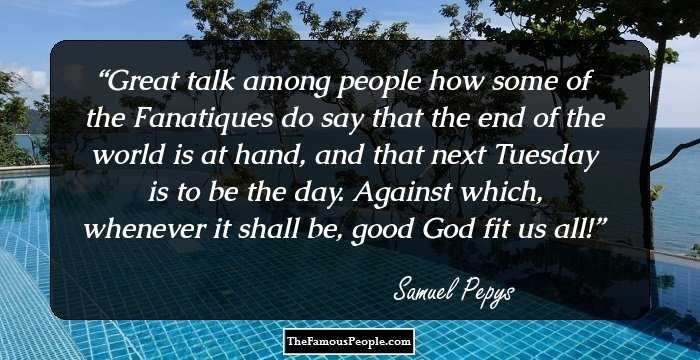 Quotes: God
Major Works
He carefully nurtured his large collection of books, manuscripts, and prints all his life. After his death, there were more than 3000 volumes, including his diary, all carefully catalogued and indexed which form one of the most important surviving 17th century private libraries.
Awards & Achievements
From 1684 to 1686, he served as the President of the Royal Society. 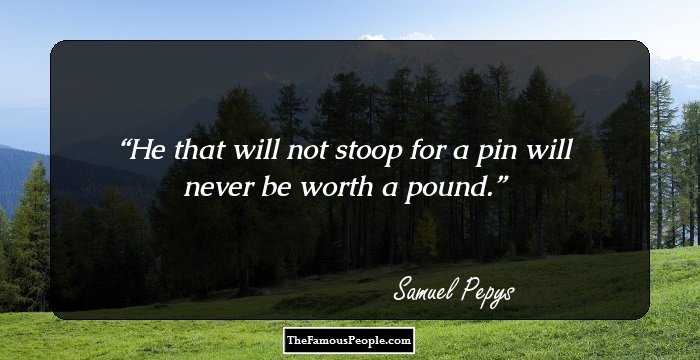 Quotes: Never, Will
Personal Life & Legacy
From a young age, Pepys suffered from bladder stones in his urinary tract which worsened over the years.
In 1655, Pepys married Elisabeth de St Michel, a 14-year-old girl, descendant of French Huguenot immigrants. The couple had no children.
In 1657, Pepys underwent surgery and the stone was successfully removed. However, there were long-term effects from the operation and the incision on his bladder broke open again late in his life.
In 1669, Pepys and his wife went on a vacation but upon their return, Elisabeth fell ill and subsequently died. Although Pepys never got married again, he did have a long term housekeeper, Mary Skinner, who many thought was his mistress.
Samuel Pepys died on May 26, 1703, in Clapham, on the outskirts of London. He had no children and gave his estate to his unmarried nephew, John Jackson.
Recommended Lists:
Miscellaneous #854
Leaders #620

Quotes By Samuel Pepys | Quote Of The Day | Top 100 Quotes

See the events in life of Samuel Pepys in Chronological Order