Advanced Search
Salvador E. Luria was an Italian microbiologist who jointly won the Nobel Prize in Physiology or Medicine in 1969 with Max Delbrück and Alfred Hershey, for their discoveries on the replication mechanism and the genetic structure of viruses. Born in Turin, Italy, into an influential Jewish family, he attended the medical school at the University of Turin following which he served as a medical doctor in the Italian army for some time. He then proceeded to study radiology at the University of Rome where he developed an interest in bacteriophages—viruses that infect bacteria. A brilliant student, he received a fellowship to study in the United States. Italy at that time was under the fascist regime of Benito Mussolini which banned Jews from academic research fellowships. Frustrated, he moved to Paris, France. It was a politically chaotic period in Europe and the Nazi German armies invaded France in 1940, forcing Luria to escape to the United States. He continued his research in the US and soon met Delbrück and Hershey with who he conducted many experiments, including the seminal work which earned the trio the Nobel Prize. He eventually became a naturalized American citizen. Throughout his career, Luria was an outspoken political advocate and vehemently opposed war and nuclear weapon testing. Thomas Henry Hu...
DID WE MISS SOMEONE?
CLICK HERE AND TELL US
WE'LL MAKE SURE
THEY'RE HERE A.S.A.P
Quick Facts

Italian Celebrities
Italian Men
Leo Scientists
Male Scientists
Male Biologists
Childhood & Early Life
He was born Salvatore Edoardo Luria, in Turin, Italy, on August 13, 1912. His parents Ester (Sacerdote) and Davide Luria hailed from an influential Italian Sephardi Jewish family.
He went to the medical school at the University of Turin where he became acquainted with two other future Nobel laureates: Rita Levi-Montalcini and Renato Dulbecco. He graduated with an M. D. summa cum laude in 1935.
He served in the Italian Army as a medical officer during 1936-37 following which he enrolled for classes in radiology at the University of Rome. It was here that he developed an interest in bacteriophages—viruses that infect bacteria—and conducted genetic theory experiments on them.
In 1938, he received a fellowship to study in the United States. At that time Italy was reeling under the fascist regime of Benito Mussolini which prohibited Jews from academic research fellowships.
Frustrated at being denied this chance, Luria left Italy for Paris, France. The chaotic situation in Europe continued and the Nazi German armies invaded France in 1940. Luria was now forced to flee France as well. Fortunately he was able to receive an immigration visa to the United States.
Continue Reading Below
Career
After arriving in the United States he changed the spelling of his name to Salvador Edward Luria. He was acquainted with the physicist Enrico Fermi who helped Luria receive a Rockefeller Foundation fellowship at Columbia University.
He met Max Delbrück and Alfred Hershey over the course of his research and the trio performed experiments at Cold Spring Harbor Laboratory and in Delbrück's lab at Vanderbilt University.
Delbrück introduced Luria to the American Phage Group, an informal scientific group dedicated to the study of viral self-replication. Luria was successful in obtaining one of the electron micrographs of phage particles while working with a member of the group.
Luria and Delbrück formed a very fruitful professional collaboration. In 1943 they performed what became known as the Luria–Delbrück experiment which demonstrated that in bacteria, genetic mutations arise in the absence of selection, rather than being a response to selection.
From 1943 to 1950 he served as the Instructor, Assistant Professor, and Associate Professor of Bacteriology at Indiana University. Luria became a naturalized citizen of the United States in January 1947.
In 1950 he was appointed Professor of Microbiology at the University of Illinois at Urbana–Champaign. In the 1950s he discovered that a culture of E. coli was able to significantly reduce the production of phages grown in other strains.
He took over the chair of Microbiology at the Massachusetts Institute of Technology (MIT) in 1959. During the later years of his career he shifted his research focus from phages to cell membranes and bacteriocins, and discovered that bacteriocins impair the function of cell membranes by forming holes in the cell membrane.
In 1964 he became Sedgwick Professor of Biology at the MIT and in 1972 he was appointed chair of The Center for Cancer Research at MIT.
A prominent political advocate throughout his career, he opposed nuclear weapon testing and was a detractor of the Vietnam War. His political activities led to his being blacklisted from receiving funding from the National Institutes of Health for a short time in 1969.
He was the Editor or Member of the Editorial Board of several journals including ‘Journal of Bacteriology’, ‘Journal of Molecular Biology’, ‘American Naturalist’, and ‘Proceedings of the National Academy of Sciences.’ He also authored a college textbook, ‘General Virology’ (1953), and a popular text for the general reader, ‘Life: The Unfinished Experiment’ (1973).
Major Works
Working along with Delbrück he made significant discoveries on the replication mechanism and the genetic structure of viruses, and showed that bacterial resistance to viruses (phages) is genetically inherited. Luria also proved the existence of spontaneous phage mutants.
Awards & Achievements
Salvador E. Luria along with Max Delbrück and Alfred D. Hershey was jointly awarded the Nobel Prize in Physiology or Medicine in 1969 "for their discoveries concerning the replication mechanism and the genetic structure of viruses".
Luria and Delbrück were jointly awarded the Louisa Gross Horwitz Prize for Biology or Biochemistry in 1969.
He received the National Medal of Science in 1991.
Personal Life & Legacy
Salvador E. Luria married Zella Hurwitz in 1945. His wife was a Professor of Psychology at Tufts University. They had one son, Daniel, who went on to become an economist.
He died of a heart attack on February 6, 1991, aged 78.

See the events in life of Salvador Luria in Chronological Order 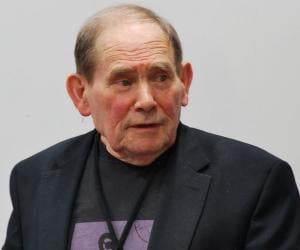