Salvador Allende, the former president of Chile who served from 1970 to 1973, was the first Marxist to be democratically elected the president of a Latin American country. Basically a physician by profession, Allende’s involvement in Chilean politics dates back to 1933 when he co-founded a section of the Socialist Party of Chile and became its chairman. His interest in politics was apparent form his college days when as a medical student he was arrested multiple times for participating in radical politics. He unsuccessfully ran for presidency in 1952, 1958 and 1964 before finally winning the open elections in 1970 to become the first democratically elected socialist president of Chile. The country was in the throes of severe economic crises when Allende came to power. Socio-economic problems like unemployment, inflation and malnourishment were rampant in the country at that time. As president, he tried to build a socialist society by bringing about nationalization of industries and by adopting a policy of collectivism. He introduced a wage increase of around 40% while forbidding companies from hiking prices. He also restored diplomatic relations with China, Cuba and the German Democratic Republic. However his enthusiasm for socialism strained his relations with business houses and many other politicians. In spite of having the support of the farmers and the common man, his government was overthrown in September 1973 by a military coup. Narendra Modi
Political Leaders #192
Leaders #269
DID WE MISS SOMEONE?
CLICK HERE AND TELL US
WE'LL MAKE SURE
THEY'RE HERE A.S.A.P
Quick Facts

Chilean Celebrities
Chilean Men
Male Leaders
Cancer Leaders
Chilean Leaders
Childhood & Early Life
Salvador Allende was the son of Salvador Allende Castro and Laura Gossens Uribe, and was of Belgian and Basque descent. His family had a long history in both the medical profession and politics.
He attended high school at the Liceo Eduardo de la Barra in Valpara�so. He then went to the University of Chile from where he obtained his medical degree in 1933. He criticized Cesare Lombroso's proposals in his doctoral thesis ‘Crime and Mental Hygiene’. 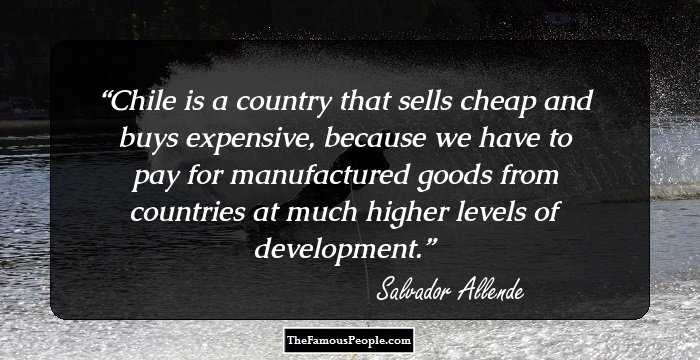 Famous Beautiful Women With Green Eyes
Career
His political career began in 1933 when he co-founded The socialist Party of Chile with Colonel Marmaduque Grove, Oscar Schnake, Carlos Alberto Mart�nez, and others. Allende became its first chairman.
In 1938, he was in charge of the electoral campaign of the Popular Front whose slogan was “Bread, a Roof, and Work”, which was victorious. He was appointed as the Minister of Health of the reformist government under President Pedro Aguirre Cerda.
He brought about a range of social reforms which included higher pensions for widows, free school lunch programmes, maternity care, safety laws for factory workers, etc.
In 1941, the Popular Front was renamed Democratic Alliance, and Allende was elected its deputy.
He served as the senator for several provinces from 1945 till 1969. He introduced legislation for establishing the Chilean National Health service.
He ran for the office of the president thrice unsuccessfully (in 1952, 1958, and 1964). He became president of the Chilean Senate in 1966.
He again ran for presidency in 1970 elections, and won as leader of the Unidad Popular coalition. He secured 36.6% of the total vote while his closest contender Jorge Alessandri of the National Party secured 35.29%. Since no candidate obtained an absolute majority, a further vote by the National Congress was required in which Allende was confirmed as the winner.
At the time he over took the office, the government was facing serious socio-economic problems with the inflation skyrocketing at 30% and more than 50% of children suffering form malnutrition.
Allende enthusiastically began implementing what was called ‘The Chilean Path to Socialism’. Wage hikes of up to 40% were introduced, and many large scale industries and banks were nationalized.
Continue Reading Below
He took steps to revitalize the education system, health care, and government administration. He wanted to improve the socio-economic conditions of Chile’s poorest people by providing more employment opportunities.
Allende became popular among the common people as a result of his reforms, but there were many other parties that were against his radical socialist policies. He faced strong opposition from businessmen, landlords, civil servants, and politicians. Chile government’s relations with the U.S were also becoming strained.
In 1973, a military coup led by Augusto Pinochet overthrew Allende’s government and Pinochet officially too over the presidency in 1974. 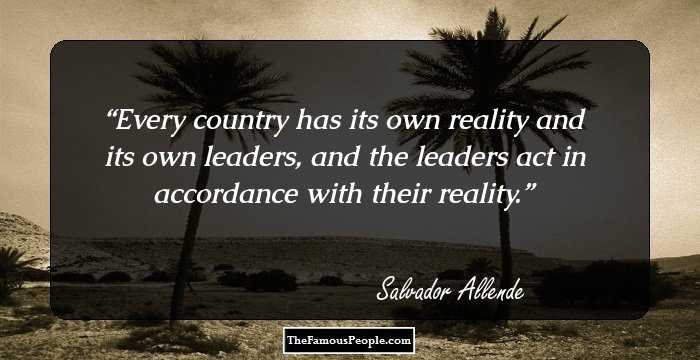 Major Works
On assuming power in 1970, Allende introduced many reformist policies to restructure the Chilean economy. He revamped the educational system with the help of an U.S educator Jane A. Hobson-Gonzalez and announced 3000 scholarships to Mapuches children.
He sponsored programmes to distribute free grains to the country’s needy and to provide free milk to nursing mothers and school going children.
He carried out modifications on the wages and salaries system, announcing a hike of up to 40% in wages. Taxes on modest incomes and properties were eliminated and the minimum level of taxable income was raised.
He launched a campaign against illiteracy and expanded adult education programmes and provided educational opportunities for workers. From 1971 to 1973, there was a marked increase in the enrollment of students in schools all over Chile.
Improved health and sanitation facilities were provided in rural, low-income neighborhoods. Additional hospitals, maternity clinics and health centers were established.
The Women’s Secretariat was established in 1971 to improve the social and economic conditions for women. It dealt with issues like health care, public food programmes, day-care centers, etc.
Personal Life & Legacy
He married Hortensia Bussi, a librarian, in 1940 with whom he had three daughters. Two of his daughters also became politicians.
During the Chilean coup of 1973, which overthrew his government, Allende gave a passionate farewell speech on live radio, speaking of his love for Chile. Later it was announced that he had committed suicide by shooting himself. His wife and daughters went into exile in Mexico after Allende’s death. 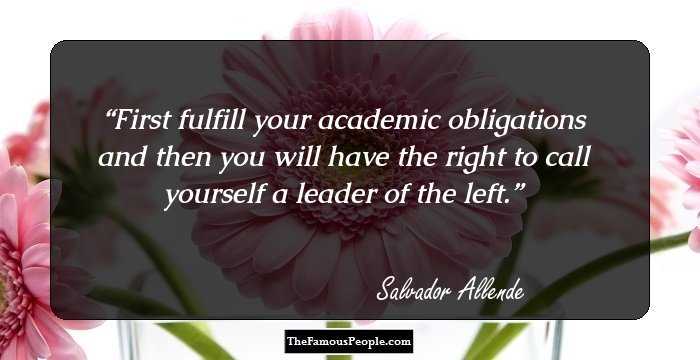 Trivia
He reportedly shot himself with a rifle given to him by Fidel Castro.
There was considerable controversy regarding the circumstances of his death as some claimed that he had been assassinated. Later studies proved that it was indeed a case of suicide and not assassination.
One of his daughters also committed suicide.
You May Like

Quotes By Salvador Allende | Quote Of The Day | Top 100 Quotes

See the events in life of Salvador Allende in Chronological Order 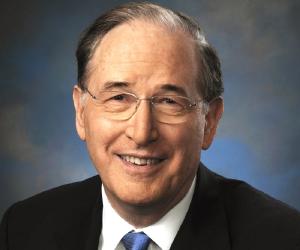 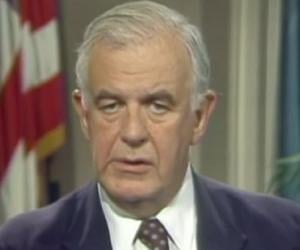