Francis Xavier was a Basque Roman Catholic Missionary and a co-founder of the Society of Jesus. He was born as Francisco de Jasso y Azpilicueta in Navarre into a prosperous family. He had a happy childhood until the age of nine when his father passed away. He received his early education from his mother and a parish priest and later left home to pursue his studies at the University of Paris. He met Ignatius of Loyola in 1529, who was a roommate and was 15 years elder to him. After several dialogues with Ignatius who had undergone a religious conversion, Xavier became one of the first seven Jesuits to undertake the vows of poverty and chastity, and also pledged his allegiance to the Pope. The friendship between Ignatius and Xavier was the one for a lifetime. Francis Xavier achieved priesthood in 1537 and on the Pope's order he became the first foreign missionary to visit India. After landing in Goa, he started learning the local language. He began preaching, attending to the sick and teaching children. His work was notable and he enjoyed reasonable success, but found hardships while trying to convert the Brahmins. After India, he visited Indonesia, Malaysia, and Japan. He then decided to visit China, but fell ill before reaching the mainland and died. Francisco Franco
7th April In History
DID WE MISS SOMEONE?
CLICK HERE AND TELL US
WE'LL MAKE SURE
THEY'RE HERE A.S.A.P
Quick Facts

Spanish People
Spanish Men
University Of Paris
Aries Leaders
Male Leaders
Childhood & Early Life
Francis Xavier was born on April 7, 1506 at the castle of Xavier in the Kingdom of Navarre, to Juan de Jasso y Atondo and Dona Maria de Azpilcueta y Aznarez. The family was one of the most prosperous in the kingdom.
Francis Xavier’s father died in 1515, and Francis was taught by his mother and a parish priest in his early years. He spoke Basque and Spanish.
In 1525, he went to the College Sainte-Barbe at the University of Paris for further studies. Little did he know that he would never see his home or family again.
He shared his room with Pierre Favre and Ignatius of Loyola. Ignatius converted several students to priesthood and after several attempts Francis was the last to acquiesce.
In 1530 after receiving the degree of Master of Arts, he started teaching Aristotelian philosophy at the Beauvais College.
In August 1534 Francis, Ignatius, Alfonso Salmeron, Diego Lainez, Nicolas Bobadilla, Peter Faber and Siamo Rodrigues met in a crypt beneath the church of Saint Denis, Paris, and made the private vows of poverty, chastity and obedience to the Pope. Francis Xavier was ordained in 1537. 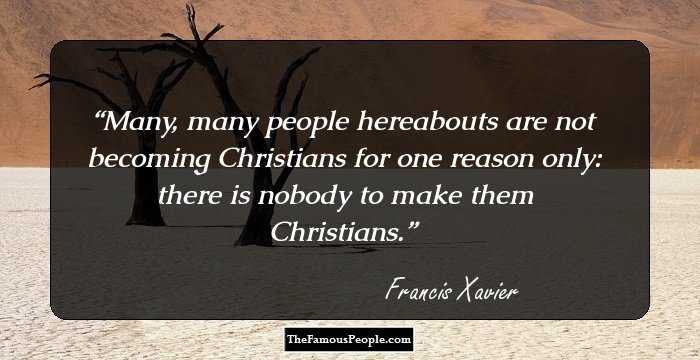 Famous Beautiful Women With Green Eyes
Later Life
In 1540, the King of Portugal requested the Pope Paul III to bestow upon him priests to spread the faith in his new Indian possessions. Hesitantly the Pope sent Francis Xavier and he became the first Jesuit missionary.
He left Rome on March 15, 1540 and reached Lisbon in June 1540. There the missionaries had a private audience with the King and the Queen. The Pope declared Francis the apostolic nuncio for the East and he left Lisbon on April 7, 1541 and arrived in India on May 6, 1542.
Francis Xavier witnessed that there were few preachers and no priests beyond Goa. He began by teaching children and aiding the sick in hospitals. He headed the Saint Paul's College, the first Jesuit headquarter in Asia.
He sailed to Cape Comorin in October 1542 as he learned that the Paravas residents had been baptised 10 years ago but knew nothing about the religion. He learned the native language and began preaching; however, he found no success in preaching to the high-caste Brahmins.
He remained in the Indian coastal regions for the next three years. He also went to Sri Lanka to convert people. During this period he built a total of 40 churches.
He reached Japan on July 27, 1549 and in September he met the hospitable Shimazu Takahisa, the daimyo of Satsuma. Everything went well until Xavier began talking about conversion. On this, the daimyo forbade the conversion of his subjects to Christianity.
He found converting Japanese people extremely hard as the language was too difficult to learn and the natives could not grasp the concept of hell.
He found some success with the Shingon monks as he referred to his Christian god as Dainichi. But when the monks realised that their guest was a preacher of a rival religion, they detested him and became aggressive.
He stayed in Japan for two more years and saw congregations being formed in Hirado, Yamaguchi and Bungo. Being the first missionary he laid the founding stone for his successors.
Continue Reading Below
In 1552 he left aboard the Santa Cruz for China. After a few months he reached the Chinese island of Shangchuan and a man agreed to take him to mainland China for a large sum of money. 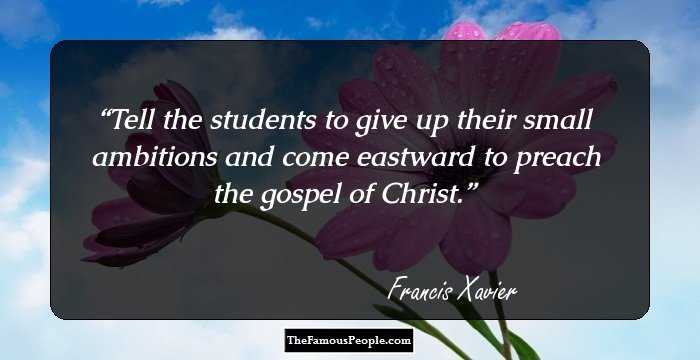 Awards & Achievements
Francis was the first Jesuit missionary to visit India and Japan.
Paul V beatified Francis Xavier on October 25, 1619 and Gregory XV canonized him on March 12, 1622.
Personal Life & Legacy
Francis Xavier passed away on December 3, 1552 after suffering from a fever. He was in Shangchuan and was waiting to be taken to mainland China.
His body was first buried in Taishan, Guangdong. Then it was transported to St Paul's Church in Malacca and on December 11, 1553 it was shipped to Goa and is now in the Basilica of Born Jesus.
His baptizing (right) hand was detached in 1614 by the Superior General Claudio Acquaviva and put on display at the Jesuit church in Rome.
The alumni of Wah Yan College, a Jesuit high school in Hong Kong, helped to restore the Xavier Tomb Monument and Chapel in Shangchuan in 2006, after years of neglect under the communist rule. 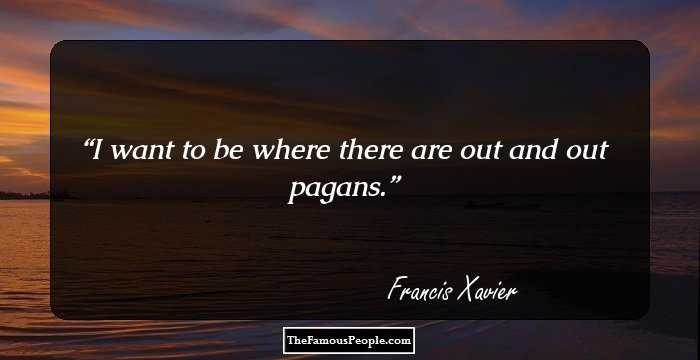 Quotes By Francis Xavier | Quote Of The Day | Top 100 Quotes

See the events in life of Francis Xavier in Chronological Order