Advanced Search
Rutherford B. Hayes was the 19 President of the United States; he was in the office from 1877 to 1881. His administration saw the end of the post-Civil War Reconstruction and he is credited to have restored the citizens’ faith in presidency through his efforts to curb the corruption that had become rampant in the government. A lawyer by profession, he had completed his legal education from the Harvard Law School before opening his own law business in partnership with William K. Rogers and Richard M. Corwine. He soon gained prominence as a criminal defense attorney, and as a strict abolitionist, he also defended slaves who had escaped and were accused under the Fugitive Slave Act of 1850. He served in the army during the Civil War and rose to the rank of major general. The Republicans were much impressed by Hayes’ anti-slavery stance and requested him to become the presidential nominee. He successfully ran for presidency as a Republican against Democrat Samuel Tilden in 1876 and assumed office on March 4, 1877. As the president, he oversaw the end of the Reconstruction and was steadfast in his commitment to civil service reforms. He retired after one term and became an advocate of social and educational reforms American People
American Men
Kenyon College
Harvard University
Libra Leaders
Childhood & Early Life
Rutherford Birchard Hayes was born in Delaware, Ohio, on October 4, 1822. His parents were Rutherford Hayes, Jr., a storekeeper, and Sophia Birchard. His father died a few weeks before Rutherford was born. His mother raised him and his sister with the help of relatives.
He received his early education from the Methodist Norwalk Seminary in Norwalk, Ohio, and a preparatory school in Middletown, Connecticut. Then he joined Kenyon College in Gambier from where he graduated with highest honors in 1842.
He decided to become a lawyer and studied at the Harvard Law School. He completed his graduation and was admitted to the bar in 1845. 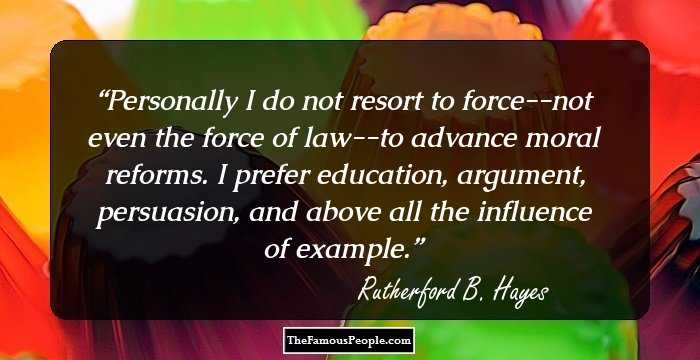 Quotes: I
Continue Reading Below
Career
He moved to Cincinnati in 1850 and over the ensuing years, established a flourishing law practice in partnership with William K. Rogers and Richard M. Corwine.
Initially he dealt primarily with commercial issues, but over a period of time gained a reputation as a criminal defense attorney. Hayes was a staunch abolitionist, and often defended escaped slaves who were accused under the recently enacted Fugitive Slave Act of 1850. During this time he also became associated with the newly created Republican Party.
The American Civil War broke out in 1861, and Hayes enlisted in the army. As an army officer he gained much respect for his bravery as he was wounded five times while fighting. He was ultimately promoted to the rank of major general.
After the war he was elected to the U.S. Congress as a Republican in 1865. After two years he left Congress to run for Governor of Ohio. A popular Congressman and a former army officer, Hayes easily won the gubernatorial election in 1867.
As the Governor, he oversaw the establishment of a school for deaf-mutes and a reform school for girls. He was re-elected in 1869 and in his second term, he campaigned for equal rights for black Ohioans. After his second term ended in 1872, he chose to retire from active politics.In 1875, Rutherford was again nominated as Republican party’s nominee for the Governor of Ohio. He won the election by defeating the Democratic nominee William Allen.
He proved to be very successful as the Governor of Ohio, and this in turn made him one of the top most Republican politicians in the country. The Republicans decided that Hayes should run for presidency in 1876. His opponent was Democratic nominee, Samuel Tilden, the Governor of New York.
Both Hayes and Tilden were much respected politicians, each known for his honesty and principles. The election was a controversial one and after months of uncertainty, Hayes was declared the winner.
He assumed office on March 4, 1877. Upon becoming the president, he immediately started implementing steps to end Reconstruction. At that time, only two states were still under the process of military Reconstruction and by withdrawing federal troops from the states still under military occupation, he brought an end to the era of Reconstruction (1865–77).
He attempted to reform the system of civil service appointments. Hayes was of the belief that federal jobs should be awarded by merit according to an examination that all applicants would take instead of being given to political supporters.
He faced a major political crisis in the form of the Great Railroad Strike of 1877, in which workers from the Baltimore & Ohio Railroad walked off the job in Martinsburg, West Virginia, to protest against the frequent reduction in their wages. The strike soon spread and riots began erupting all over the region. The president had to dispatch federal troops to suppress rioting and quell the strike.
Rutherford B. Hayes had announced in advance that he would be serving only one presidential term. At the end of his term in 1881, he stepped down as the president and went into retirement. He spent the rest of his life in humanitarian causes and became an advocate for educational charities. 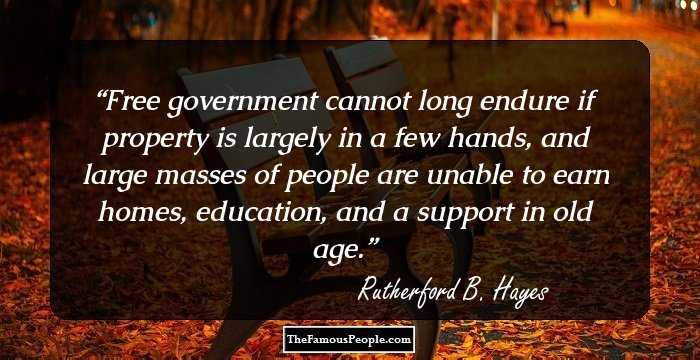 Personal Life & Legacy
As a young man he began dating Lucy Webb, the daughter of a doctor. The couple eventually married in 1852. Lucy was the first first lady to have graduated from college and was a member of Kappa Kappa Gamma sorority. The couple had a happy marriage that produced eight children.
Lucy died in 1889 and Hayes was grief stricken by the death of his beloved wife. He lived for four more years and died on January 17, 1893.
The Rutherford B. Hayes Presidential Center, a complex comprising several buildings related to the life and presidency of Rutherford B. Hayes, was opened in 1916.

See the events in life of Rutherford B. Hayes in Chronological Order