Ted Hughes was an English poet who was the Poet Laureate of England from 1984 until his death. He is considered as one of the best poets of his generation. Growing up in the valleys and moors of Yorkshire, he developed an early fascination with animals. He had a natural talent for writing, and encouraged by his teachers and elder sister, he had started writing by the age of fifteen and by sixteen he knew he wanted to be a poet. Therefore, after graduating from Cambridge, he concentrated on his poetry and at the age of 27 he released his first book of poems, which not only earned critical acclaim, but also established him as a poet. Later he started writing books for children and quickly made his mark in that field. However, his marriage to another celebrated poet Sylvia Plath was not successful and he was blamed for the latter’s suicide. Although he kept quiet for the sake of their two children, he talked about their complex relationship in ‘Birthday Letters’, a book of poems published just before his death. Today, he is ranked as one of the best poets of his generation and also one of the best writers of the 20th century. British Celebrities
Novelists
Non-Fiction Writers
British Men
Leo Poets
Childhood & Early Life
Ted Hughes was born on 17 August 1930 in Mytholmroyd, a large village within the historical subdivision of West Riding in Yorkshire. His father, William Henry Hughes, was of Irish descent. He had fought at Ypres with Lancashire Fusiliers but at the time of Ted’s birth, worked as a joiner.
Ted’s mother, Edith (née Farrar) Hughes, came from an ancient family that traced its ancestry to William de Ferrières, who came to England in the 11th century with William the Conqueror. He had two siblings. Brother Gerald was older by ten years and sister Olwyn by two years.
Ted began his education at Burnley Road School in Mytholmroyd. When he was seven years old, his family moved to Mexborough in South Yorkshire, where they ran a newspaper and tobacco shop. Here the boy entered Schofield Street junior school and later shifted to Mexborough Grammar School.
As a child, he was fascinated by animals. Growing up in the valleys and moors, he often acted as a retriever while Gerald shot small creatures like magpies, owls, curlews and rats. He also loved to fish, to draw, and collect toy animals.
At school, he was encouraged by his teachers to write. Very soon, he was drawn towards poetry and mentored by his sister Olwyn, he began to write poems from the age of fifteen. By the time he was sixteen, he had made up his mind to become a poet.
In 1946, he had his first poem published. Titled ‘Wild West’, it appeared in the school magazine called ‘The Don and Dearne.’ It also carried one of his short stories. Later, he had a few more poems published in the same magazine.
In 1948, on graduating from school, Ted won a scholarship to Pembroke College, Cambridge. However, instead of joining the college, he decided to undertake his National Service first.
Accordingly, he joined the Royal Air Force in 1949 and served as a ground wireless mechanic at an isolated post in East Yorkshire until 1951. Since he did not have much to do, he spent much of his time reading and rereading the works of Shakespeare.
In 1951, after completion of his National Service, Ted Hughes joined Pembroke College on scholarship with English as his major. However, the atmosphere of the literary circle stifled his creativity and he missed most of the lectures. Neither did he produce any poetry during this period.
Finally in the third year, he changed his subject and took up Anthropology and Archaeology. Although he did not excel as a scholar, he began writing once more. Besides, he spent a lot time studying mythology and reading the works of W. B. Yeats. 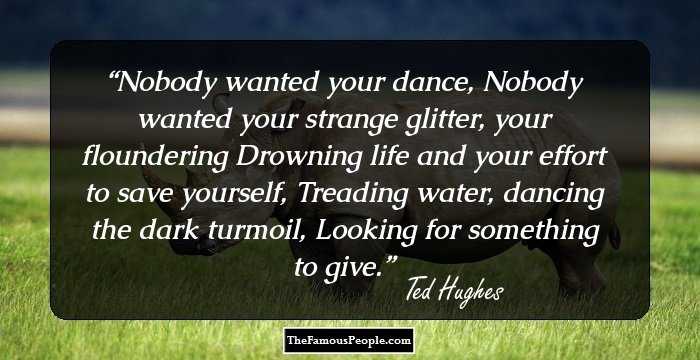 Quotes: Life
Continue Reading Below
Career
Ted Hughes graduated from Cambridge in 1954 with Anthropology and Archaeology. This was also the year that he had several of his poems published. However, during this period, he used the pseudonyms of Daniel Hearing and Peter Crew.
From 1955 to 1956, he supported himself by working as a night watchman, a gardener, a zoo attendant, a reader at a film company, and a teacher. His ultimate plan was to migrate to Australia.
Concurrently he continued with his literary pursuits and on 25 February 1956, he along with his friends threw a party to celebrate the launching of a literally magazine called ‘St. Botolph's Review.’ He was one of the six producers of the magazine, which also carried a few of his poems.
The party was attended by American poet Sylvia Plath. She had come to Cambridge on a Fulbright Scholarship and already had a few works published. Ted and Sylvia fell in love and got married on 16 June 1956. At that time, he was unaware that his new wife had a history of depression and suicide attempts.
After the wedding, the couple settled down at Cambridge, where they lived happily for one year, supporting each other in their literary pursuits. They both had poems published in acclaimed journals like ‘The Nation’, ‘Poetry’ and ‘The Atlantic.’
When in 1957, The Poetry Center’s First Publication book contest was announced, Plath persuaded Hughes to submit the manuscript of his ‘The Hawk in the Rain’. She also helped him in typing the work. Ultimately, it was awarded the first prize.
Later in September 1957, the book was released in the USA and England to much critical acclaim. In the same year, in the month of June, both of them moved to the USA, where he started teaching at the University of Massachusetts, Amherst, and at the same time continued writing.
In 1959, Hughes and Plath went on a trip across the USA. In September, they settled at the Yaddo artist colony in Saratoga Springs, New York State. But in December, it was revealed that Plath was pregnant with their first child. Therefore, they returned to England.
In 1960, immediately on his return to England, Hughes had his second book of poetry, ‘Lupercal’ published. Although most of the poems were written in the USA, they mostly centered on Yorkshire.
Continue Reading Below
Thereafter, he turned to children’s literature and in 1961, published ‘Meet My Folks!’, a collection of humorous verse for children. Based on the adventure of Granny the Octopus and Aunt Flo the Witch, it was the first of the eighteen books he would write for children.
By this time, Hughes and Plath had grown apart and in 1962, he left her for Assia Gutmann Wevill. The following year, Plath committed suicide and many held Hughes responsible for it. He bore all the attacks silently for years, never trying to defend himself.
He also destroyed the final volume of Plath’s journals, in which she had written about their last few months in details. In the foreword to ‘The Journals of Sylvia Plath’, which he published in 1982, he defended his action by saying that he did it in consideration of their two children.
In 1963 and 1964 he published three children’s books and wrote two poems, ‘The Howling of Wolves’ and ‘Song of a Rat’. Thereafter for three years, he stopped writing poems. Instead, he busied himself with the publication of Plath’s manuscripts, including ‘Ariel’ and ‘The Journals of Sylvia Plath.’
In addition, he started writing critical essays and radio plays. Sometime now, he also became involved in running Poetry International festivals with Patrick Garland and Charles Osborne.
In addition, he started writing critical essays and radio plays. Sometime now, he also became involved in running Poetry International festivals with Patrick Garland and Charles Osborne.
However, on 25 March 1969, before he could finish his collection on crows, Assia Gutmann Wevill killed herself and their child, Shura. Again the feminists held him responsible for the act and claimed that he had been abusive to both the women—Sylvia and Assia. Shocked, Hughes stopped writing poems.
Sometime in 1970, Ted Hughes married Carol Orchard. Also in the same year, he set up the Rainbow Press with his sister, Olwyn and had his poetry book, ‘Crow: From the Life and Songs of the Crow’, published by Faber and Faber.
Subsequently, he began writing once more and along with poetry, produced many books for children. When in 1976, author Michael Morpurgo and his wife, Clare, established the charity Farms for City Children, Ted Hughes became its founding President.
Continue Reading Below
He spent his last years in his home in Devon and continued with his literary pursuits. In 1998, just a few months before his death, he published his last book, a collection of eighty-eight poems, documenting his complex relationship with Plath. Titled ‘Birthday Letters’, it immediately topped the best sellers list. 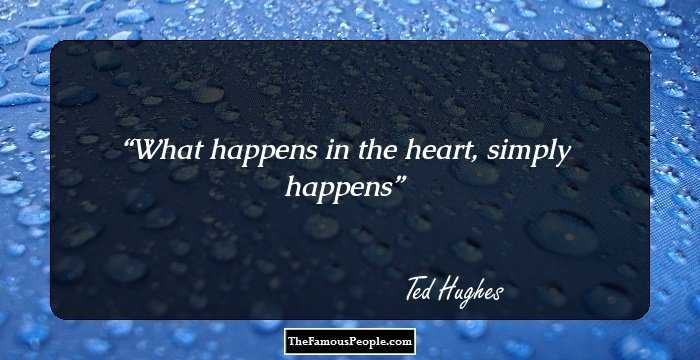 Quotes: Heart
Major Works
’The Iron Man: A Children's Story in Five Nights’ is one of his important works. Published in 1968, the book talks of a giant metal man of unknown origin, who after befriending a small boy, defends the world from monstrous aliens.
Among his book of poems, ‘Crow: From the Life and Songs of the Crow’, is considered to be one of his most important works. The poems in this book borrow heavily from mythology and some are seen as an attack on Christianity.
Awards & Achievements
In 1959, Ted Hughes won the Galbraith prize of $5,000 for his first book of poems, 'The Hawk in the Rain '. Later in 1985, he won Guardian Children's Fiction Prize for his book, ‘What is the Truth’.
In December 1984, Hughes was appointed Poet Laureate, a post he held until his death.
His last published book, ‘Birthday Letters’, won several prizes, including the Forward Poetry Prize, the T. S. Eliot Prize for Poetry and the Whitbread Poetry and Whitbread British Book of the Year prizes.
In 1998, just before he died, he was appointed a member of the Order of Merit by Queen Elizabeth II. 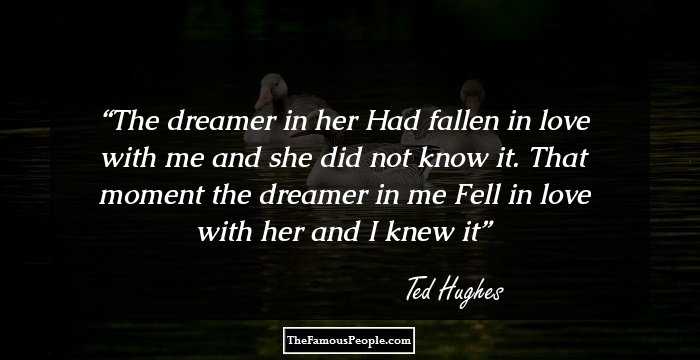 Quotes: Me, Love, I
Personal Life & Legacy
Ted Hughes had two children, Frieda and Nicholas, from his first marriage to Sylvia Plath. Frieda grew up to be a poet and a painter. Nicholas became an expert in stream salmonid ecology; like his mother, he also suffered from depression and on 16 March 2009, he committed suicide in his home in Alaska.
Ted had another daughter, Alexandra Tatiana Elise or Shura with his live-in partner Assia Wevill. Unfortunately, when Wevill committed suicide, she also killed four-year-old Alexandra.
In 1970, a year after Wevill committed suicide he married Carol Orchard, a nurse. They lived together until his death in 1998. They did not have any children.
Towards the end of his life, Ted Hughes developed colon cancer. On 28 October 1998, while undergoing treatment at a hospital in London, he had myocardial infarction and died. He was later cremated in Exeter, Devon.
In 2008, he was ranked fourth on The Times’ list of "The 50 greatest British writers since 1945."
In 2009, the Poetry Society established the Ted Hughes Award. It is an annual prize given to UK poets for their works published in the previous year.
Ted Hughes Society was established in 2010. It publishes a peer-reviewed on-line journal, containing news and articles related to Hughes, which can be downloaded by members free of cost.
In 2011, Hughes was commemorated with a memorial in Poets' Corner in Westminster Abbey.
Recommended Lists:
Writers #116

See the events in life of Ted Hughes in Chronological Order