Born In: Kingdom of Great Britain

Advanced Search
William Wordsworth was a famous English poet who played a central role in the English Romantic Movement. He is best known for ushering in the Romantic Age in English Literature with the joint publication of ‘Lyrical Ballads’ with Samuel Taylor Coleridge in 1798. He was born in Lake District, a region in North West England, known for its beautiful lakes, mountains and forests. He had a deep sense of love and appreciation for nature which was cultivated early in his life. His love for nature profoundly influenced both his personality and work. William Wordsworth was taught poetry by his father John Wordsworth, who also let his son read extensively from his own father’s library. He began his writing career by publishing a sonnet in ‘The European Magazine’. He later published his poetry collections ‘An Evening Walk and Descriptive Sketches’. Wordsworth’s meeting and his subsequent friendship with Samuel Taylor Coleridge is believed to be one of the most important happenings in the poet’s life. Wordsworth and Coleridge together produced ‘Lyrical Ballads’, the first volume of which did not give either’s name as the author. Second and third editions were soon published which included a preface to the poems. This preface to ‘Lyrical Ballads’ is considered to be one of the most important works of the English Romantic Movement. His other famous works include ‘Poems, in Two Volumes’, ‘Guide to the Lakes’, ‘The Excursion’ and ‘The Prelude’. Even though a prolific poet, Wordsworth wrote only one play, ‘The Borderers’, a tragedy. Wordsworth, inspired by his friend Coleridge, had grand ambitions to write an epic philosophical poem titled ‘The Recluse’ which he could not complete within his lifetime. Born In: Kingdom of Great Britain

John Keats
7th April In History
DID WE MISS SOMEONE?
CLICK HERE AND TELL US
WE'LL MAKE SURE
THEY'RE HERE A.S.A.P
Quick Facts

British People
British Men
Aries Poets
Male Poets
Aries Writers
Childhood & Early Life
William Wordsworth was the second of the five children born to John Wordsworth and Ann Cookson. John Wordsworth was a legal agent for James Lowther, 1st Earl of Lonsdale while Ann Cookson was the daughter of a linen-draper.
He had three brothers (Richard, John and Christopher) and one sister, Dorothy. He was the closest to his sister with whom he shared an intense and lifelong friendship.
As a child, he attended the grammar school near Cockermouth Church and Ann Birkett's school at Penrith.
After the death of his mother in 1778, he was sent to Hawkshead Grammar School in Lancashire. His father died in 1783.
The untimely deaths of both his parents meant that he was separated from his beloved sister who was sent away to live with relatives.
His mother died when he was eight. His father worked as a lawyer to James Lowther, 1st Earl of Lonsdale, a notoriously corrupt man who had earned the local nickname "Wicked Jimmy." 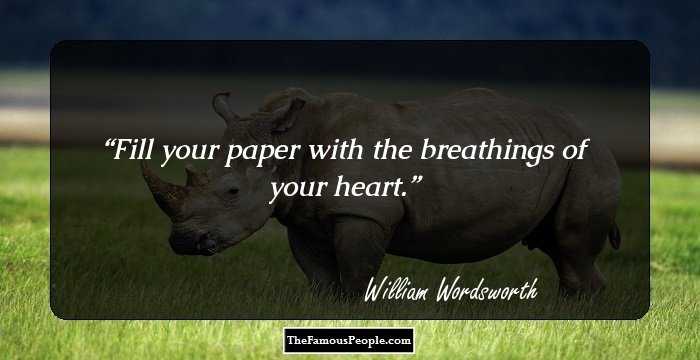 Quotes: Heart
Continue Reading Below
Career
It was during his stint at Hawkshead Grammar School that young William realized his firm love for poetry. The publication of a sonnet in The European Magazine in 1787 launched his career as a poet.
While studying at St.John’s college in Cambridge, he set out to tour Europe. This experience deeply impacted his interests and sympathies in life, sensitized him to the troubles of the common man, and had an intense influence on his poetry.
He published his poetry collections, ‘An Evening Walk and Descriptive Sketches’ in 1793, further cementing his career.
He met the poet Samuel Taylor Coleridge in 1795. It was in collaboration with him that the most significant work in the English Romantic Movement, ‘Lyrical Ballads’ was produced in 1798.
At the peak of his career, he published ‘Poems, in Two Volumes’, in 1807.
He published ‘Guide to the lakes’ in 1810 followed by ‘The Excursion’ in 1814 and ‘Laodamia’ in 1815.
‘The Prelude’, generally considered to be Wordsworth’s masterpiece, is an autobiographical poem which was published posthumously in 1850. 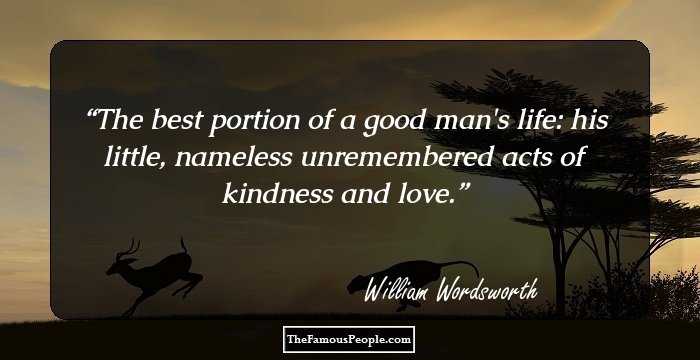 Quotes: Love
Major Works
‘Lyrical Ballads’, published with Samuel Taylor Coleridge in 1798 remains one of his major works till date. The poems in themselves are some of the most influential in Western literature, but the poet’s views as expressed in the preface to the second edition hold the honour of being the most important work of the English Romantic Movement.
Continue Reading Below
‘The Prelude’, had not even been given a title at the time of Wordsworth’s death; it was the product of a lifetime he had been working on from the time he was 28. It was ultimately named and published by his widow Mary three months after his death.
Personal Life & Legacy
As a student, he toured France and fell in love with a French Woman, Annette Vallon with whom he had a daughter, Caroline. Even though he did not marry Annette, he did his best to support his daughter.
In 1802, he married his childhood friend Mary Hutchinson. The couple had five children, three of whom predeceased their father. His sister Dorothy lived with him throughout his life.
After the death of his daughter Dora in 1847, the devastated father stopped writing poetry completely.
William Wordsworth died after a short illness on 23 April 1850.
Wordsworth’s major legacy was the introduction of a new attitude towards nature as he introduced nature imagery into his work, and presented a fresh view of the relationship between man and the natural world.
As a poet, Wordsworth delved deeply into his own sensibilities as he traced the growth of a poet’s mind in his autobiographical poem ‘The Prelude’.
Wordsworth not only created some of the finest poetry of his times, but he also placed poetry at the center of human existence, pronouncing it to be “as immortal as the heart of man.” 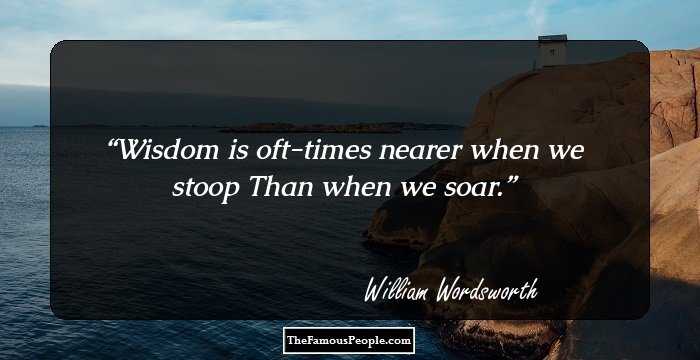 Trivia
‘The Prelude’, was intended by the poet to be an introduction to a long philosophical poem, ‘The Recluse’, which he never finished in his life time.
In 1792, he met John "Walking" Stewart, an English traveler and philosopher who had a major influence on his poetry.
He and his friends Coleridge and Robert Southey came to be known as the "Lake Poets".
He succeeded Southey as Britain’s poet laureate in 1843 and held that post until his death in 1850.

Quotes By William Wordsworth | Quote Of The Day | Top 100 Quotes

See the events in life of William Wordsworth in Chronological Order 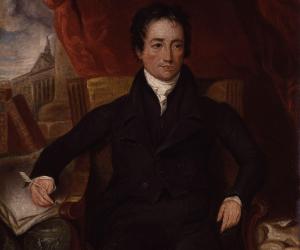