Robert B. Laughlin is an American physicist who received a share of the Nobel Prize for Physics in 1998. An expert in semiconductors, he is also known for his work on plasma and nuclear physics issues related to fusion and nuclear-pumped X-ray lasers. As a theorist, his interests range from hard-core engineering to cosmology. The son of a lawyer and a schoolteacher, he grew up in a home where intellectual discussions were encouraged. He developed an early interest in physics and experimented with the electronic gadgets at home as a young boy. So much was his love for performing experiments that he would even occasionally perform potentially dangerous ones, much to the chagrin of his parents. He graduated from the University of California at Berkeley and proceeded to earn a Ph.D. in physics from the Massachusetts Institute of Technology. He then joined the Theory Group at Bell Labs on the recommendation of his professors and began his exciting career in research. It was there that he became fascinated with semiconductors and began his collaborative work with Daniel C. Tsui and Horst L. Störmer that eventually led to the explanation of the fractional quantum Hall effect. The seminal work won the trio the 1998 Nobel Prize in physics. 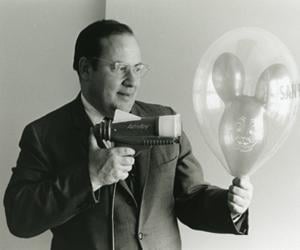 John Robert Sch...
Physicists #408
Scientists #1689
DID WE MISS SOMEONE?
CLICK HERE AND TELL US
WE'LL MAKE SURE
THEY'RE HERE A.S.A.P
Quick Facts

American People
Massachusetts Institute Of Technology (MIT)
Male Scientists
Male Physicists
Scorpio Scientists
Childhood & Early Life
Robert Betts Laughlin was born on November 1, 1950, in Visalia, California, United States, as the eldest of four children in a middle-class family. His father was a lawyer while his mother was a schoolteacher.
His parents encouraged the children to engage in debates on political topics and current issues and instilled in them a curiosity to learn more about the world. Robert was interested in science, especially physics, from a young age.
He used to dismantle and study the components of electronic gadgets and also loved to perform science experiments in the home. As a teenager he was also inclined towards natural sciences and mathematics, an interest he inherited from his father.
After schooling he joined the University of California at Berkeley where he got the opportunity to attend lectures by Nobel laureates such as Owen Chamberlain and Charles Townes. He also took an introductory course in solid state physics from Charles Kittel and Goeffrey Chew's advanced quantum mechanics course.
He graduated in 1972 and was immediately drafted into the army to serve in the Vietnam War. After being discharged from the military after two years, he entered graduate school at MIT in the fall of 1974. His time at MIT was a highly productive one and he earned a Ph.D. in physics in 1979.
Continue Reading Below
You May Like

The Best Black Actresses Of All Time
Career
Immediately after completing his doctorate, he was recommended for a position at the Theory Group at Bell Labs by his professor. It was a great opportunity for a young physicist. The Bell Labs had the reputation of being one of the best places in the US for research in solid state physics and thus provided young scientists immense scope for their research career.
Already possessing the experience of working on the theory of silicon-oxide interfaces at MIT, he was introduced to semiconductors at Bell Labs. He met and interacted with experts in the field like Daniel C. Tsui, his future collaborator.
However, he was unable to get a permanent position at Bell Labs and moved to the Lawrence Livermore National Laboratory, Livermore, California, in 1981. Meanwhile his colleagues at Bell Labs, Horst L. Störmer and Daniel C. Tsui had been experimenting with the Hall effect and observed the Hall effect at temperatures near absolute zero and under even more powerful magnetic fields.
The collective research done by Tsui and Störmer gave rise to some puzzling results. In 1983, Laughlin was able to provide theoretical explanation for these puzzling results. His findings were of phenomenal significance to the field of quantum physics and would eventually win him a share of the Nobel Prize in a few years’ time.
His growing popularity resulted in a number of job offers from several prestigious universities. Robert Laughlin accepted the post of an associate professor of physics at Stanford University in 1985. He became a full professor at Stanford in 1989.
In 1992, he became the Anne T. and Robert M. Bass Professor of Physics and Applied Physics at Stanford University, a position he currently holds.
Major Works
Best known for his work on quantum Hall effect—a quantum-mechanical version of the Hall effect—Robert Laughlin found the link between exact quantization and gauge invariance by connecting the quantized conductivity to the quantized charge transport in Thouless charge pump.
He also proposed what is now known as the Laughlin wavefunction, a many body wave function for the fractional quantum Hall effect, which was able to correctly explain the fractionalized charge observed in experiments.
Awards & Achievements
He is the recipient of many prestigious awards including E. O. Lawrence Award for Physics (1985), Oliver E. Buckley Prize (1986), National Academy of Sciences (1994) and Benjamin Franklin Medal for Physics (1998).
Robert B. Laughlin, Horst L. Störmer and Daniel C. Tsui were jointly awarded the Nobel Prize in Physics 1998 "for their discovery of a new form of quantum fluid with fractionally charged excitations."
Personal Life & Legacy
While at MIT he met Anita whom he later married. His wife is a school teacher and author, and the couple has two grown sons.
You May Like

See the events in life of Robert B. Laughlin in Chronological Order 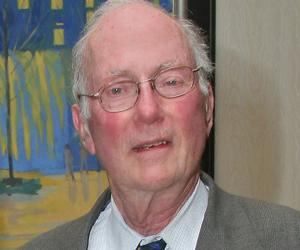