Advanced Search
Red Cloud, the war chief of the Oglala Sioux clan was a courageous leader who led his tribe in what was known as Red Cloud’s War against the U.S. Army to gain control over the Powder River Country. He played a very significant role in the battle over land between the Native Americans and the U.S. government; he was the first and also the last American Indian in the west to win a war against the U.S. Considered to be among the most capable leaders of the Native Americans, he was also one of the most ruthless—he was as much known for his cruelty as he was for his bravery. He was very courageous from his youth and was highly talented at both fighting and hunting which were essential skills for a tribal. He was also known for being shrewd and cunning while dealing with rival clans and had organized several successful raids against the enemy clans. His clan maintained peaceful relations with the white settlers till the whites discovered gold near the tribes’ land. The U.S. Army started building forts across the Lakota territory, and in a very brave attempt, Red Cloud along with other tribal chiefs engaged in a war against the white soldiers and forced the U.S. government to abandon its efforts. American Celebrities
Virgo Leaders
Male Leaders
American Leaders
American Political Leaders
Childhood & Early Life
Red Cloud was born as Mahpiya Luta to an Oglala Lakota mother, Walks As She Thinks, and a Brule Lakota chief father, Lone Man. His name literally means “Scarlet Cloud” referring to the strange formation of reddish clouds that hovered when he was born.
His father died while he was young. In the Lakota tribe, matrilineal hierarchy was followed where the children belonged to the mother’s clan. Thus he was raised by his maternal uncle Old Chief Smoke.
He learned to fight and hunt as a young boy and started showing signs of aggressive leadership from an early age. He fought against the neighboring rival clans Pawnee and Crow and scalped several enemies. 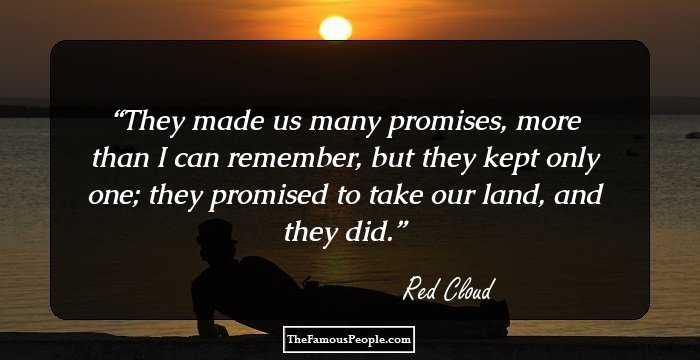 Quotes: I
Continue Reading Below
Later Years
The Oglala clan maintained peaceful relations with the white settlers up to the 1860s. During that time gold was discovered on the Montana area—an area which could be reached by the whites only by passing through the tribes’ territory—and the U.S. Army began building a road leading to the gold fields through the tribes’ lands.
The U.S. Army began building a series of forts across the Lakota hunting grounds to protect the road which became known as the Bozeman trail. This trail allowed white miners, immigrants and others directly into the buffalo feeding areas of the tribes. This was unacceptable to the tribes as the whites endangered their resources.
Red Cloud along with the other Lakota tribal chiefs was asked to sign a non-aggression treaty allowing passage across their lands from Fort Laramie to the gold fields of Montana to which he refused.
This led to the Red Cloud’s War—an armed conflict between the Lakota, Northern Cheyenne, and Northern Arapaho on one side and the U.S. Army on the other side. The war started in 1866 and lasted for two years till 1868.
In December 1866 Captain W. J. Fetterman led a troop of 80 men in an attack against a group of Sioux warriors. All the soldiers were killed and their stripped and mutilated bodies were later discovered by the U.S. Army. This incident known as the Fetterman Fight was worst military disaster ever suffered by the U.S. on the Great Plains.
Red Cloud and his warriors attacked and killed the white soldiers who tried to protect the Bozeman trail. Several members of the Sioux and Cheyennes attacked a party led by Captain James W. Powell. The soldiers, who were armed with Springfield rifles, were able to kill several tribal warriors who were equipped with only traditional weapons. However, the U.S. Army could not protect the Bozeman trail in spite of this victory.
By 1868 the U.S. government requested that the war be stopped and invited Red Cloud and other chiefs to discuss the conflict. The clans of Lakota, Northern Cheyenne and Arapaho settled for peace with the U.S. by signing the Treaty of Fort Laramie. The U.S agreed to withdraw completely from the Lakota territory in return.
The Great Sioux Reservation was established as a result of the treaty which covered parts of the West River, Nebraska and South Dakota. However, the treaty could not bring about peaceful relations between the U.S and the tribes.
The U.S. government established the Red Cloud Agency on the Platte River, downstream from Fort Laramie in 1871. As given in the treaty, the Oglala were to be supplied with periodic distributions of rations, cash, and goods. Red Cloud took his people to the agency and helped them adjust to a different way of life.
He spent the 1870s and 1880s trying to mediate peaceful relations between the Sioux and the U.S. Some of the younger Oglala still wanted to fight for their territory though Red Cloud was by now against war. He visited Washington several times to lobby for his people and help the Native Americans in bettering their lives.
Major Battles
The biggest war he led bears his name: ‘Red Cloud’s War’. It was an armed conflict which was fought between the tribes and the U.S. government over the control of the Powder River Country. He played a significant role in the Fetterman Fight in which 81 white soldiers were killed—it was the worst military defeat suffered by the U.S. on the Great Plains till then.
Awards & Achievements
He was selected for induction into the Nebraska Hall of Fame posthumously in 2000.
Personal Life & Legacy
He took only one wife in his lifetime, unlike many of the other tribal leaders who used to marry multiple wives. His wife’s name was Pretty Owl and their marriage lasted more than half a century. He was a devoted father to the several children he had with his wife.
After retiring as the tribal chief he lived in the Pine Ridge Reservation in South Dakota. During his later years he converted to Christianity and took the name ‘John’. He died in 1909 at the age of 87.

See the events in life of Red Cloud in Chronological Order