Plotinus was an ancient philosopher considered as the pioneering founder of Neo-Platonism, a philosophical movement of the Graeco-Roman world in late antiquity. He is also known as the last most famous pagan philosopher and his metaphysical writings have inspired centuries of Pagan, Christian, Jewish, Islamic and Gnostic metaphysicians and mystics. He developed metaphysics of comprehensible sources of the rational world and the human soul and told the world that the definitive cause of everything is 'the One' or 'the Good'. It is entirely simple and cannot be seized by thought or given any positive resolve. He was the true follower of Plato and considered himself as the expositor and advocator of the philosophical stance whose supreme exemplar was Plato himself. Apart from highly influencing the Western thought, he also influenced the 17th century England, medieval Islamic spirituals and medieval Indian philosophers. The philosophy of Plotinus is characterized in the complete collection of his discourses, collected and edited by his student Porphyry into six books of nine discourses each. They have been handed down to us under the title of the ‘Enneads’. Pliny the Elder
Philosophers #97
Intellectuals & Academics #129
DID WE MISS SOMEONE?
CLICK HERE AND TELL US
WE'LL MAKE SURE
THEY'RE HERE A.S.A.P
Quick Facts

Ancient Roman People
Ancient Roman Male
Male Philosophers
Ancient Roman Philosophers
Ancient Roman Intellectuals & Academics
Childhood & Early Life
Just like most of the ancient philosophers not too much is known about Plotinus’ life but because one of his disciples Porphyry had written a biography on him, therefore we know more about him than any other ancient philosopher.
Plotinus was born in Lycopolis, Egypt, in 204 or 205 C.E. Towards his late 20s, he moved to Alexandria to learn more about philosophy. He was not happy with any teacher’s teachings until he met Ammonius Saccas.
He started studying under his newly found teacher and was also influenced by the philosophical works of Alexander of Aphrodisias, Numenius and various Stoics. 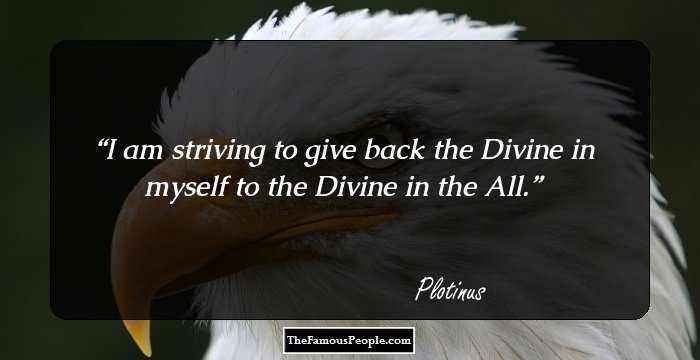 The Best Black Actresses Of All Time
Life & Work
Around the age of 38, after studying intently in Alexandria for about eleven years, Plotinus decided to take his philosophical curiosity to the Persian philosophers and Indian philosophers.
For his new pursuit, he joined the army of Gordian III, which was assigned to capture Persia but unfortunately they failed and after Gordian’s death Plotinus had to leave the place, which is why he fled to Antioch.
By the age of 40, under Philip of Arab’s sovereignty, Plotinus came to Rome and built up a circle of students, which included: Porphyry, Amelius Gentilianus of Tuscany, the Senator Castricius Firmus, Eustochius of Alexandria, Zoticus, a critic and poet, etc.
He also had students amongst the Roman Senate, like, Marcellus Orontius, Sabinillus, etc. He also had female students and lived in the house of one of his woman disciples named Gemina. He was a correspondent of philosopher Cassius Longinus.
In Rome, he became famous amongst the royal family as well; he gained the admiration of the Emperor Gallienus and his wife Salonina. He also endeavored rebuilding an abandoned settlement in Campania and called it ‘City of Philosophers’.
He spent his final days in isolation on his friend Zethos’ property in Campania. Eustochius attended him at the end and Plotinus' final words were, "Strive to give back the Divine in yourselves to the Divine in the All."
Plotinus was 66 years old when he died in 270 C.E., the second year of the reign of the emperor Claudius II.
Plotinus’ essays became ‘Enneads’ about 17 years after his death. Porphyry compiled and arranged his notes himself and before that they were just a huge collection of notes and essays that Plotinus used to use for his lectures. 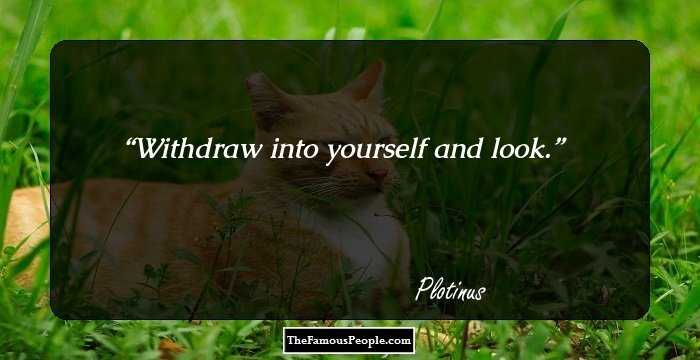 Quotes: Yourself, Beautiful
Continue Reading Below
Major Works
Plotinus is considered to be the most significant critic and interpreter of Plato, and therefore, founder of Neo-Platonism. He was also a truly novel thinker who was influenced not only by Plato, but also by the Stoics and Neo-Pythagoreans.
Trivia
There is conjecture that he may have been of a native Egyptian of Roman, Greek or Hellenized Egyptian descent.
Plotinus, like a true Platonist, was against the concept of materialism, thinking of it to be in a way a mockery of the truth and spirituality, which is why one night he refused to have his portrait painted.
He never discussed his ancestry, childhood, or his place or date of birth.
Plotinus stated that material success does not cause true human happiness, and thus “… there exists no single human being that does not either potentially or effectively possess this thing we hold to constitute happiness.” (Enneads I.4.4). His point of view on happiness is one of the greatest marks that he left on the Western thought. He was the first one to pioneer the idea that eudaimonia (happiness) is attainable only within consciousness.
He was against the idea of telling fortune through astrology.
The emperor Julian the Apostate was deeply influenced by Neo-Platonism.
Neo-Platonism and the ideas of Plotinus influenced medieval Islam.
Plotinus was the fundamental influence on the 17th-century school of the Cambridge Platonists, and on numerous writers from Samuel Taylor Coleridge to W. B. Yeats and Kathleen Raine.
Sarvepalli Radhakrishnan and Ananda Coomaraswamy used the writing of Plotinus in their own texts as an outstanding explanation of Indian monism, specifically Upanishadic and Advaita Vedantic thought. 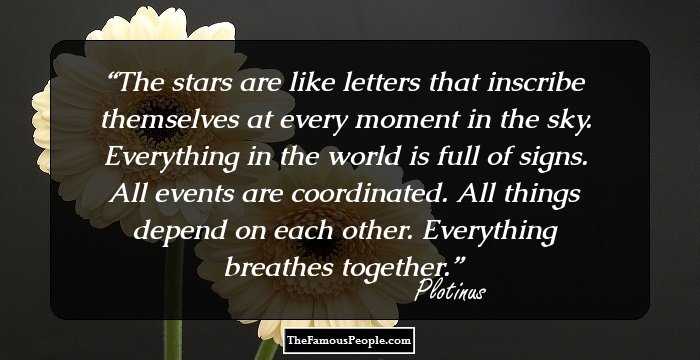 Quotes By Plotinus | Quote Of The Day | Top 100 Quotes

See the events in life of Plotinus in Chronological Order