(One of Rome's Greatest Orators of Politics and Prose Stylists)

Marcus Cicero was a Roman philosopher, politician, lawyer, orator, political theorist, consul and constitutionalist. A strong believer in the Roman Republic, he served for a short time in the army and then began his career as a lawyer. He quickly became famous for taking risky cases and winning them. He also incurred the wrath of the Roman dictator Sulla. When Cicero was quaestor for Sicily, he successfully prosecuted a case against its governor, the powerful Gaius Verres. It was during this case that he became known as the greatest orator in all of Rome. He was elected to consul, the highest position in the Roman government. During his time as consul, he blocked a threat to overthrow the Republic. He was given the title, Pater Patriae, meaning "Father of the Country", by the Senate for his brave efforts. He watched warily the rise of Julius Caesar and his ambition and following his assassination ne became an enemy of Mark Anthony in the ensuing power struggle that of Antony and eventually lost his life . His extant works include 58 orations, around 900 letters, poems, philosophical and political treatises, and books of rhetoric. He is remembered as the greatest Roman orator and the innovator of what became known as Ciceronian rhetoric, which remained the foremost rhetorical model for many centuries. Scipio Africanus
DID WE MISS SOMEONE?
CLICK HERE AND TELL US
WE'LL MAKE SURE
THEY'RE HERE A.S.A.P
Quick Facts

Ancient Roman People
Philosophers
Political Leaders
Ancient Roman Men
Male Leaders
Childhood & Early Life
Cicero was born in Arpinum, a hill town 100 km southeast of Rome. His father belonged to the equestrian order and possessed good connections in Rome. Little is known about his mother, Helvia.
According to Greek historian Plutarch, his fame as an extremely talented student enabled him to study Roman law under Quintus Mucius Scaevola while Servius Sulpicius Rufus and Titus Pomponius were his fellow-students. 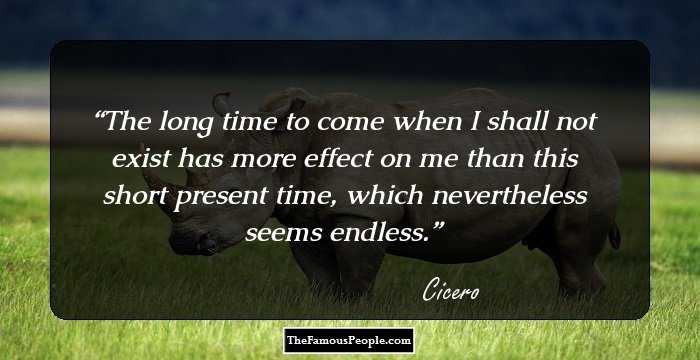 Continue Reading Below
Later Life
In 90 BC–88 BC, he served the Roman generals, Gnaeus Pompeius Strabo and Lucius Cornelius Sulla, as they campaigned in the Social War, though he had no taste for military life.
In his first major case in 80 BC, he successfully defended Sextus Roscius who was charged of patricide, a courageous move because patricide was a serious crime and the people whom Cicero accused of the murder were dictator Sulla’s favorites.
In 79 BC, he left for Greece, Asia Minor and Rhodes, perhaps fearing Sulla’s wrath. In Athens he met Atticus, who had become its honorary citizen and he introduced him to some important Athenians.
He wanted to learn a less physically exhausting style of speech and sought the help of the rhetorician Apollonius Molon of Rhodes who instructed Cicero in a less intense form of oratory.
Cicero served as quaestor in western Sicily in 75 BC and demonstrated honesty and integrity in his dealings with the inhabitants. He successfully prosecuted Gaius Verres, a corrupt governor of Sicily.
‘In Verrem’ (Against Verres), a series of speeches made by Cicero in 70 BC, during the corruption and extortion trial of Gaius Verres, thrust him into the public view.
He was able to successfully scale the Roman cursus honorum or path of honor, the sequential order of public offices held by aspiring politicians, becoming quaestor, aedile, praetor and then elected consul at the age of 43.
He was elected Consul for the year 63 BC during which he thwarted a conspiracy to assassinate him and overthrow the Republic with the help of foreign armed forces, led by Lucius Sergius Catilina.
He procured a Senatus Consultum Ultimum ,a declaration of martial law, and drove Catiline from the city with four vehement speeches (the Catiline Orations), which to this day exemplify his rhetorical style.
Continue Reading Below
Catiline fled and instigated a revolution but Cicero forced them to confess their crimes in front of the Senate. The conspirators were strangled without trial, an action that would haunt him for long.
In 60 BC, Cicero refused the invitation from Julius Caesar to join the First Triumvirate consisting of Julius Caesar, Pompey and Marcus Licinius Crassus, as he thought that would undermine the Republic.
In 58 BC, Publius Clodius Pulcher, the tribune of the plebs, introduced a law threatening exile to anyone who executed a Roman citizen without a trial. Cicero was forced into exile in Thessalonica, Greece.
After the intervention of recently elected tribune Titus Annius Milo, the senate recalled Cicero from exile. He returned to Italy in 57 BC, landing at Brundisium, greeted by a cheering crowd.
Returning from exile, he could not engage in politics and so pursued his studies of philosophy. Between 55 BC and 51 BC he wrote, ‘On the Orator’, ‘On the Republic’, and ‘On the Laws’.
The Triumvirate collapsed with the death of Crassus and in 49 BC Caesar crossed the Rubicon River, entered Italy with his army and a civil war between Caeser and Pompey ensued.
Cicero supported Pompey, halfheartedly. Unfortunately, Caesar’ forces won in 48 BC, and he became the first Roman emperor. He gave Cicero a pardon but forced him to stay out of politics.
Caesar was murdered by a group of senators on the Ides of March in 44 BC. Another power struggle ensued in which Mark Antony, Marcus Lepidus, and Octavian were the key players.
He made the series of speeches, the ‘Philippics’ ,named after the speeches the Greek orator Demosthenes made to rouse the Athenians against Philip of Macedon, calling for the Senate to aid Octavian against Antony
However, Antony, Lepidus, and Octavian agreed to share power and as part of the power-sharing deal each got to eliminate their potential enemies. Cicero, tried somewhat belatedly to flee Italy but was captured and killed. 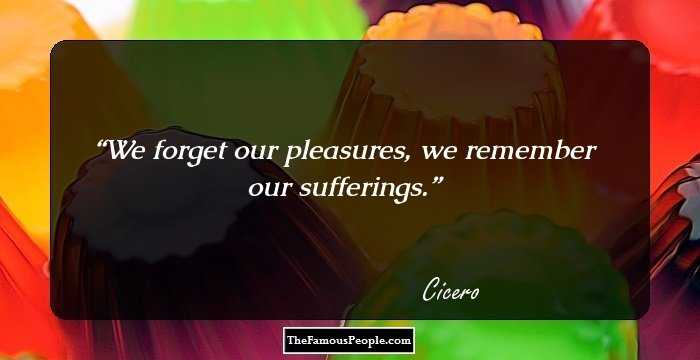 Major Works
‘On the Orator’ written by Cicero in 55 BC, is a lengthy treatise in the form of a dialogue and it places rhetoric above law and philosophy. It argues that the ideal orator would have mastered them and would possess eloquence too.
Personal Life & Legacy
Cicero married Terentia probably at the age of 27, in 79 BC, a marriage of convenience, which was harmonious for some 30 years, but ended in divorce.
In 46 BC, he married his young ward Publilia. When Cicero's daughter, Tullia, died, Publilia who had been jealous of her, was so unsympathetic over her death that Cicero divorced her.
He was killed on Mark Antony's instructions on 7 December 43 BC , when he was trying to flee Italy. 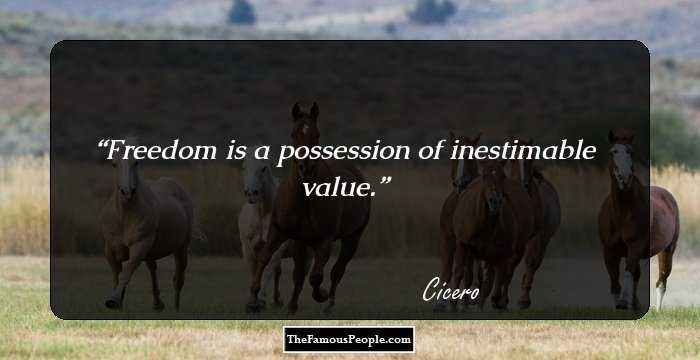 Trivia
This Roman orator declared, “The life given us, by nature is short; but the memory of a well-spent life is eternal.”
Recommended Lists:
Intellectuals & Academics #122
Leaders #118
Lawyers & Judges #21

See the events in life of Cicero in Chronological Order