Paul John Keating was the 24th Prime Minister of Australia who held the post from December 1991 to March 1996. He had been in politics for long before his career culminated in his being chosen the Prime Minister. The Keating government in Australia is credited to have ushered in a new era of economic growth that led to a higher standard of living for the citizens. Keating, who had previously served as the Treasurer had a major role to play in shaping the country’s financial system and economy. The highly intelligent politician introduced policies for building economic competitiveness and deregulating Australia’s economy. He always had an inherent interest in politics and entered the parliament when he was just 25 years of age—making him one of the youngest federal parliamentarians. He went on to be appointed the Treasurer during the Hawke Government and successfully challenged Hawke for the Labor leadership later on. After becoming the Prime Minister he implemented a succession of progressive reforms which aimed at dismantling trade barriers, regulating industries and adoption of tax reforms. He stepped down from the post in 1996 post his defeat to John Howard. He became a successful businessman after his retirement from politics. Australian People
Australian Men
Tall Celebrities
Tall Male Celebrities
Male Leaders
Childhood & Early Life
He was born to Matthew Keating and his wife Minnie. His family was Irish Catholic. His father was a leading local Labor Party member and young Paul inherited his father’s political interests.
He was educated at De La Salle College from where he obtained his Intermediate Certificate in 1958. However, he did not receive any formal education after the age of 15 and started working as a clerk at Sydney’s electricity authority.
He joined Young Labor, a group of politically inclined young people who met and discussed the current political issues. 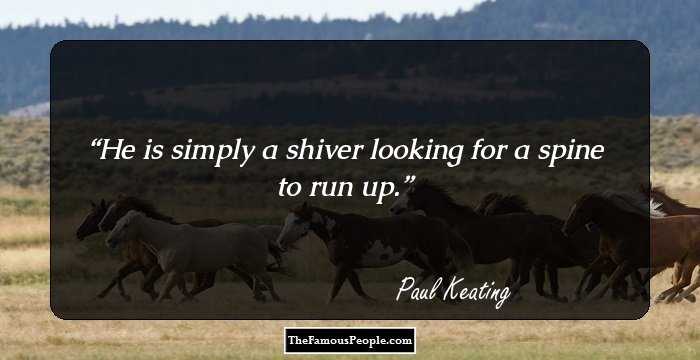 The Hottest Male Celebrities With The Best Abs
Career
He joined the Australian Labor Party (ALP) as soon as he was eligible for membership. He became president of the ALP’s Youth Council in 1966.
He came in contact with a number of major politicians of those days and with their help he gained the Labor endorsement for the seat of Blaxland and was elected to the House of Representatives in 1969.
He became the Minister for Northern Australia in the Whitlam cabinet in 1975. Soon, he was promoted to the post of an opposition spokesman in 1976 and he gained a reputation for being an aggressive debater.
In 1981, he became the President of the New South Wales Labor Party.
He was appointed the Treasurer of Australia under the Prime Minister Bob Hawke in 1983, a position he held until 1991. He implemented several macro and microeconomic reforms including the deregulation of the financial sector, taxation reforms, and dismantling of several trade barriers.
The Australian economy grew at a fast pace during the 1980s but by the end of the decade the inflation rate had reached 9%. His policies were criticized when the country experienced recession in the 1990s. Keating defended himself by saying that recession ended the inflation problem.
He challenged Prime Minister Bob Hawke in December 1991 and defeated him by 56 votes to 51. He was sworn in as the 24th Prime Minister of Australia on 20th December 1991.
He continued implementing the progressive reforms he had undertaken as the Treasurer. He established labor market and training reforms to address the problem of high unemployment Australia was facing at that time.
Some of his major achievements are: review of the Sex Discrimination Act and the establishment of the Australian National Training Authority (ANTA). His role in the setting up of the Asia-Pacific Economic Cooperation Forum (APEC) was also very significant.
He delivered the legendary Redfern Speech on Aboriginal reconciliation in December 1992. This speech is considered to be one of the greatest ever delivered in the political history of Australia.
Keating was keen on building favourable international relations with countries throughout Asia, especially China, India, Malaysia, and Indonesia and in developing bilateral trade relations with these nations.
In March 1996, the Australian Labor Party was defeated and Keating resigned as the Prime Minister. Post his retirement, he became a successful businessman and held the position of a director in various companies.
Major Works
As the 24th Prime Minister of Australia, Keating is credited to have developed better trade relations with neighboring countries; he is also credited to have brought about a higher standard of living in the country by implementing progressive training, employment, deregulation and taxation reforms.
Awards & Achievements
All the former Prime Ministers of Australia since 1975 were appointed as a Companion of the Order of Australia—an honour offered to him in 1997 which Keating declined.
Personal Life & Legacy
He married Annita van Iersel, a Dutch flight attendant in 1975 and had four children with her. The couple separated in 1998. His daughter Katherine Keating is a former adviser to New South Wales minister Craig Knowles.
Trivia
During his youth this famous Australian politician managed a rock band called The Ramrods.
He is a music lover and has the hobby of collecting antique French clocks.
You May Like

See the events in life of Paul Keating in Chronological Order