Advanced Search
Julia Gillard is a former politician of Australia who was the first woman to serve as the leader of the Australian Labor Party (ALP) and the Prime Minster of Australia. She had been active in politics from her college days until her resignation from the post of Prime Minster in 2013. Her parents had been admirers of the Welsh Labor leader Aneurin Bevan, who had helped establish Britain's National Health Service. She joined the Victorian ALP in the later 1970s and became part of its Socialist Left Faction. Gillard later commented that her experiences with the Australian Union of Students helped her learn how to negotiate, network and persuade. She had a brief career as a lawyer, during which she often represented the working poor, but she decided that she could accomplish more in politics. Throughout her political career she has worked on issues as disparate as climate change, immigration, education, water policy, information technology and disability reform. As a woman in a male-dominated field, she has had her share of rivals including Tony Abbot. She and Kevin Rudd had worked together during his first team as Prime Minister, but they became rivals as both wanted to lead the ALP Alfred Deakin
DID WE MISS SOMEONE?
CLICK HERE AND TELL US
WE'LL MAKE SURE
THEY'RE HERE A.S.A.P
Quick Facts

Australian People
Australian Women
University Of Melbourne
Libra Leaders
Women Leaders
Childhood & Early Life
Julia Gillard was born in Barry, Wales on September 29, 1961 to John Oliver Gillard and Moira Gillard (née MacKenzie.) She also has an older sister named Alison.
In 1966, her family emigrated to Adelaide, South Australia for her health after she suffered a bout of bronchopneumonia. She attended ‘Ulney High School’.
She moved to Melbourne in 1982 where she worked with the ‘Australian Union of Students’.
In 1986, she graduated from the ‘University of Melbourne’. A year later, she joined the law firm ‘Slater & Gordon’ at Werribee, Victoria, where she was later made partner at the age of 29. 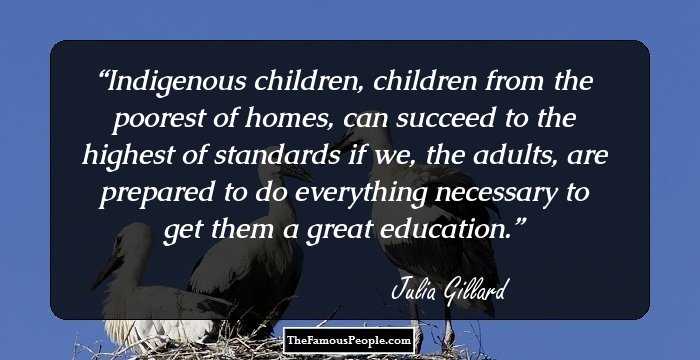 Quotes: Children
Continue Reading Below
Career
In 1995, Gillard took a hiatus from her legal career and ran unsuccessfully for the Senate as a part of the ‘Australian Labor Party’.
In 1996, she left her law firm to join John Brumby as his Chief of Staff in which capacity she drafted the Labor Party's affirmative action rules. She also helped found the Australian branch of ‘Emily's List’, an organization that supports pro-choice women who are running for office.
During the 1998 federal election, she was elected to the House of Representatives for the first time. She replaced the retiring Barry Jones as the representative of the electoral division of Lalor.
In 2001, the ‘Australian Labor Party’ lost the federal election. She was elected to the ‘Shadow Cabinet’, which consists of spokespeople for the Opposition. Each member concentrates on a specific minister or portfolio. Gillard's first responsibility was for Population and Immigration.
In 2003, she became responsible for Reconciliation and Indigenous Affairs. Fallout from two controversies, relating to immigration, the ‘Children Overboard’ and ‘Tampa’ affairs, caused Gillard to develop a new immigration policy for the ‘Labor Party’.
In July, 2003, she was promoted to the position of Shadow Minister for Health. Her counterpart in the government was Tony Abbot, and their rivalry attracted often attracted media attention.
In December 2006, she became Deputy Leader of the Opposition. She was one of the leaders of the political party that had the second-most seats in the House.
In 2007, the ‘Labor Party’ won the federal election, and Gillard became the first woman in Australian history to be sworn in as the Deputy Prime Minister. She also became responsible for the Department of Education, Employment and Workplace Relations.
As Minster of Education, she signed a deal with Arne Duncan, the US Secretary of Education. She and Duncan agreed their respective countries would work together on education reform.
Continue Reading Below
As Minster for Employment and Workplace Relations, she introduced the ‘Fair Work Bill’ which replaced the previously implemented amendments to Workplace Relations dubbed ‘WorkChoices’. The ‘Fair Work Bill’ established a tribunal called ‘Fair Work Australia’.
Gillard ran the government's ‘Building the Education Revolution’ program which devoted $16 million dollars on the construction of new facilities for Australia's schools. She also acted as Prime Minister when Kevin Rudd, the Prime Minister, was working overseas.
In 2010, Julia Gillard was elected Prime Minister herself. The Labor Party, however, had not won an absolute majority which resulted in a hung Parliament. The newly appointed Prime Minister formed a coalition with the Australian Greens and a few independents to establish a working Government.
Julia’s predecessor Rudd had tried to set up a carbon trading scheme and a "super tax", on mining company profits, of 40 percent. The Prime Minister negotiated a compromise with the mining companies that reduced the tax to 30 percent.
After a series of disastrous floods in east Australia, she proposed and got approved a one-off "flood levy", which was a tax on people making more than $50,000 a year. The proceeds went to rebuilding after the floods.
Gillard oversaw the development of the ‘National Broadband Network’ (NBN) that was a mixed network of satellite, fiber-optic and wireless. It was first deployed in New South Wales in May 2011 and was expected to eventually provide Internet access to all of Australia.
In order to curb human trafficking, Julia sought to have all asylum seekers deported to Malaysia. The Australian High Court ruled the plan illegal in August 2011.
In June, 2013 Kevin Rudd defeated Gillard in an election for leader of the Labor Party. She resigned as Prime Minister and vowed to leave politics.
‘My Story’ Published in January 2015 is Gillard's account of her years as the Prime Minister of Australia. In it she describes her failures and successes. 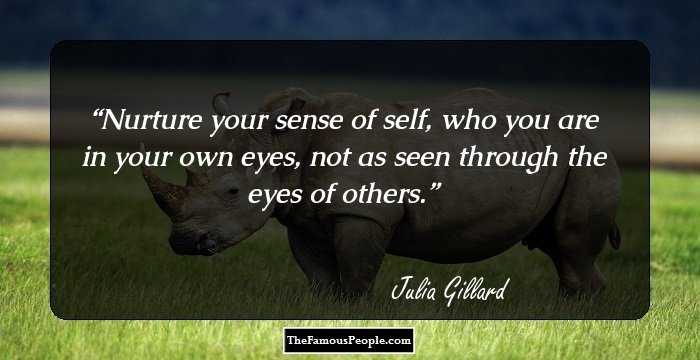 Quotes: You
Major Works
As the Prime Minister of Australia from 24 June 2010 – 27 June 2013, Gillard implemented a number of policies targeted at improving socio-economic conditions of the country. One of major contribution was the development of ‘National Broadband Network’, which aimed at providing internet access throughout Australia.
Awards & Achievements
Julia Gillard was awarded the first annual ‘Australian Award for Excellence in Women’s Leadership’ in 2014. The award was created to recognize people who have improved the chances of Australian women of getting elected to public office.
Personal Life & Legacy
Tim Mathieson has been Gillard's domestic partner since 2006. She is a self proclaimed atheist and has no children.
Trivia
In addition to being the first female Prime Minister, this famous politician was also the first unmarried Prime Minister

See the events in life of Julia Gillard in Chronological Order