Nick Hornby is an English novelist, essayist, columnist and screenwriter whose work and creativity is mostly inspired from pop culture, music and sports. He is a writer of many famous books that were later turned into famous movies like: ‘About a boy’, ‘High Fidelity’ and ‘Fever Pitch’. Many famous American actors like Hugh Grant, Colin Firth, John Cussack, etc have worked in movies adapted from his books. He was born in Surrey and brought up in Maidenhead, where he did his schooling from. His parents divorced when he was only 11 and his father, a famous businessman, inculcated love for football in him, which turned him into an ardent fan of Arsenal. His first memoir ‘Fever Pitch’ was all about his irrational love for Arsenal since his childhood days. Hornby is also a famous screenwriter and did writing for the famous film ‘An Education’ for which he was nominated for an Oscar Award. Adele
Lyricists & Songwriters #1255
Novelists #350
Screenplay Writers #44
DID WE MISS SOMEONE?
CLICK HERE AND TELL US
WE'LL MAKE SURE
THEY'RE HERE A.S.A.P
Quick Facts

British People
Novelists
Lyricists & Songwriters
Screenplay Writers
British Men
Childhood & Early Life
Nick Hornby was born on 17 April 1957 in Redhill, Surrey, England. His father was a known businessman, Sir Derek Hornby. He was raised mostly in Maidenhead and went to Maidenhead Grammar School. He studied at the Jesus College, Cambridge and took up English literature as his major.
His mother and father divorced when Hornby was only 11 years old. Around his teen years, his father started to take him to watch football matches and he became an ardent fan of the North London Premier League club Arsenal. He still calls himself as a loyal and an irrational fan of the team.
During his younger years, he became an avid reader and was always found absorbed in books. Whether it was comics or Lorrie Moore’s books, Hornby constantly and dedicatedly read. This habit of his took him to Cambridge to do his major in Literature, where he wrote stage plays, screenplays and radio plays. 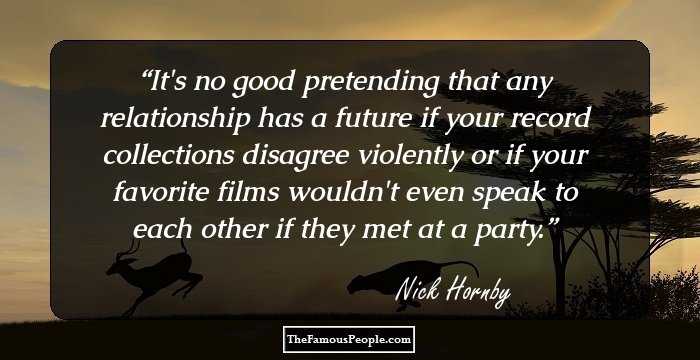 Quotes: Future, Relationship
Continue Reading Below
You May Like

Famous Beautiful Women With Green Eyes
Career
After completing his graduation from the Cambridge University, Hornby did miscellaneous jobs to support himself, all related to his interest and talent in English literature. He started with teaching at a grade school and then started giving language classes and also did hosting for Samsung executives visiting England.
Soon after this he became a paid journalist and started composing a column based on the pop culture in the Independent. He also did writing on sports for publications like Esquire and the Sunday Times. In 1992, came out his first book called ‘Contemporary American Fiction’. It was a compilation of essays on American scholars like Tobias Wolff, Ann Beattie, etc.
In the year 1992, he released his first memoir on being a dedicated and ardent lover of Arsenal fan since his younger years. It is called ‘Fever Pitch’. This book was a personal autobiographical account of his irrational love for Arsenal and it was adapted into a UK film first and then later on into an American movie in 2005. The book earned innumerable commendation and continued to be sold long after its first release.
In 1995, Hornby published his first novella called ‘High Fidelity’. The book was a success and was considered a charming account of a record shop owner whose only love is for the pop music. It is lighthearted and politically incorrect story. The book was later adapted into a movie starring the famous American actor, John Cusack, in 2000 and later in 2005 it was turned into a Broadway musical.
In 1998, his second novel called ‘About a Boy’ came out. He said that the ‘badly behaved adolescents especially the girls’ inspired him to construct this story, encounters he experienced when he was a grade school teacher. The story revolves around the odd relationship between a rich and immature bachelor, Will, and a troubled preadolescent, Marcus.
In 2001, Hornby published ‘How to Be Good’. This time his story had the female protagonist, who discovers and introspects about the modern-age ethics, the sanctity of the age-old institution of marriage and the responsibilities of parenthood. It was the winner of the W.H. Smith Award for Fiction in the year of 2002.
In 2002, he published ‘Speaking with the Angel’. It was a collection of short stories written by Hornby and his friends and edited by Hornby himself. Twelve of Hornby’s friends and well known authors wrote stories in this book and it included Hornby’s ‘NippleJesus’ in it. The book was aimed at raising funds for a charity school for autistic children in London calld ‘TreeHouse’. Hornby’s son went to the same school.
In 2003, Hornby’s compilation of essays ’31 Songs’ came out. It was also known as ‘Songbook’ in the States. The book was on explanations on various famous songs with their in-depth emotional significance. It had essays on famous songs like: ‘Nelly Furtado’s I’m Like a Bird’, ‘Led Zappelin’s Heartbreaker’, etc. It was the same year when Hornby was bestowed upon London Award 2003 by his fellow British writers.
In the year 2003, Hornby wrote a book review column for the magazine ‘The Believer’. In 2005, his book ‘A Long Way Down’ came out and in the same year, he edited anthologies called ‘My Favorite Year’ and ‘The Picador Book of Sports Writing’. In 2004, 2006, 2008 and 2012, he came up with books like ‘The Polysyllabic Spree’, ‘Housekeeping vs. The Dirt’ and ‘Shakespeare Wrote for Money’ and ‘More Baths Less Talking’.
Continue Reading Below
In 2007, Hornby tried his hand at something different and wrote a novel for the young adult readers. It was a book called ‘Slam’, a story about a teenage boy whose life changes severely after he impregnates his girlfriend. The book was awarded with the ALA Best Books for Young Adults Award in 2008.
In 2009, his novel ‘Juliet, Naked’ was released. It is a story on 1980s rock star who is shy of the attention but is compelled to re-release his famous album that brings him into contact with his most ardent fans. It is included in The Guardian’s ‘What not to miss in 2009: books’ list. In the same year, he wrote the screenplay for the film ‘An Education’, which fetched him an Academy Award nomination for the Best Adapted Screenplay category. 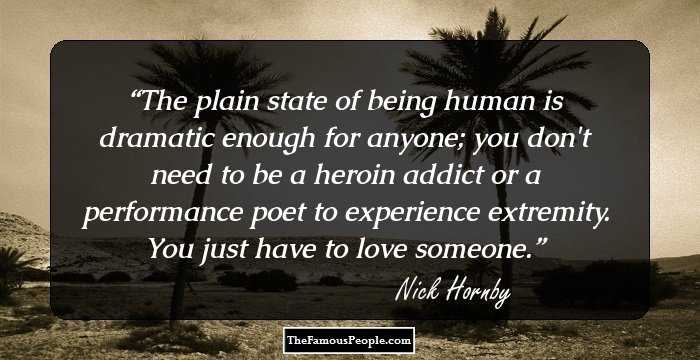 Quotes: You, Experience, Love, Need
Personal Life
Hornby and his first wife have a son together who was born in 1992. He is autistic and studies in TreeHouse - the school for autistic children in London, founded by him and his wife.
He got married for the second time to Amanda Posey, a film producer. They both have two sons together born in 2003 and 2005.
Trivia
Hornby’s books have been turned into famous Hollywood movies in which famous actors like Colin Firth, John Cusack, Hugh Grant, Jimmy Fallon, Drew Barrymore, etc have acted.
Famous American actor Johnny Depp bought the film rights to his book ‘A Long Way Down’ even before it was published.
In 2012, he discussed his bouts of depression with the media on the BBC Radio 4.
‘About a Boy’ fetched Hornby the E.M. Forster Awards from the American Academy of Arts and Letters. 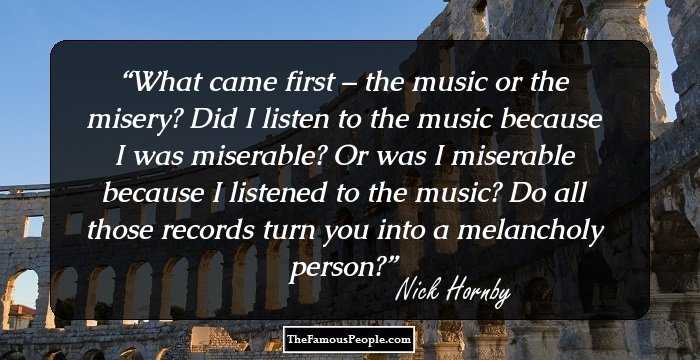 Quotes: You, Music, I

Quotes By Nick Hornby | Quote Of The Day | Top 100 Quotes

See the events in life of Nick Hornby in Chronological Order