Advanced Search
Osman I, or Osman Gazi, was the Oghuz Turkish tribal leader who founded the Ottoman Dynasty and ruled as the first sultan of the Ottoman Empire. Both the dynasty and the Ottoman Empire were named after him. According to the Ottoman tradition, his family hailed from the Kayı branch of the Oghuz Turkish tribe. Osman I founded the empire during the end of the 13th century in the Söğüt town (present-day Bilecik Province) in northwestern Anatolia. Keeping Söğüt as the base, Osman led the Muslim frontier warriors (“Ghazis”) to launch attacks on the Byzantine Empire, which was later conquered by his descendants. The state, which was just a small principality during Osman’s reign, eventually developed into a world empire with the state and the caliphate controlling most of North Africa, Western Asia, and Southeast Europe during the 14th century and the early 20th century. The Ottoman Dynasty ruled the Ottoman Empire till 1922, when the ‘Grand National Assembly of Turkey’ (GNAT) abolished the Ottoman Sultanate, deposing the imperial family from power during the Turkish War of Independence. The Republic of Turkey was declared eventually. Turkish People
Turkish Men
Male Leaders
Turkish Leaders
Turkish Emperors & Kings
Origin & Early Life
Osman bin Ertuğrul, better known as Osman I, was known to have been born in the Sultanate of Rum, a Turko–Persian Sunni Muslim state that was established in the Anatolia region. The exact date of his birth is, however, not known for sure, although according to 16th century Ottoman historian Kemalpaşazade, Osman was probably born around the middle of the 13th century, probably around 1254/55.
Osman was the son of Ertuğrul, whose father, Suleyman Shah, was the leader of the Kayı tribe of the Oghuz Turks. Ertuğrul, along with the Turkic Kayı tribe, fled to Anatolia from Western Central Asia to escape Mongol invasions and conquests. According to sources, Ertuğrul started serving the sultan of the Sultanate of Rûm and was rewarded with the dominion over the Söğüt town on the Byzantine frontier, a move that eventually led to a series of events resulting in the formation of the Ottoman Empire by Osman.
There is not much factual information available on Osman because of the paucity of authentic historical data and of the several myths and legends associated with his life that the Ottomans mentioned in later centuries. They started recording the history of his life only from the 15th century, which was after a period of 100 years following his death. There is no written source available from the time of his rule. Thus, it became extremely difficult for historians to ascertain the real facts and separate them from the myths and legends associated with his life.
Over time, different suggestions have come up regarding the origin and spelling of Osman I’s name. It was suggested by some scholars that his original name was possibly Turkish, either “Ataman” or “Atman,” and that the name was later changed to the Arabic “Osmān.” Again, the Byzantine Greek historian, philosopher, and miscellaneous writer George Pachymeres and other earlier Byzantine sources mention his name as “Ατουμάν (Atouman)” or “Ατμάν” (“Atman”). Both the Arabic version, “Uthmān,” and the Turkish version, “Osmān,” find place in the Greek sources. Suggestions state that he possibly adopted the more reputed Muslim name at a later stage.
Continue Reading Below
Conquests & Victories
Following his father’s death in c. 1280, Osman became a chief, or “bey.” There is not much authentic data available on his initial endeavors. However, it is known that he was in control of the region around Söğüt and made attacks on the Byzantine Empire from there.
The Battle of Bapheus, fought on July 27, 1302, in which the Ottoman army under Osman defeated the Byzantine army under George Mouzalon, was the first datable event associated with the life of Osman. The battle, considered the first major victory for the nascent Ottoman Dynasty, resulted in Constantinople losing the control of Bithynia, thus leading the Ottomans to eventually annex it. Following this victory, Osman started to settle his forces near the areas controlled by the Byzantine army.
It seems that Osman, in pursuit of expanding his territories, targeted the Byzantines and avoided any clash with the more mighty Turkish neighbors. Initially, he moved through the passes, from the barren lands of Phrygia to the fertile plains of Bithynia. Stanford Shaw suggested that the series of victories Osman had over the local Byzantine nobles included defeating some in battles while winning over others through peaceful measures such as getting into marriage contracts and purchase deals.
Shaw mentioned that the first real victories of Osman happened after the fall of the Seljuk authority. This saw him occupying the fortresses of Karacahisar and Eskişehir. He eventually captured Yenişehir, which was made into the capital of the Ottoman Empire.
Concerned by the rising power of Osman, the Byzantines slowly escaped the Anatolian countryside. Although their leaders made efforts to restrict Osman in expanding his empire, they remained unsuccessful. By 1308, Osman thrived in expanding his empire, both in the north, along the course of the Sakarya River, and in the southwest, toward the Sea of Marmara. His men also took part in the conquest of the city of Ephesus of Byzantine in 1308, which, however, was annexed to the domain of the Emir of Aydin.
The Siege of Bursa marked the last campaign of Osman. He, however, did not physically participate in this battle between the Ottoman Beylik and the Byzantine Empire that took place in Prusa (present-day Bursa, Turkey) from 1317/20, before it was finally captured by the Ottomans on April 6, 1326. After the city collapsed, Osman’s son and successor, Orhan, made it the first official Ottoman capital.
Family & Personal Life
Osman was married to Malhun Hatun, daughter of Ömer Abdülaziz Bey, and to Rabia Bala Hatun, daughter of Sheikh Edebali. His children included daughter Fatma and sons Alaeddin Pasha, Orhan I, Pazarlu Bey, Hamid Bey, Çoban Bey, and Melik Bey.
Although there is no concrete evidence detailing the date, time, and reason of Osman’s death, some sources mention that he passed away due to natural causes just before the collapse of the city of Bursa during the Siege of Bursa. Other sources, however, mention that he was on his death bed when he heard about the Ottoman victory of the city. He thus died sometime around 1323/24 in Bursa, Ottoman Beylik. He was interred in Bursa.
The sword of Osman remained an important sword of state and was used during the enthronement ceremony of the Ottoman sultans.
Legends
There are several legends associated with the life, the initial victories, and the heroic acts of Osman. The subjects having a romantic angle in particular, elucidating Osman’s efforts in winning over the fair Mal Hatun, remained favorites of the Ottoman writers.
Works of noted 15th century Ottoman historian Aşıkpaşazade mention a dream of Osman, the subjects of which included both Osman and Sheikh Edebali, a local religious leader of dervishes. When Osman shared his dream with Edebali, the latter explained that God had given the royal office to Osman and his descendants and that Edebali’s daughter, Malhun, shall be Osman’s wife.
Recommended Lists:
Historical Personalities #80

See the events in life of Osman I in Chronological Order 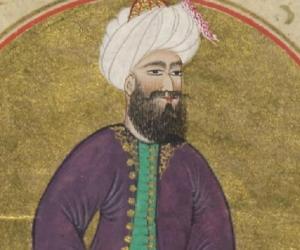