Noah Webster became one of the most distinguished lexicographers in the United States of America after he published ‘The American Speller’, which also came to be known as ‘The Blue-Backed Speller’. He was extremely obsessive about words, grammar and punctuation, which he put together in, perhaps, the most popular spelling books and dictionaries ever created at the time. Webster revealed very early on the requirement for American-English manuals, which lacked during his time. Thus, he went on to pen some of the most prominent spelling and grammar books which are even used in modern times, one of which is ‘An American Dictionary of the English Language’. He was, for half a century, among the most powerful and the most dynamic literary menfolk in the United States. Apart from being a lexicographer, he was also a well-known teacher, political writer, editor and author and was fondly known as the ‘Father of American Scholarship and Education’. Notwithstanding great milestones in the field of education, he also battled for patent laws, a sturdy centralized government, common education and also supported the abolition of slavery. Amid fighting for these causes, he wrote several textbooks, revised fortnightlies and founded the Amherst College. At the time of his demise, he was already an American icon and hero. Noam Chomsky
Educators #190
Editors #22
Linguists #14
DID WE MISS SOMEONE?
CLICK HERE AND TELL US
WE'LL MAKE SURE
THEY'RE HERE A.S.A.P
Quick Facts

American People
Educators
Linguists
Non-Fiction Writers
American Men
Childhood & Early Life
Noah Webster, Jr. was born on October 16, 1758 to Noah Sr. and Mercy, in New Hartford, Connecticut.
At the age of six, he attended a run-down primary school, which he dreaded. It was these experiences in primary school that incited him to improve the education system in America, for the future.
He studied Latin and Greek from his church pastor during his preparations to enter Yale College at the age of 14. He joined the university and then served the Connecticut Militia during the American Revolutionary War.
After he graduated from Yale, he was unsure of what career to pursue. He taught at a local school for a brief period of time, but he soon realized that the pay was very less and he needed a drastic career change. Thus, he studied law under Oliver Elisworth, while maintaining a full-time teaching job at Hartford.
Despite finding his schedule extremely taxing, he passed his bar examination in 1781. 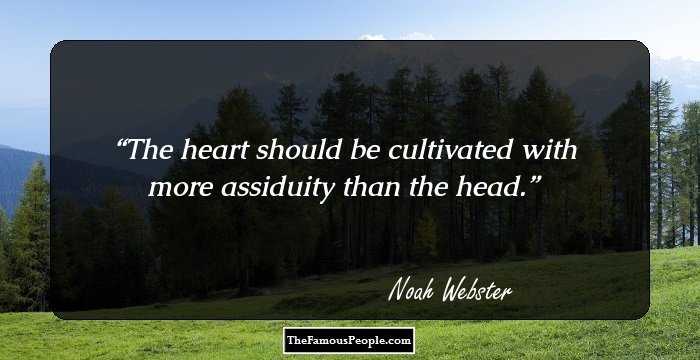 Famous Beautiful Women With Green Eyes
Career
After a few failed romances and due to the widespread unemployment owing to the ongoing Revolutionary War, he turned to bookish work and founded a private school in Goshen, New York.
He wrote his first ‘speller’ and grammar publication in 1783 titled, ‘A Grammatical Institute of the English Language’. He created this publication to deliver an academic footing for American jingoism. The book went on to earn the nickname, ‘Blue-Blacked Speller’.
In 1787, he wrote a leaflet under an alias titled ‘An Examination into the Leading Principles of the Federal Constitution Proposed by the Late Convention Held at Philadelphia’.
In 1791, he helped found the ‘Connecticut Society for the Abolition of Slavery’. Two years later, he moved to New York City to edit the ‘Federalist Party’ newspaper at $1500.
In 1793, he founded the first ‘daily’ in New York titled, ‘American Minerva’, which later came to be known as ‘Commercial Advertiser’.
In 1798, he moved back to New Haven from New York City and two years later, he was elected as a ‘Federalist’ to the ‘Connecticut House of Representatives’ in 1801 and later from 1802 to 1807.
In 1801, he began working on outlining the words that Americans used on a day-to-day basis. He did this because Americans spoke and used words in a different way than the English.
He printed his first publication that provided explanations titled, ‘A Compendious Dictionary of the English Language’, in 1806. The next year, he started to compile a fully comprehensive dictionary that would take 28 years to complete and would be known as, ‘An American Dictionary of the English Language’.
He published a brochure on global warming titled, ‘Are Our Winters Getting Warmer?’ in 1810. Around this time, he was also one of the chief founders of Amherst College, in Massachusetts, two years later.
Continue Reading Below
In 1825, he finished the dictionary in Paris, France, while he was at the University of Cambridge. His book enclosed 70,000 words, of which, 12,000 were extremely novel and had never appeared in a printed lexicon before.
In 1829, ‘The American Spelling Book’ was once again renamed to ‘The Elementary Spelling Book’.
He published his own edition of the Bible and updated the King James Version. He changed some of the words that he believed were ‘offensive’ for women, in 1833.
In 1841, another version of ‘The American Dictionary’ was printed, which was relatively unbeneficial. 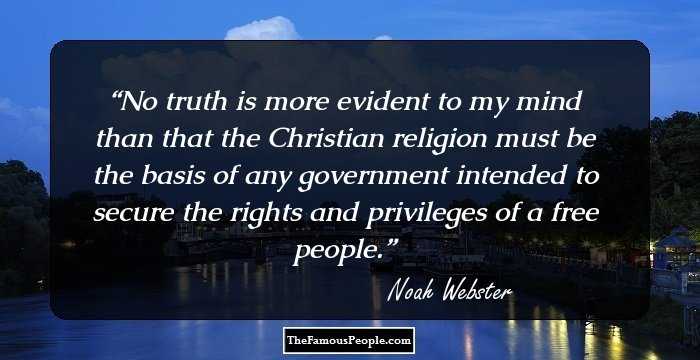 Major Works
His magnum opus, ‘An American Dictionary of the English Language’, which took twenty eight years to complete, was finally published in 1828. The book was published in two volumes, which included 70,000 entries and became a model in the world of lexicography.
The book sold quickly and went on to spawn three more editions from 1841 to 1845. It became so popular that many people believed that it exceeded Samuel Johnson’s 1755 British lexicon masterwork. It is also considered his major work, because he learnt 26 languages including Sanskrit and Anglo-Saxon, to complete his work.
Awards & Achievements
In 1823, he was awarded an honorary degree from Yale University for his achievements. 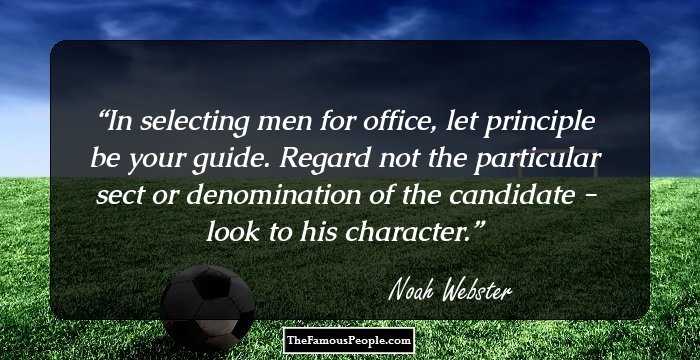 Quotes: Character
Personal Life & Legacy
He married Rebecca Greenleaf in 1789. She was the offspringof a wealthy family from Boston and the couple went on to have eight children together and a number of grandchildren.
In his early years, he was a fervent Congregationalist who believed that the whole nation should be ‘Christianized’.
He passed away on May 28, 1843 and is buried at Grove Street Cemetery in New Haven, Connecticut.
Although in the beginning, Webster’s ideas and works were poorly received; many scholars viewed his works as fundamental for shaping the educational system in the United States. His dictionaries became an example of the perfect ‘Americanism’.
Long after his death and even in the modern times, his dictionaries and works lead the English-speaking world.
Trivia
This famous American lexicographer altered the spelling of words I.e. ‘color’ for ‘colour’ and ‘theater’ for ‘theatre’. He also made sure that American students had the same diction, spelling and elucidation of these words.
Recommended Lists:
Non-Fiction Writers #93
Writers #543
Miscellaneous #2204
Intellectuals & Academics #422
Media Personalities #1336
You May Like

Quotes By Noah Webster | Quote Of The Day | Top 100 Quotes

See the events in life of Noah Webster in Chronological Order