Andreas Nikolaus "Niki" Lauda who was nicknamed ‘the rat’, later the ‘SuperRat’ and finally the ‘King Rat’ was an Austrian Formula One driver. He was a three time ‘F1 World Champion’ and till date he is he only champion driver of the two most popular and prosperous sports constructors - the ‘McLaren’ and the ‘Ferrari’. He met with a severe accident during the ‘German Grand Prix’ in 1976 when his Ferrari swerved off the track and after hitting an embankment skidded back in the path bursting into flames. Trapped in the wreckage, he inhaled toxic gases and endured severe burns. Although he made a comeback with the ‘Italian Grand Prix’ race after six weeks, his injuries left him with permanent scars. As an aviation entrepreneur he set up and ran the airlines, ‘Niki’ and ‘Lauda Air’ and was the brand ambassador of ‘Bombardier Business Aircraft’. For two years he served the ‘Jaguar’ Formula One racing team as its team manager and remained a consultant for Scuderia Ferrari. Niki Lauda was also associated with the ‘Mercedes AMG Petronas F1 Team’ as a non-executive chairman. During the ‘Grand Prix’ weekends he worked as a commentator for the ‘German TV’. Sebastian Vettel
DID WE MISS SOMEONE?
CLICK HERE AND TELL US
WE'LL MAKE SURE
THEY'RE HERE A.S.A.P
Quick Facts

Austrian Celebrities
Austrian Men
Male Sportspersons
Austrian F1 Drivers
Austrian Sportspersons
Childhood & Early Life
Niki Lauda was born on February 22, 1949, in Vienna in the family of wealthy industrialists having a chain of paper factories. He was the grandson of businessman Hans Lauda.
He could not display much potential at school and though his parents wanted him pursue business, he was determined to become a racing driver.
He manufactured a false school diploma to show his parents and convinced them to shell out money and bought his car, a VW. His very first day out with the car saw him crashing a Mini Cooper resulting in swapping his car with the wreck along with a burden of a debt of £1750.
He later swapped the wreck after necessary repairs with the 1300cc Mini Cooper S of Fritz Baumgartner, a local racing driver and was left with a debt of £650. 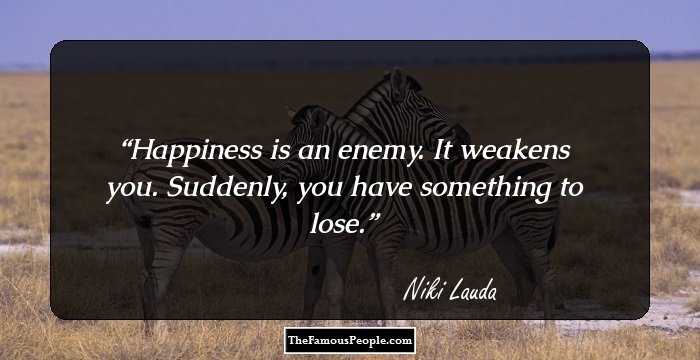 Continue Reading Below
Career
On April 15, 1968, Niki Lauda journey as a racing driver began when he participated in a motor race excelling the hills at Mühlbacken. He secured third position in the first heat and emerged first in the second heat, completing the race with an overall second position.
Though his family disapproved his choice of a racing career, his determination was unstoppable and that saw him taking twelve more starts in 1968 - three in the Cooper and the other nine in a Porsche 911.
He received a factory ride in the ‘Formula Vee’ team of ‘Austro-Kaimann’ in 1969 and participated in thirteen ‘Formula V’ races securing two wins.
He participated for Francis McNamara in ‘Formula 3’ race in 1970. With his Porsche 908, he achieved victory at the ‘Martha Grand National’ race held at Österreichring and also at the Diepholz airfield race.
In order to obtain a contract as a ‘Formula Two’ driver with the emerging ‘March’ team in 1971, Lauda took a bank loan of £30,000 against a life insurance policy. His relation with his family over his career became strained and distant with time.
Though Niki Lauda was swiftly promoted to the F1 team, in 1972 he raced both in the F1 and F2 races for ‘March’. He was able to impress Robin Herd, principal of ‘March’ with his driving capabilities, but ‘March’ faced a terrible F1 season that year.
As ‘March’ fizzled he convinced Louis Stanley at ‘BRM’ to buy a contract of the ‘BRM’ team in 1973 and took another loan in that pursuit.
His real breakthrough came in 1974 when Enzo Ferrari, owner of ‘Ferrari’ team, took interest in him and enquired and received positive feedback about him from his ‘BRM’ teammate Clay Regazzoni, when the later rejoined ‘Ferrari’. Lauda was immediately signed by Ferrari who paid him enough to wipe out his debts.
In 1974 ‘Ferrari’ revived by going through a regrouping mode under the direction of Luca di Montezemolo following its ineffective start in the 1970s and a catastrophic start in the 1973 season.
Continue Reading Below
Niki Lauda secured a second place at his debut race under ‘Ferrari’ at the ‘Argentine Grand Prix’. After three more races he won his first ‘Grand Prix’ in the ‘Spanish Grand Prix’. It was ‘Ferrari’s’ first since 1972. Despite becoming the pacesetter of the season, the only other race he won that year was the ‘Dutch GP’.
Although he was not so impressive at the beginning of 1975 F1 season, he had four wins with the new ‘Ferrari 312 T’. He secured third position in his first ‘World Championship’ at the ‘Italian Grand Prix’ held in Monza. He then went on to win the ‘United States GP’ held at the Watkins Glen village. He emerged as the first racing driver to cover the Nürburgring Nordschleife within seven minutes.
In 1976 ‘Formula 1’ season he excelled as a race driver by winning five races and getting second place in two others while securing his second and consecutive ‘World Championship’. He accumulated points more than double of that of his counterparts including James Hunt and Jody Scheckter.
Niki Lauda sought support from his fellow racers to refrain from participating in the 1976 ‘German Grand Prix’ to be held at Nürburgring mainly due to the lap’s safety arrangements, but failed.
On August 1, 1976, he met with a severe accident during the second lap of the ‘German Grand Prix’. His Ferrari swerved from the track and after hitting an embankment skidded back in the path bursting into flames. Trapped in the wreckage, he inhaled toxic gases and endured severe burns.
Although he made a comeback with the ‘Italian Grand Prix’ race after six weeks missing only three races, his injuries left him with permanent scars. He wore a special ‘AVG’ crash helmet in the race and secured the fourth position confessing that he was completely panic-stricken.
His relation with ‘Ferrari’ strained following his stand to drop out of the ‘Japanese Grand Prix’. The 1977 season was a bit arduous for him.
In 1978 he joined the Brabham drawing a salary of $1 million and won only three races.
In 1979 he suddenly took retirement from Formula 1 racing and returned to Austria to manage ‘Lauda Air’, the charter airline company that he had founded.
Continue Reading Below
He made a comeback to the racing track in 1982 after proving his mettle at the test conducted by McLaren. He won the ‘Long Beach Grand Prix’. He organised a strike of a sort with the race drivers ahead of the first race of the season to be held at the ‘Kyalami Racing Circuit’ against the initiation of the new ‘Super Licence’.
In 1984 he won the third World Championship. He won the ‘Austrian Grand Prix’ and became the first Austrian to achieve so.
In 1985 during the ‘Austrian Grand Prix’ he announced his retirement for good.
He became a consultant for ‘Ferrari’ in 1993 accepting the offer of Luca di Montezemolo.
For around two years from mid-200, he served the ‘Jaguar’ Formula One racing team as its team manager.
He was inducted by ‘Mercedes AMG Petronas F1 Team’ in September 2012 as a non-executive chairman.
He is a licensed commercial pilot and in 2003 he founded a new airline, ‘Niki’ where he often served as captain of the flights of his company.
In 2013 ‘Lauda Air’ discontinued its services.
From 1996 till present, he works as a commentator for the ‘German TV’ during the ‘Grand Prix’ weekends. 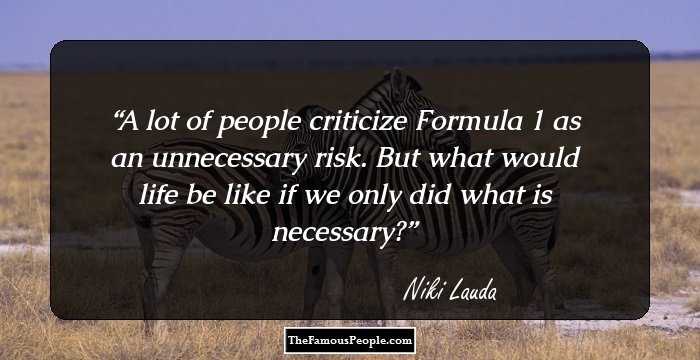 Family & Personal Life
Niki Lauda married Marlene Knaus in 1976 but the couple divorced in 1991. Their two sons are Mathias, a racing driver and Lukas who became manager of Mathias.
He had a son Christoph out of an extra-marital affair.
In 2008, Niki Lauda married his second wife, Birgit Wetzinger, who was a flight attendant in his airline. Niko Lauda was thirty years older than Birgit who bore him twin children, a boy, Max and a girl, Mia in September 2009. When his transplanted kidney from his brother failed, Birgit donated her own to Lauda.
Niki Lauda died on 20 May 2019, at the age of 70. Eight months prior to his death, he received a lung transplant.

See the events in life of Niki Lauda in Chronological Order