Fernando Alonso Diaz is a Formula One race driver from Spain. He started his racing career early and entered the world of Formula One after successive wins at the junior level. His entry on the racing circuit with successive championships in the mid-2000s marked the end of the Michael Schumacher era. A driver of undeniable talent, he first became Formula One World Drivers’ Champion during his stint with Renault in 2005. In his first race of the 2005 season in Australia, Alonso shrugged off a beginning from the second tier of the grid to finish on the podium with a third-place finish. He then went on win the successive two races. The dream run continued, and his consistent form and daring style made him the youngest F1 champion at that point of time. An encore in the 2006 season made him the youngest double champion in the sport’s history. He has since been associated with several other teams, including McLaren, Mercedes and Ferrari. Although he has not managed to win any more championships since 2006, he remains one of the most respected drivers on the circuit, alongside Kimi Räikkönen, Sebastian Vettel and Lewis Hamilton. Thanks to his career statistics, his position as one of the greatest F1 drivers of all time is secure. B.J. McLeod
29th July In History
DID WE MISS SOMEONE?
CLICK HERE AND TELL US
WE'LL MAKE SURE
THEY'RE HERE A.S.A.P
Quick Facts

Spanish People
Race Car Drivers
Spanish Men
Male Sportspersons
Spanish Sportspersons
Childhood & Early Life
Fernando Alonso Díaz was born on 29 July 1981 in Oviedo, Spain. He has an older sister, Lorena Diaz. He inherited his love for cars and racing from his father, who was an amateur kart racer. Fernando participated in karting competitions in Spain and won many trophies.
His victories ensured sponsors and funds, and he won consecutive Spanish championships in the junior category for four years in a row from 1993 to 1996. He also won the Junior World Cup in 1996. Later, he won the Spanish Inter-A title.
He attended the Holy Guardian Angel Primary School and later enrolled in the Institute Leopoldo Alas Clarin. However, he dropped out of school in 2000, owing to his passion for racing. 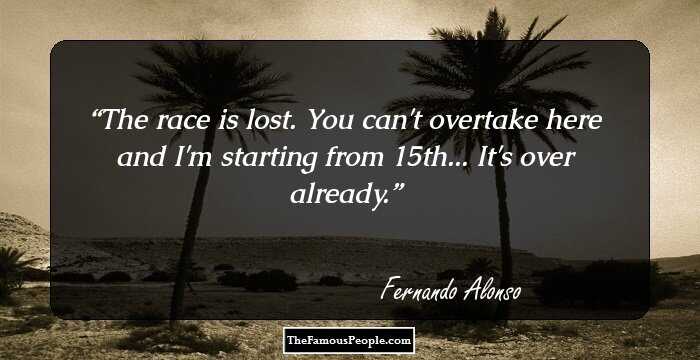 Continue Reading Below
Career
Fernando Alonso was signed by Adrian Campos in 1998 to compete in the 1999 Spanish Euro Open. He won the championship by a whisker and set a record. He moved up to Formula 3000, a stepping stone to Formula One. He ended fourth in the season. He tested with Minardi M01 and M02 to enter Formula One.
In 2001, he made his Formula One debut at the Australian Grand Prix with Minardi. His performance was impressive, as he outqualified his teammates at times. However, his best finish was finishing at 10th at the German Grand Prix.
In 2002, he became the test driver for Renault and completed 1600+ laps of testing. He also earned a second seat alongside Jarno Trulli. He went on to win The Hungarian Grand Prix and stood at the sixth spot. He continued his association with Renault until 2006 and clocked impressive performances.
In 2005, he won the San Marino Grand Prix. However, he failed to make an impression during the Canadian and United States Grands Prix. At the British Grand Prix, Alonso and Kimi Räikkönen raced to win the title. He continued performing well and collected several championship points.
At the 2005 Brazil Prix, Alonso defeated Michael Schumacher and still considers it among his greatest races. He was awarded the Prince of Asturias Award for his victory in Brazil.
He began the 2006 season with victories in Bahrain and later at Australian and Monaco Grand Prix. His winning streak continued in Britain and Canada, and he became the first driver to finish first/second in the first 9 races of the season. At the end of the season, he won the coveted championship.
In 2007, he moved to McLaren and made his debut with their car in January. He won his first race for the team at the Malaysian Grand Prix. He also won at Monaco and Nürburgring Grand Prix. His controversial actions at the Hungarian Grand Prix soured his relations with the team, and he left at the end of the season.
Alonso returned to Renault in 2008. He started with late finishes and sparked the rumors that he would leave, but he stayed. He won the Singapore Grand Prix and performed strongly at the Italian and Japanese Grands Prix. At the end of the season, he finished fifth.
In 2009, he struggled with the early races. His only podium performance was at the Singapore race, in which he finished third. He dedicated his win to Flavio Briatore, his boss who had just passed away. He finished ninth in the season.
Continue Reading Below
He moved to Ferrari in 2010. He won the race at Bahrain but didn’t convert the other races into anything spectacular. His win at the German Grand Prix that year also attracted controversy.
He ended the 2010 season after scoring his fastest lap and earning the DHL Fastest Lap Award.
In 2011, he took the podium at the Turkish Grand Prix and stayed with Ferrari. He continued leading in Germany, Hungary, Italy, and Japan, thus earning more podium finishes.
In 2012, he won at the Malaysian Grand Prix and finished third in Monaco. Other races that year witnessed dramatic crashes and accidents. He ended the year at the fourth spot. Year 2013 was like his run in 2012, but he won the Spanish Grand Prix and finished second.
He came close to winning the Hungarian Grand Prix in 2014 but was overtaken by Daniel Ricciardo. He finished sixth at the end of the championship. This was also his last season with Ferrari.
Alonso returned to McLaren in 2015. His year began with an accident, which meant he missed many races. He took part in the Malaysian Gran Prix but only scored at the British Grand Prix. He failed to score points for the rest of the season.
In 2016, he met with another accident and missed some matches. Upon his return, he finished sixth at the Russian Grand Prix. He failed to make any other podium finishes. His luck eluded him in 2017, but he stayed with McLaren nonetheless.
In 2018, he finished fifth at the Australian Grand Prix. Later in August 2018, he announced that he would not race in Formula One anymore. He has since moved on to Indianapolis races.
Apart from racing, Alonso is a co-founder of Kimoa, a fashion brand. The company focuses on creating beachwear. Kimoa also became the official partner of McLaren in 2018. 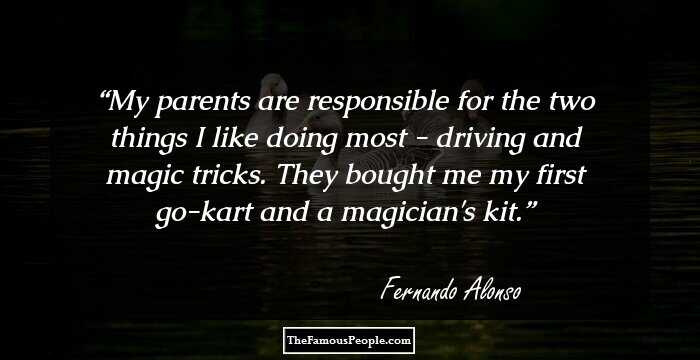 Awards & Achievements
Among many grand finishes and championships, Fernando Alonso is best remembered for the fastest lap clocked in 2017. He received the 2017 Fastest Rookie award for the same. He was later named the Indianapolis 500 Rookie of the Year.
Family & Personal Life
Fernando Alonso married Spanish pop singer Raquel del Rosario in November 2006, but the couple separated and divorced in 2011. After his divorce, Alonso had brief relationships with Dasha Kapustina, a model, and Lara Alvarez, a journalist.
He is currently in a relationship with Linda Morselli, an Italian model. He is currently based out of Dubai and often changes his address to negate tax penalties.
Alonso has opened his museum in Oviedo, his hometown, and has dedicated himself to filling it up with his racing memorabilia. 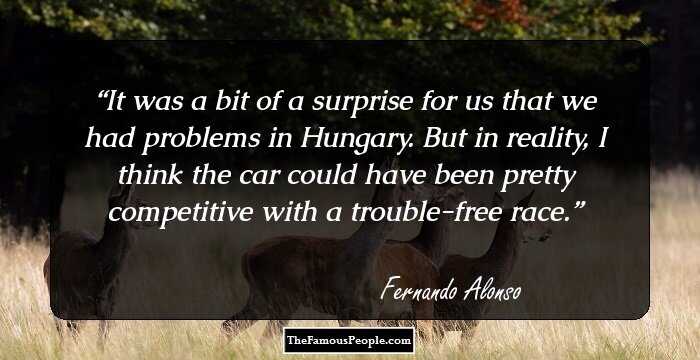 Trivia
Fernando Alonso loves cycling and often engages in competitive cycling to keep himself fit and prepare for upcoming races.
He sports a samurai tattoo on his back.

Quotes By Fernando Alonso | Quote Of The Day | Top 100 Quotes

See the events in life of Fernando Alonso in Chronological Order