Lewis Carl Davidson Hamilton is a British Formula One racing driver who is presently under a contract with the pro team, ‘Mercedes AMG Petronas.’ In his debut season in 2007, Lewis lost the ‘World Championship’ by just a single point, becoming one of the best racing talents to look out for. Since then, Lewis hasn’t disappointed his fans and his team. He has gone on to become one of the top F1 racers in the world with seven ‘World Championships’ in his highly successful career so far. He is known as an all-rounder on the track as there is hardly an aspect of Formula 1 racing that he hasn’t excelled. With the most number of career points and most number of victories in different circuits, he has been the most successful British F1 driver of all time. He also has set the record for most wins in a single season without being victorious in the ‘World Championship’ in 2016. Hamilton keeps growing as a racer and is already standing amongst the greatest Formula One drivers of all time. He is often compared to the ace racer Michael Schumacher. Gilles Villeneuve
DID WE MISS SOMEONE?
CLICK HERE AND TELL US
WE'LL MAKE SURE
THEY'RE HERE A.S.A.P
Quick Facts

awards: Member of the Order of the British Empire
Laureus World Sports Award for Breakthrough of the Year

British People
Race Car Drivers
Black Sportspersons
British Men
Male Sportspersons
Childhood & Early Life
Lewis Hamilton was born on 7th January 1985, in Hertfordshire, England, to Carmen and Anthony Hamilton. Lewis went on to live with his mother after his parents got separated while he was a toddler. Later, in his early teenage years, he went on to live with his father and step-brother, Nicolas, who also happens to be a professional racer.
Lewis’ fascination for cars started at an early age when his father gifted him a remote control car when he was six years old. He got fascinated with it and performed extraordinarily well in the local competitions. His father saw the budding talent in his son and gifted him a go-kart as a Christmas present.
Hamilton played football in school and continued playing throughout his stay at ‘The John Henry Newman School.’ He would later say that he considered being a footballer at some point in time, but the go-kart championships that he continued to win offered him a better career choice. At the age of 15, Lewis was named Karting number one player, a record which he still holds to this day. 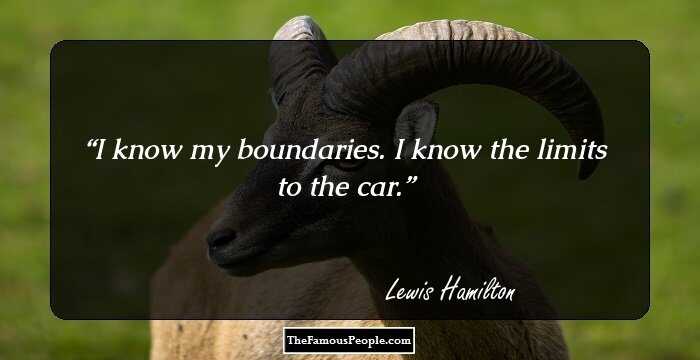 Continue Reading Below
Career
Lewis Hamilton started his big league racing career with ‘British Formula Renault Winter Series’ in 2001. Despite a rocky start and a crash during the race, he still finished fifth. His performance helped him secure a place in the 2002 ‘Formula Renault UK Campaign,’ where he finished third. Racing for ‘Manor Motorsport,’ he presented himself as one of the most talented youngsters to look out for.
His exceptional performance in ‘Formula Three’ provided him with an opportunity to race in the ‘ART Grand Prix’ in 2006. In his very first attempt, Lewis scored a victory at the ‘GP2 Championship,’ racing against the likes of Timo Glock and Nelson Piquet. Lewis made his F1 debut in 2007 at the ‘Australian Grand Prix,’ where he finished third despite a crash. Later in the Bahrain and Barcelona F1 events, Lewis finished second.
Post a controversial qualifying season, Hamilton emerged a winner in the ‘Hungarian Grand Prix’ and finished fifth in the ‘Turkish Grand Prix.’ However, the rest of the year was uneventful with no remarkable victory.
In the beginning of 2008, Hamilton signed a contract with ‘McLaren-Mercedes’ to stay with them until the end of 2012. In the first race of the season, Lewis ended up scoring a victory in the ‘Australian Grand Prix.’ He won ‘Monaco Grand Prix’ and was the first runner-up in Turkey and later secured a victory in the ‘British Grand Prix.’
Hamilton took a seven point lead into the ‘World Championship’ during the ‘Chinese Grand Prix’ by winning the race. Later, when he needed to secure at least the fifth position in the ‘Brazil Grand Prix,’ he secured the fourth spot and became the youngest ‘Formula One World Champion.’ In 2009, Lewis scored the tenth victory of his career at Hungaroring, and earned the first runner up spot in Valencia. By the end of the season, he received one more title by winning the ‘Singapore Grand Prix.’
In the 2010 season, Lewis scored his first victory in the ‘Turkish Grand Prix’ and performed average in the ‘Australian’ and ‘Chinese Grand Prix.’ In the ‘Japan,’ ‘South Korea,’ and ‘Brazil Grand Prix,’ Lewis finished at fifth, second, and fourth spots respectively.
At the start of the 2011 season, Hamilton secured the second spot in the ‘Australian Grand Prix’ and got his first win of the season in the ‘Chinese Grand Prix.’ At the end of the season, Lewis secured another victory in Abu Dhabi.
Lewis Hamilton joined ‘Mercedes Benz Works Team’ in late 2012. In the next season, after coming up with average performances at the ‘Australian,’ ‘Malaysian,’ and ‘Chinese Grand Prix,’ he achieved his first victory for ‘Mercedes’ by winning the ‘Hungarian Grand Prix.’ Thanks to a victory in China in 2014, Lewis achieved his first career hat-trick by winning three races consecutively. He later converted that into four victories in a row with a win in Spain.
He later went on to win the ‘Singapore’ and ‘Italian Grand Prix.’ He also won the ‘Japanese Grand Prix,’ and after winning in Abu Dhabi, he beat his own teammate Rosberg by 67 points to emerge as the World Champion. By that time, Lewis had already become one of the most popular racers in the world. At the end of 2014, he received the ‘BBC Sports Personality of the Year’ honor.
Continue Reading Below
‘Mercedes’ became the dominant team in the Formula One arena and Hamilton became one of its biggest assets. Hamilton started the 2015 season with a win in the ‘Australian Grand Prix.’ ‘Mercedes’ signed him on for the next three years until the end of the 2018 season and Lewis celebrated the contract extension with a victory in Spa and Monza. By the end of 2015, Lewis had won the ‘United State Grand Prix,’ securing his third ‘World Championship.’
In the 2016 season, Hamilton earned the second spot in the ‘Australian Grand Prix’ and won the ‘British Grand Prix’ later that year. Subsequent wins in the US, Mexico, and Brazil strengthened his claim to the ‘World Championship.’ When he had to win the race at the ‘Abu Dhabi Grand Prix’ to become the World Champion, he lost to Rosberg.
Hamilton started the 2017 season with a win in the ‘Chinese Grand Prix’ and finishing second in the ‘Australian Grand Prix.’ He won in Spain, securing his first title win of the season. He was at his best, winning the ‘British,’ ‘Belgium,’ ‘Italy,’ and ‘Singapore Grand Prix’ and also surpassing Michael Schumacher for the most pole positions of all time. He subsequently clinched his fourth ‘World Championship’ in 2017 by leading in the ‘United States Grand Prix’ and finishing with 363 points in the ‘Abu Dhabi Grand Prix.’
In 2018, Hamilton won his first race of the season in Azerbaijan and then won in Spain. After an average performance in Monaco and Canada, Hamilton took the lead in the ‘French Grand Prix,’ wining by pole. He then extended his contract with ‘Mercedes’ for a period of two years prior to the ‘German Grand Prix.’
After a tough fight with Sebastian Vettel, who was also eyeing his fifth championship this season, Hamilton secured his lead in the ‘Hungarian,’ ‘Singapore,’ and ‘Russian Grand Prix.’ After a commanding win in Japan, he won his fifth championship at the ‘Mexican Grand Prix.’ He also set a new record for most points scored in a season after his consecutive wins in Brazil and Abu Dhabi. Subsequently, ‘Mercedes’ extended its contract with Hamilton until 2020. 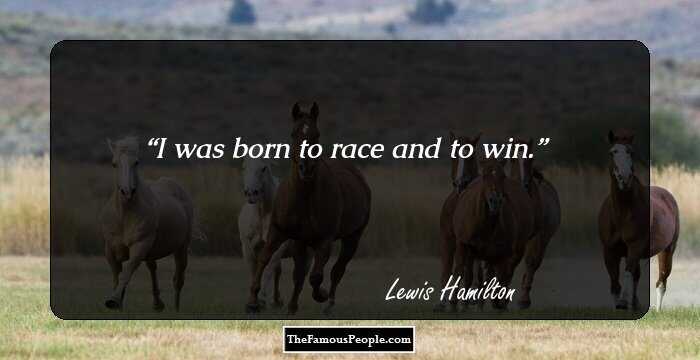 Personal Life
Lewis Hamilton was in a relationship with popular American singer Nicole Scherzinger. After a lot of speculations about them splitting up and getting back together, they finally called it quits in 2015. They cited their busy schedules as the reason for their separation.
Lewis Hamilton presently lives in Monaco after shifting from Switzerland. He doesn’t like living in the UK due to constant media intrusion into his personal life.
He collaborated with designer Tommy Hilfiger and launched a clothing line called ‘TOMMYXLEWIS’ in 2018.
Hamilton has courted controversies for apparent tax evasion and for making crude remarks, hurting the sentiment of his fans and LGBT activists.
Trivia
He became a vegan and also quit consuming alcohol. 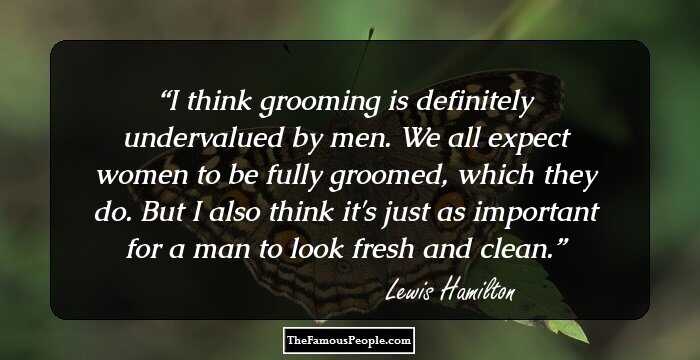 Quotes By Lewis Hamilton | Quote Of The Day | Top 100 Quotes

See the events in life of Lewis Hamilton in Chronological Order